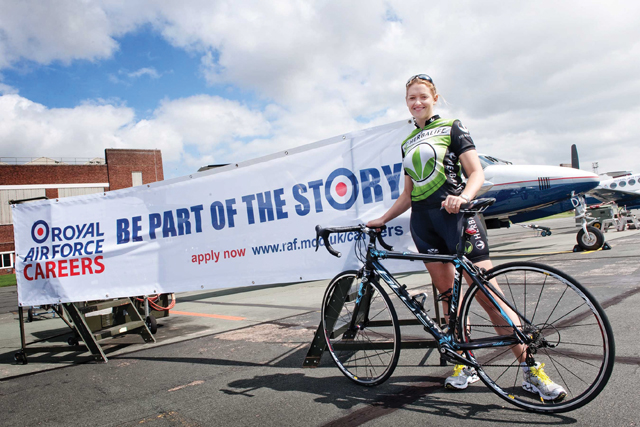 She looks like any other woman out running along the riverside paths on the outskirts of Lincoln, her blonde hair tied back and her pet dog trotting along at her heels. This particular jogger, however, is Flight Lieutenant Rachael Cadman, RAF – a world-class triathlete and leading light in the rapidly growing field of ultra-marathons.
Rachael, aged thirty, made history last summer when she became the first woman, and only the eighth person, to complete what is called, among the hardy souls who indulge in the sport, ‘the most gruelling and most challenging endurance event known to man.’

The event is the Enduroman Arch2Arc Challenge, the world’s hardest triathlon – an eighty-seven-mile run from London’s Marble Arch to Dover, a twenty-three-mile Channel swim then a 187-mile cycle from Calais to the Arc de Triomphe in Paris. As well as completing the course in the prescribed five days, Rachael raised money for the charities Help for Heroes and Shelter Box.

Since that final two-wheeled dash along the Champs-Élysées the accolades have poured in: RAF Sportswoman of the Year 2011; guest of honour at the Lincolnshire Sports Awards, at the Lincolnshire Showground in November; and feted by her sponsor Herbalife at a ceremony in Barcelona.

Rachael will hear in March if she has been awarded the prestigious honour of being Combined Services Sportswoman of the Year at a ceremony at the RAF Club in London. She is also tipped to secure a place on the GB team for the Triathlon World Championships in April.

“I’m surprised and flattered by the attention I’ve been getting. I’m sure there are other just-as-worthy people out there,” she told Lincolnshire Life with her usual modesty.

“I’m just so pleased that I did it. It was pretty daunting,” she said, “but I had been working up to it for some time and raising money for Help for Heroes and Shelter Box disaster relief is a great motivation to see it through.

“It was the culmination of a couple of years of training and preparation. And, of course, I couldn’t have done it without the support of my loved ones and friends. Some people suggest not having those closest to you on your support team as it can make you too emotional but I knew I needed Adam and his father, Michael, with me every step of the way.”

Fellow RAF officer and fiancée, Adam, who she calls “her rock” lives with Rachael by the Marina in Burton Waters with her other training partner Heidi, a German Shepherd and Labrador cross.

When she’s not swimming the Channel or running back-to-back marathons Rachael’s day job is based at RAF Cranwell, where she arranges the training packages for Air Cadet officers. Being in the RAF is the perfect job for someone with high sporting ambitions.

“The great thing about being in the Royal Air Force is that, as an organisation, it is committed to helping people reach their potential and achieve their ambitions. I have had a great deal of support from the RAF with flexibility over training and competing.”

Her Commanding Officer, Air Commodore Barbara Cooper, said: “Everyone in the RAF is extremely proud of Rachael. She has incredible determination and no shortage of courage to have undertaken a challenge of this magnitude.”

The RAF’s support and pride manifested itself shortly after Rachael set off on the hardest part of her Arch2Arc Challenge, the Channel swim. Shortly after she had dived into the waves off Shakespeare Beach, Dover, the ultimate good luck flourish was performed by a Lancaster bomber of the Battle of Britain Memorial Flight, which circled above her.

Rachael said: “I felt my usual nervous self before the start of the swim but I settled down in the water. The throb of engines made me look up. There was the Lancaster circling me. It was a huge moment and a very proud one. I’d been honoured by the service and I felt even more determined to finish.

“The swim was my strong point. I’d been here before with two Channel relays so I understood what the sea might throw at me. A solo swim was going to be somewhat different but I had put in the hours of training and felt I had a good chance. If anything was going to beat me it would be the weather. If things got too rough the pilot had the responsibility to call off my attempt.”

During her sixteen-hour overnight swim Rachael battled a heavy swell and twenty-five knot winds that came close to sinking her bid. More than once the pilot of the support boat came close to calling off the attempt because of the swell. What should have been a twenty-three mile crossing was turned into a thirty-four mile swim by the changing tides.

Rachael started swimming at the age of nine. The running and cycling came much later, during her second spell at university. She gained a BSc in Natural Sciences from Durham University then worked as a business analyst in the City before being drawn to her passion, swimming, working as an assistant regional development officer for British Swimming. She also spent some time working for the Lincolnshire Sports Partnership. Rachael joined the RAF in 2007 after completing an Msc in Sports Science at Leeds Metropolitan University where she ran her first half-marathon.

Truly bitten by the bug she ran the London Marathon in the same year, then embarked on an unbelievably daunting 160km desert foot race, the Libyan Challenge, becoming one of only six women to finish. This was followed by an invitation to take part in a six-day adventure race in Tasmania.

In 2010 she completed the Iron Man Switzerland, then won the UK Double Iron Man – swimming 4.8 miles, cycling 224 miles then running a double marathon without sleeping – before taking on the Lanzarote Ultra, a mere two weeks later. She was only the fifth person ever to complete the Ultra. All of which, along with the occasional fifty-mile training run, was ideal preparation for her Arch2Arc attempt, the hardest challenge she has ever taken on.

Or maybe not, because this year she and Adam are getting married. Despite much musing about where to hold the ceremony to keep both families happy, the pair have decided to tie the knot in Florence followed by a honeymoon on the Amalfi coast. “Good food, good wine and great weather,” she explained. And the dress? “All I can say is that it came from Belle and Bouquet at Wellingore Hall.”

When she isn’t snacking on high-energy foods as part of a training regime, Rachael loves to bake: “I am getting quite accomplished. It’s relaxing.” And she buys her ingredients at Doddington Hall Farm Shop where she loves to potter with Adam, taking in the sights and smells. Her other Lincolnshire love is, of course, the cathedral where she attended midnight mass with Adam on Christmas Eve.

It is hard to believe that marriage is the only challenge on the horizon for this remarkable woman. “Well,” she added, “I have to settle down. But there is something else that I’ve heard about recently that I may have a bash at…”