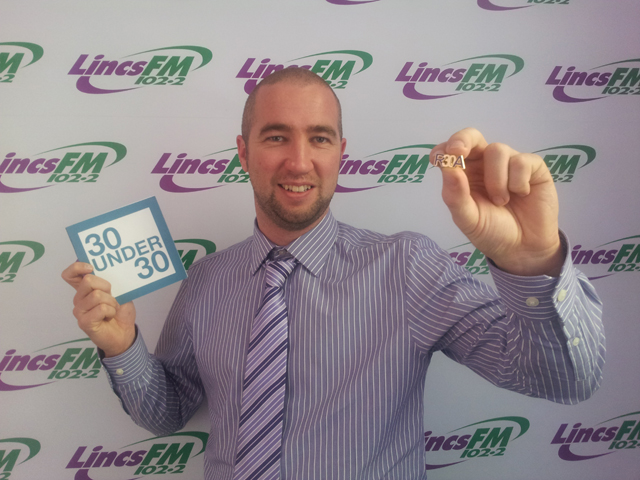 There have been double celebrations for Lincolnshire and Newark’s most listened to radio station, Lincs FM.
The station’s chief executive and its Group finance manager have both been recognised at national level, after being handed awards at the annual Radio Festival, in front of the country’s cream of broadcasting talent from across the radio industry.

Chief executive, Michael Betton was surprised with a Fellowship to the Radio Academy – the highest honour handed out by the Academy – in recognition of his work for commercial radio, over three decades.

Michael started his radio career with Radio Orwell in Ipswich, before becoming the programme controller of Ocean Sound in 1986 and its managing director in 1990. In 1991 he left to set up Lincs FM, applying for the newly advertised licence in Lincoln and, having won that licence and launched the station in 1992, he’s been instrumental in growing the group – which now includes eight radio stations and is one of the most successful independently run group of radio stations in the country.

The award was made at a gala dinner, held during this year’s Radio Festival in Manchester. Festival chairman, Chris Burns said: “The PPL Gala Dinner is always an exciting night of celebration for the industry. The evening acknowledges those people who have shone continuously in their chosen medium and who have brought fascinating and inspiring content to audiences. It also gives the radio industry the chance to recognise and thank individuals who have had a major impact on the music scene in many different ways.”

It is not the first time that Lincs FM’s chief executive has received such recognition, as earlier in the year he was also named on the commercial radio body RadioCentre Roll of Honour, aimed at marking forty years since the launch of commercial radio in the UK.

Also honoured at this year’s Radio Festival was Steven Childs, named one of radio’s ‘30 Under 30’ – recognising thirty people, under the age of thirty, who’ve made a significant contribution to the radio industry this year.

Steven is the Lincs FM Group finance manager, overseeing the day-to-day running of the accounts for all eight radio stations. He’s also recently taken control of the station’s ‘traffic department’ – the people who schedule the commercial messages you hear day and night on Lincs FM and its sister stations. He’s also made best use of technology to train staff, working closely with members of the sales team and the chief executive. And if you’ve ever seen Lincs FM staff out and about at the many events they attend each week, then chances are you’ll have seen Steven helping to promote the station.

The judges for the 30 Under 30 said: “Steven’s inclusion signifies the importance of a range of skills to a successful radio industry: as Group finance manager for Lincs FM, he not only runs the accounts for eight stations, but also oversees traffic and is a real team player, always willing to step in to support his colleagues.”

While the celebrations for Michael and Steven continue, with winter now upon us, Lincs FM is preparing for one of its busiest times of the year. As the weather turns, people know to turn to Lincs FM for vital school closure or travel information but it’s not all serious news.

Director of programming, Sean Dunderdale told Lincolnshire Life: “There’s certainly no rest for the Lincs FM team, radio doesn’t stop – we’re relied upon twenty-four hours a day – and it’s great that many people across Lincolnshire and Newark say that we add a little extra magic to the festive period. We know, on Christmas morning, people enjoy switching on the radio, hearing the Christmas tunes while opening their presents, cooking and even sitting down to eat their Christmas Dinner with us. We’re a part of their Christmas and they’re a part of ours.”

And of course, once the festive period is over, it’s on to a new year – and the station has big plans for 2014, which we’ll explore in more detail in the March issue of Lincolnshire Life.