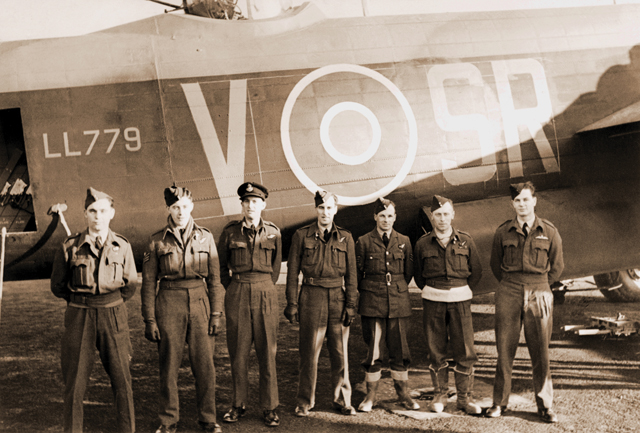 During the height of the war, Lincolnshire would resound nightly to the deafening roar of heavily-laden bombers as they thundered down the runway, striving to take to the air. Night after night out over the dark forbidding North Sea they went, on bombing raids over enemy territory from which some would not return. One such raid, in which 101 Squadron was heavily involved, was on 4th November 1944.

Part two
The weather forecast across Lincolnshire for the evening was given as being dry but cloudy to begin with. Breaks in the cloud were expected to develop later, allowing one or two mist patches to form in sheltered locations. But despite the cloud and wind, temperatures would be around 51 deg. F., average for early November. With a fresh to strong south westerly wind developing, a breezy evening was expected.

From early morning, the ground staff had been preparing twenty-five of its forty-two aircraft to take part in one of the biggest bombing raids of the Second World War – a concentrated attack on Bochum, a heavily industrialised city in the Rhur Valley, with a huge steelworks at its centre. The main bomber force would consist of 749 aircraft, including 336 Lancasters and 384 Halifaxes, preceded by twenty-nine Pathfinder Mosquitos to pinpoint and illuminate the target.

At 17.09 the first Lancaster took off, followed by the rest at two-minute intervals. Each aircraft was loaded with a 4,000 lb. high explosive bomb, a varied assortment of cluster bombs, incendiaries and target indicators. Approximately five hours later, all came home safely, except for two. Sixteen men lost their lives, including that of my friend George.

Apart from massive damage to Bochum’s industrial area, the centre of the city was also badly hit, with more than 4,000 buildings being seriously damaged or destroyed. The men who perished are commemorated on the Roll of Honour in the village church, and the Squadron is permanently commemorated on a memorial stone on the A631 in the village.

SGT GEORGE KESTEN
George was a Polish Jew born in Berlin in 1922. He was also educated in Berlin. I first met him by chance in London in August 1943, just three months after he and his family had been driven out of their home by the Gestapo. We were standing in line outside Lord’s Cricket Ground, which had been taken over by the Air Ministry for the purpose of inducting aircrew hopefuls into the Service.

George and I got on well right from the start. He was three years older than me – an intelligent young man who was also fluent in English and French. When I first saw him, I was struck by his unkempt appearance, but I realised later that was due to him having lived rough since he escaped Germany, the circumstances surrounding which I have never been able to forget:

“They came down the street shouting and bawling, banging their rifle butts on the front doors and forcing their way into the houses. We had been expecting them, because we knew they were in the area. I could hear my neighbour screaming. My mother, father and sister fled out of the back door, but I waited until the Police were literally in the house next door before I followed them. We each split up in different directions, taking with us only a few belongings in an attaché case. Everything else in the house was left exactly as it was.”

George and I stuck together like glue until we had completed our courses and been made up to Sergeants, but all the time it was clear that he had a deep hatred for the Nazis, especially the Gestapo.

RHEINBERG
Rheinberg (a peaceful place if ever there was), is a few miles slightly north-west of Essen, with the cemetery situated just south of the town. George’s grave is just one of 935,589 identified Commonwealth graves throughout the world under the loving care of the Commonwealth War Graves Commission. George and the rest of his crew, including six Canadians, were originally buried at Holsten in 1944, before being re-buried in Rheinberg more than two-and-a-half years later, in July 1947, on land given by the German Government.

I feel happier now I know where George is, after wondering for so long. It had bothered me over the years. Although the crew are buried together in a collective grave, each one has his own individual headstone. I studied them carefully, especially George’s, with its Star of David and the inscription, ‘Rest in Peace’, but I was strangely moved by the sight of the headstone of one of the air gunners – a young officer of the Royal Canadian Air Force. He was only nineteen years of age when he died, same age as I was that year. We weren’t much more than kids, really.

The Red Cross traced George’s sister to Switzerland. Although George knew that before he died, he was unable to contact her owing to communication difficulties at the time. His mother and father perished in Poland in the Holocaust – just two of approximately three million Polish Jews who were murdered in that country, most of them dying from starvation and disease in the overcrowded camps.

I must express my appreciation for the help and encouragement I have received whilst researching this article (the interest in the subject has surprised me). In particular, I must mention Sarah Quinn of the Commonwealth War Graves Commission, Rosanna Wilkinson of The Imperial War Museum, The National Archives at Kew, The RAF Museum at Hendon, Steve Rogers of The War Graves Photographic Project, Steve Jebson of the Met Office in Exeter, Lincolnshire-based Gerry Collins and Philip Johnston-Davis, and last but not least, Cairo-based Mike Booker.

All of them provided me with much valuable information, and in some cases made access to rare photographs and documents easier. Also, I must acknowledge Martin Sugarman’s fascinating and highly detailed account of the Jewish RAF Specialist Operators in Radio Counter Measures with 101 Squadron.