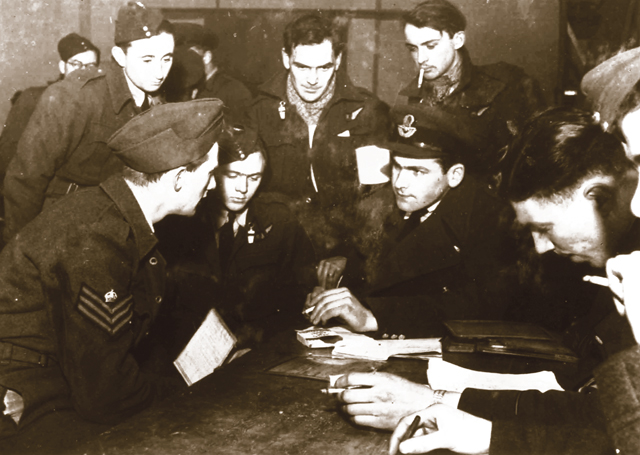 When I first thought of writing this article, it was intended to be nothing more than a simple tribute to my long-lost pal Sergeant George Kesten, even though I had not seen him since 1944.

Part one
We had just completed thirteen months of aircrew training, during which time we had become close friends, but one morning in the third week of September, he was whisked away in an RAF staff car, and I never saw or heard of him again. Nobody knew where he went – not even our CO.

And George didn’t know where he was going either.

Sixty-four years later, I decided to look for him. He had never been far out of my mind really, but I had always wanted to know where he had gone all those years ago, and what had happened to him, so I wrote to The Commonwealth War Graves Commission to ask for their help. Had I not done so, I might still be in the dark.

The stark reality of the reply I received from the CWGC a month later came as an emotional shock. I learned that George had been killed in action on 4th November 1944 (just six weeks after I last saw him), whilst serving with 101 Squadron based at Ludford Magna, near Market Rasen in Lincolnshire, and that he was buried in a collective grave in a CWGC cemetery at Rheinberg, West Germany.

I could have left it there – at least I would have known what had happened to him – but feeling compelled to retrace his footsteps from the moment I last saw him, to the point where he finished up in that cemetery, I embarked on a research trail over the following two years which led me from the United Kingdom to the United States – and then to Cairo of all places.

The more I delved, the more the parameters kept expanding. More and more information came pouring in as more and more people became interested in the questions I was asking. One source would surely lead me to another. But all the time I was being reminded that George was after all only one of more than 55,000 Bomber Command aircrew who died in the service of our country – all fit young men with everything to look forward to who gave up their lives for us. We should not forget that.

I cannot describe adequately the bravery and courage of all those who flew with 101 Squadron and the sacrifices they made. Each of them knew that his chance of surviving a tour of operations was minimal. Rather than being a simple eulogy to my friend George, my thoughts go out to all RAF Bomber Command aircrew – those who are still with us who took part in the bombing campaigns of the Second World War – and those who are long gone. I take my hat off to every one of them. It just so happened that I was one of the lucky ones.

101 SQUADRON
From 15th June 1943, to 1st October 1945, the period during which it was based at Ludford Magna, the squadron was engaged in a highly secret telecommunications war against the enemy, much of which is still classified to this day. But one thing is certain: due to the extremely dangerous nature of its work, which resulted in 1,176 aircrew losing their lives, the squadron suffered greater casualties than almost any other squadron in Bomber Command during the Second World War.

With forty-two Lancasters on strength, and more than 300 aircrew and several hundred ground staff stationed there, 101 was a huge outfit. The most successful four-engine strategic bomber of the Second World War, the Lancaster had a bomb bay that stretched over two-thirds of the length of its fuselage, allowing it to carry far greater loads than any other bomber in the European theatre. Although its average load was 12,000 lbs, towards the end of the war, this remarkable aircraft was delivering the Grand Slam bomb, weighing 22,000 lbs, or ten tons.

But Ludford Magna’s Lancasters were different. They carried a crew of eight, as opposed to the normal seven, the extra man being a specialist radio operator who spoke fluent German. He was never questioned as to the nature of his role in the aircraft, even by the Captain, and he did not feature in official photographs, particularly those taken for propaganda purposes. In many cases he was encouraged to change his identity before he joined the Squadron, especially if he had a Jewish-sounding name – my friend George was such a man.

AIRBORNE CIGAR
‘Airborne Cigar’ (or ABC) was devised by The British Telecommunications Research Establishment at Malvern in response to an urgent need to reduce considerably the loss of Allied bombers to German fighters who were being guided on to our aircraft by their ground controllers. To operate ABC, a German-speaking specialist operator was required who would sit at a desk in a curtained-off area on the port side of the aircraft. In order that he was not distracted, he was cut off from the rest of the crew, and his intercom was disconnected, except for a red ‘call light’ which would be operated by the Captain in the event of an emergency.

Except for the light from a cathode-ray screen, he worked in complete darkness, with his closest human contact being the boots of the mid-upper gunner a few feet above his head. He wore a bulky electrically-heated suit, fleece-lined boots and gloves (over Europe in winter, temperatures could fall to minus 50C at 20,000 feet), even though the gloves made it difficult to operate switches, and the bulky clothing became a dangerous hindrance if an emergency rushed exit was called for. In these extreme temperatures, it was often necessary to chip frozen pieces of condensation from the operator’s oxygen mask during the flight, and if he touched metal without gloves, he risked losing the skin off his fingers.

The specialist operator’s task was to identify German VHF frequencies and speech channels, and then jam them. In the case of a speech channel, he would either cause a constantly varying loud note to run up and down it or, in German, put out conflicting instructions to those the fighters were receiving from their controllers. If the enemy changed channels, he would have to recognise it immediately, and be expert enough to do likewise. It was a difficult task requiring considerable skill.

Lancasters fitted with ABC were specially adapted to carry extra heavy equipment which consisted of an additional receiver, three 50-watt transmitters and a cathode ray screen. The only external signs that would distinguish 101 Squadron’s aircraft from those of other squadrons were two seven-foot aerials on top of the fuselage, another below the bomb-aimer’s window, and a shorter receiver aerial on top of the fuselage at the rear.

Night after night, 101 Squadron’s aircraft were required to join the main bomber force being deployed from other squadrons. They would rendezvous with the main stream at a pre-arranged height, before filtering in with them at carefully spaced intervals. All the time, the specialist operators would be tuning in to the German frequencies.