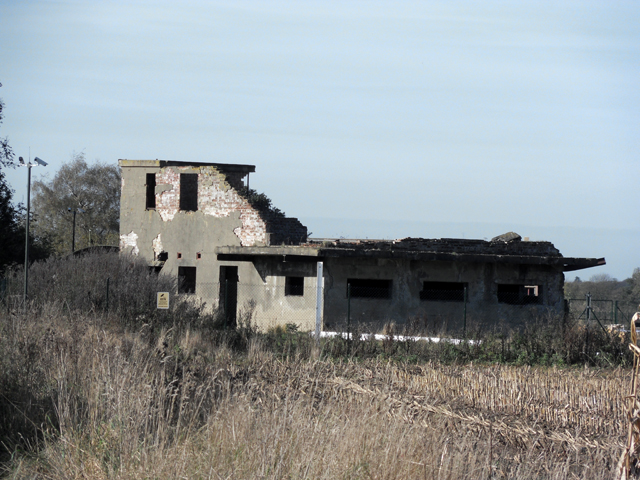 It was two years after the beginning of the Second World War that the area later to be designated as RAF Metheringham first came under the scrutiny of the Air Ministry.
The initial surveys were carried out in the August of 1941 around Martin Moor and it was soon established that the site was suitable for conversion into an airfield. One year later, the preparatory work had been carried out and by the summer of 1943 the runway’s layout, perimeters and many of the hardstandings were in place. The newly created airfield for use by No 5 Group, RAF Bomber Command was situated between the villages of Metheringham and Martin.

Over 650 acres of agricultural land had been requisitioned by the Air Ministry causing the local farmers to move out of the area. After the end of the war, however, the land did revert back to the original owners. One of these farmers moved temporarily to lands near to Waddington and his son, Peter Scoley readily recounts what an experience it was at the time.

“Moving from one newly created bomber base to another which was already in operation was unforgettable,” he said. “Living in a house close to the end of the runway, we could hear the deafening roar of the Lancasters going overhead at an alarmingly low height having just taken off, or just coming in to land.”

On 20th October 1943, RAF Metheringham, classed as a typical Class ‘A’ wartime dispersed site aerodrome opened on a ‘care and maintenance’ basis as a satellite for RAF Coningsby nearby. It was originally intended to take in two squadrons but it only ever had one, this being No 106. With the airfield still far from complete, advance parties from 106 Squadron began to move in with the delivery of the squadron’s Lancasters from RAF Syerston in Nottinghamshire on 11th November 1943. The new squadron had barely a week to settle in before RAF Metheringham’s war began in earnest. The first operational sorties were flown from here on 18th November with the advent of the Battle of Berlin.

Morale apparently was not very high at Metheringham. The buildings were stark, being intended merely as temporary structures and typically constructed with a scheduled ten year service life. Reports from the time speak of it being ‘a terrible place, cold bleak and isolated’. Accommodation was described as being as bad as could be found anywhere in the RAF. Running with condensation and draughty, it was invariably a couple of miles’ walk to their quarters for many. The Station Commander Group Captain McKechnie did sympathise with the many complainants and he did his best to raise spirits by allowing his staff to decorate their quarters and to facilitate gardens around some of the communal areas, too, resulting in many trees being planted. By all accounts he was greatly respected for his understanding and encouragement. A much-loved leader, he was sadly killed in action later in the war.

Fog was a continual problem on many airfields and Metheringham was one of only four in Lincolnshire to be equipped with FIDO – Fog Identification Dispersal Operation – which allowed aircraft to land safely in fog. The equipment was installed in January 1944 and consisted of a system of open pipelines along each side of the runway through which 1,500 gallons of petrol per minute were pumped at a pressure of 75lbs per square inch. This was then ignited and the resulting heat generated dispersed the fog. The system was very costly, needing a huge amount of fuel to work. The fuel was supplied by means of a pipeline from railway sidings at Blankney to storage tanks on the airfield. Whilst in theory the idea was good, it did necessitate the need for a different technique in landing the aircraft. The heat generated did tend to keep the aircraft airborne, thus pilots had to ‘fly’ the aircraft onto the runway rather than just cutting the power and dropping down onto it. The operation of FIDO was not without incident. On one occasion, a Lancaster from No 83 Squadron crashed on landing in foggy conditions, killing all crew members except the rear gunner who, although badly injured, did survive and has visited the airfield since.

Less than two years after the arrival of No 106 Squadron the war was over and the end of the war in Europe brought about the need for a transition for RAF Metheringham to the role of a training station. This was proposed in order for the setting up of a ‘Far East Tiger Force’ which was to incorporate the planned removal of No 106 Squadron to the Far East to take part in the war with Japan. The idea was never to be implemented, however, as VJ day dawned on 15th August 1945. The FIDO facility was also terminated in December of the same year. In March 1946, RAF Metheringham was put on a care and maintenance basis with part of the station being put to use as accommodation for displaced persons.

During the time that the squadron was operational it was effective in the bombing of numerous targets including Berlin, coastal gun batteries at Pierre du Mont and V1 storage sites. The squadron was disbanded in February 1946 having flown over 200 operations and suffering the loss of fifty-nine Lancaster bombers. No 106 had won a total of 267 decorations including a VC awarded to Sgt Cyril Jackson for his part in a raid on Schweinfurt in 1944, one of only eight VCs awarded during the Second World War. The last raid for the squadron took place on the night of 25th – 26th April 1945 when fourteen Lancasters from Metheringham joined with other units from No 5 Group in the bombing of Vallo Oil Refinery in Norway. This was to be the final operation of Lincolnshire based Lancasters.

It was early in 1947 that the airfield was eventually returned to agricultural use. Between 1950 and 1955 the Communal Site 4 was in use as a hostel for agricultural workers of many nationalities, who had come to work on the site, and the three hangars which were being used by them were dismantled and sold off in 1958. It was finally decided by the Air Ministry, after the clearance and deactivation of the Bomb Storage area in 1956, that they no longer had any use for the entire airfield along with its buildings.

Today the control tower, whilst still recognisable in its ghostly form as it stands as a silent sentinel overlooking the runways, has bowed its head to the elements and is now without its upper reaches. Similarly, many of the station’s other buildings, once so frenetic and buzzing with action have now either been taken over by small firms or have succumbed to the elements of the unforgiving British climate.

In July 1992, a memorial to No 106 Squadron was unveiled. To coincide with the 50th Anniversary celebrations, a Garden of Remembrance was formally opened along with a Service of Commemoration held in the former RAF church building adjacent to the Visitor Centre.

When I visited Peter Scoley, he told me of how his wife Zena had been the first lady to chair the Lincolnshire County Council and whilst in office there she raised the issue that there were still many ex-RAF buildings existing on their land. It was around the period of the late 1980s and early 1990s and the North Kesteven District Council became involved and they soon expressed their wish to further promote the county’s aviation history by building on the already established nickname of ‘Bomber County’.

In 1994 an educational charity was established known as The Friends of Metheringham Airfield. Peter and Zena Scoley became the founders of this organisation and this certainly reflects their passionate interest in the history and developments of the family’s land. The Council proposed that an ‘Airfield Heritage Trail’ be set up and that many wartime airfields including RAF Metheringham be used as education modules for schoolchildren and students alike.

Since its inception in 1993, the Friends of Metheringham Airfield has made some quite remarkable achievements. This group of dedicated enthusiasts, complete with its own elected committee, has joined forces to actively maintain and staff the Visitor Centre and to organise open days and run a programme of aviation lectures. By means of voluntary work, fundraising and subscription, the Visitor Centre – which was formerly the Ration Store – has been transformed into a most interesting museum depicting what life was like on this once very busy operational RAF station. A superb model of the original airfield is on show here, along with a richly documented history of all things to do with No 106 Squadron.

Adjacent to the Visitor Centre, a newly restored block is in regular use for members’ meetings, lectures and reunions. At one time the gymnasium and church for the RAF station, this building also houses a 1/4 scale model of a Lancaster (once it was a flying model!), and a very thought provoking display of fifty-nine model Lancasters, all bearing the relevant individual markings of those that were lost in action by No 106 Squadron.

At its peak, RAF Metheringham was home to over 2,500 servicemen and women, support staff and ancillary workers. They all contributed to the war effort and have earned their place in history. With the preservation of this site ongoing, it has now become an excellent educational resource in addition to being a popular tourist attraction. As well as the display of many artefacts from the wartime home of No 106 Squadron, the Friends of Metheringham Airfield has actively preserved the memory of all those who served here and who gave their lives during the war. It is very fitting that memorials have been installed on this former RAF station. It is equally gratifying that they attract the attendance of local schoolchildren at the November Remembrance Service, alongside those more senior members of our society.