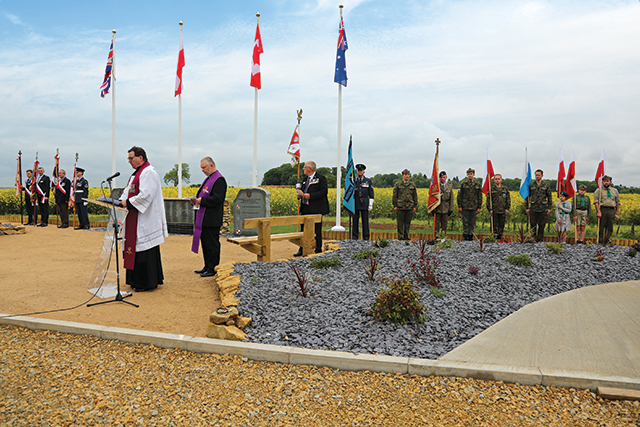 Recognising the heritage of RAF Ingham

Penny Wainwright looks into the history of the World War Two airfield outside the village of Ingham, between Lincoln and Gainsborough.
It opened in 1942 as an additional airfield for RAF Hemswell but with the arrival of two Polish Squadrons it became an RAF Station. It had three grass runways with accommodation at the north of the airfield.

The airfield ceased to be operational in December 1946 when the land was used for agriculture once more. I met Geoff Burton at the home of the Polish Bomber Squadrons and RAF Ingham Heritage Centre. He talked about the development of the Heritage Centre and their aims as we walked around the site. Geoff had moved to Fillingham in 2003 and become interested in the history of the village. After seven years of research he put on a display with 200 people turning up to see it. Following a meeting with twenty interested people, RAF Ingham Heritage Group was formed in November 2010. The Rose family (of W & A C Rose (Farms) Ltd) live in Fillingham Castle and own all the airfield land. Discussions took place with them and by 2012 they had kindly agreed to give a twenty-five-year lease with a peppercorn rent for part of the airfield and access to it.

Both Geoff Burton and Brendan Pritchard of the Heritage Group are passionate about creating and developing the Heritage Centre. There are currently twenty-three volunteers, with many having stayed since 2010, also including Polish volunteers who have become interested and helped. In order to apply for Heritage Lottery funding, they have not been able to do any work on the Airmen’s Mess. However with funding from Lincolnshire County Council, East Lindsey District Council and the Polish Veteran Organisations they have managed to raise around £180,000 in the last seven years with volunteers creating pathways and hedging around the site.
2018 saw many celebrations and events across the country marking 100 years of the Royal Air Force. Poland became an independent country on 11th November 1918. This was followed by the creation of the Polish Air Force on 1st December 1918, thus 2018 marked a double centenary for Poland. During World War Two, Polish airmen escaped Poland, then France before arriving in Britain. An agreement was reached giving the Polish Air Force independent status under RAF command. There were fighter, bomber and coastal command squadrons. At RAF Northolt, home of the Polish fighter squadrons during the war, a small museum and exhibition opened in 2007 but the four Bomber Command squadrons have had no place to mark their history and achievements.

The Heritage group aimed to apply for Heritage Lottery Funding to renovate the existing Airmen’s mess buildings and create new spaces inside. In the meantime they have had to work on other parts of the site, including the blast trench, food preparation building and a Nissen hut. RAF Scampton provided volunteers from 1ACC in January 2015 to dig out the blast trench at the back of the site and the guard room which is near the entrance. As utilities no longer existed, funding from the Armed Forces Covenant Grant was used to provide a modern sewage system during April 2015. The ground above it has been grassed and will have picnic tables for visitors in the future. Further funding from the grant has provided a Nissen hut to hold several old vehicles, which will be restored and included in displays at the Centre.

The food preparation building had broken down walls, no roof and a tree growing up through the middle of it. Work began on it in 2015, with walls rebuilt and Crittall windows installed. This will become the Volunteers’ Workshop. There are several portacabins on site, including a simple exhibition room for visitors and a crew hut. For the last two years non-commissioned aircrew trainees from RAF Cranwell have undertaken Community Project work at the site. In 2017 twenty trainees arrived, which increased to thirty this year. They have painted walls, fences and cleared spaces.

In 2016 the volunteers decided on a Memorial Garden Project in recognition of 300 Mazowiecka Squadron, 301 Pomorska Squadron, 304 Slaska Squadron and 305 Wielkopolska Squadrons. Funding towards the project was received from the Polish Embassy and Consulate, so plans were drawn up in January and by May the work was completed. There are two memorial stones, and a central stone listing the names of 166 lost airmen. A metal sculpture of five Wellington aircrew stands at the edge of the garden. The memorial garden was opened by His Excellency the Polish Ambassador, Witold Sobków, the Polish Consulate General and John Lockwood, the Deputy Lord Lieutenant of Lincolnshire on 26th May 2016.

After the war the Polish aircrew wanted to return home, but many who did were arrested and executed as spies. In 1947 the British government brought in the Polish Resettlement Act, allowing them to settle in Britain and the Commonwealth. Near to Ingham Village one of the RAF accommodation sites became the Cammeringham Resettlement Unit for the Polish families. Before this was demolished the Heritage group took photographs and measurements of it, in addition to collecting parts to re-use. There are still relatives of the Polish families living in the area who remember what living in a Nissen hut was like and what was inside them. A replica Nissen hut has been built using the original ribs and measurements from the building. It has a vegetable garden at the side and there will eventually be a door connecting it to the new Heritage Centre. There is a main living area and two bedrooms with double-glazed windows. Originally the huts would have been cold and damp with condensation running down the curved metal walls. Work began on the hut in early 2015, with the outside painted by October 2017 and the vegetable garden planted in 2018.

The next stage for the Heritage group has been to apply for Heritage Lottery Funding to create the Heritage Centre that has been central to the group’s aims since 2010. The current renovation plans for the buildings include a reception and shop area, a small media suite and a café, in addition to a large exhibition space. Currently the large space is home to house martins and swallows with the roof open in spaces to the weather. If funding is approved, it is hoped contractors may be able to start work in March to allow the Centre to finally open in August 2019. Future plans include re-building the third wing for an education block with a research centre and access to the oral histories of the Polish veterans. Geoff Burton is keen to get the Centre completed so the veterans can see the Polish Bomber Command Heritage Centre in their lifetime.

As I left at the end of my visit, the sight of the five Wellington aircrew looking out as if waiting for the return of missing airmen reminded me of the words on the Polish Standard ‘God, Honour and Freedom’. This is what they gave their lives for and when the Heritage Centre finally opens we can honour their bravery and their beliefs.