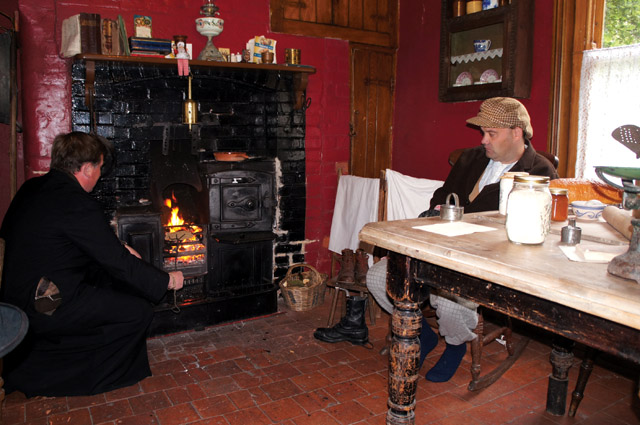 Local authority budget constraints have taken quite a toll around the county and one of the early casualties was the Church Farm Museum in Skegness. Caroline Bingham went along to The Village, Church Farm as the trust, which now operates the centre, launched their second summer season.
Without its subsidy of £96,000 the museum faced closure in October 2010. A campaign began, involving members of the Friends of Church Farm Museum, local businesses and the tourism community, to look into the prospects for the museum being run by an independent trust and local volunteers. Over thirty people attended that first meeting of the Church Farm Museum Group reflecting the deeply held feeling that, while Skegness has many contemporary entertainments, the town should not lose its only heritage attraction and valuable community resource.

Working to a very tight deadline, between November 2010 and April 2011, negotiations were held with Lincolnshire County Council (LCC) to allow volunteers to run the museum. Permissions were finalised on 15th April as the first event organised in 2011 was about to be held.

I was shown around by Trevor Monahan, duty manager and one of the eight board directors of The Village, Church Farm Ltd.

“Over 15,000 visitors came through the gates last year and now with the opportunity to plan our first complete year of events, numbers are looking good for 2012,” he explained.

During the few months that LCC mothballed the site, one member of staff was retained to protect the site. That responsibility now rests with the trust who hope that in a couple of years ownership of the buildings and artefacts will also be passed to them from LCC. Trevor carried on to say: “The museum now runs with the help of volunteers. Some are members of the main or management boards while others do all the cleaning and maintenance as well as act as guides, craftsmen and members of the household in Victorian costume when school parties and tourists come to visit.”

The heart of the museum is the Georgian farmhouse which was part of the Earl of Yarborough’s estates and farmed by the Tagg family until the early 1960s. You approach the museum through a housing estate, not too far from the centre of Skegness and it is only when you stand in what was the farmyard that you realise that half a decade ago on the other side of the fence was open farmland.

Built in 1766, the main part of Church Farm House is the second oldest building in the town (the oldest is the Vine Hotel) and later additions included a new kitchen and a wash house. The house fell into disuse until 1974 when the last remaining three acres and the farm buildings were sold to the district council. LCC were at the same time looking for a place to house the Bernard Best of Bratoft collection of farm implements and machinery. The offer was accepted for them to be kept at Church Farm Museum which, following renovation of the house and its adjoining buildings, opened in 1976 as a living museum; decorated, furnished and equipped as a Lincolnshire farm of the Victorian era.

I took a walk through the farmhouse’s garden and orchard, home to a pretty summerhouse. This composite building is made from two of the eight kiosks that were placed in the Skegness Pleasure Gardens and at the cricket club, in the late nineteenth century, as part of the transformation of the town into a seaside resort.

The farm’s buildings form a small village with a green at the centre. To one side are the old stables, now housing workshops for a blacksmith, wheelwright and wood turner. Trevor gives demonstrations to visiting school groups and tourists in the forge, making miniature horseshoes while Andrew Harris from Anderby Creek operates the woodturner’s lathe. In the barns, there are tractors and a Hornsby traction engine which are fired up for visitors throughout the year.

A wonderful example of a Lincolnshire thatched, mud and stud cottage was moved to the site in the early 1980s. Withern Cottage was originally built at Withern, near Alford and is simply furnished to reflect the life of a farm labourer in the early part of the eighteenth century.

Other barns are used as a shop and café and the old dairy is an educational space used by school groups who come to experience aspects of Victorian life as part of their National Curriculum history course.

There are exciting plans ahead for The Village, Church Farm to further expand its use as a venue for community events and make the shop and café more user friendly with improved toilet and educational facilities.

A final cup of tea was waiting for me in kitchen, carefully prepared by ‘Rose’ (Maria Hansford) and the man of the house (Stephen Briggs). Served in Rose’s best china tea cups, I had a chance to warm myself in front of the old range. “We are very grateful for the support we have received from local businesses and the people of Skegness. We are still looking for volunteers with traditional skills especially in building and crafts,” said Trevor, “and we shall soon have a sponsors’ wall where people can buy a brick and make a donation towards the maintenance of the site.”

You can also show your support by paying a visit this summer to this unique Lincolnshire attraction, which conjures a life more tranquil and slower in pace than that of the modern seafront.
You can find more information about opening hours, events and volunteering at: www.churchfarmvillage.org.uk