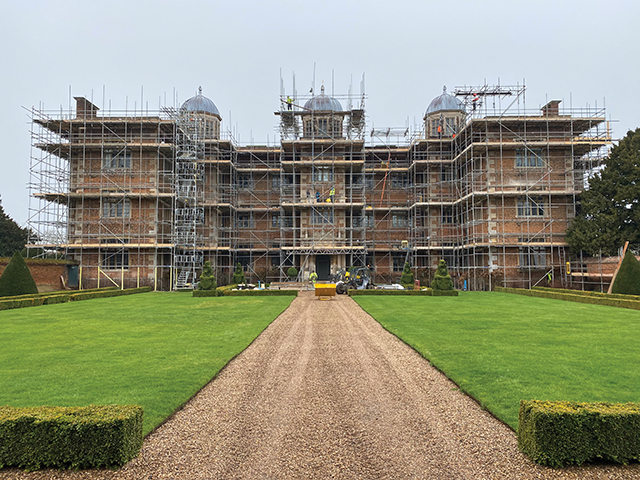 Repairing the roof while the sun shines

I met Claire and James Birch, owners of Doddington Hall, in their private entrance hall and put on the obligatory hi-vis jacket and hard hat. I was counting my blessings that this opportunity had coincided with one of the best spring days of the year – brilliant sunshine, little wind and some warmth in the air. James was guiding me and explained that major repairs need to be carried out approximately every 150 years to maintain the integrity of the 420-year-old, Grade 1 listed building. The pandemic resulted in an opportunity which Claire and James needed to grasp to invest in fundamental repair work as part of their own legacy for the estate.

Once in a lifetime opportunity
“Last summer, the Government launched a fund to support culture and heritage damaged by the pandemic,” said James. “A small part was designated for repair work on 60 privately owned historic houses and monuments. The Heritage Stimulus Fund covered repairs to Elizabethan brickwork and stonework on the house and garden walls and prompted a once in a lifetime opportunity for us to make our own further investment in the future longevity of the house and gardens.”

The grant was also designed to provide jobs to skilled craftspeople, whose work might otherwise have been interrupted by Covid-19 restrictions. In the case of Doddington Hall this meant finding stonemasons and a lead worker with the skills and experience of working on heritage renovation projects. Architectural and Heritage Scanning carried out a digital survey of the building to assess the extent of the work required. (You can view the virtual 3D model if you scan the QR code at the end of this feature.)

Lapis Design, who worked closely with the main contractor GN Construction, project managed the restoration of the stonework and lead work and engaged Kate Holmes, an experienced stonemason from Northamptonshire. Martin Ebb, a very experienced locally based stonemason, also brought his expert knowledge of fixing stones to the project; skills he has also used working on Lincoln Cathedral. Lastly, Ray Waterfield, a master lead and roof metal worker who lives in Norwich but works all over the country on heritage renovation projects was recruited. “Their services are in high demand so we were lucky to secure their expertise for this project,” added James.

Areas of concern
As we climbed the scaffolding metal stairway to the left of the front elevation of the house James told me that since the house was completed in 1600 further renovations were completed and some windows were enlarged in the 1760s, adding Georgian elegance to the building.

The last major repairs to the chimneys and roof were carried out in the mid Victorian period so there were several major areas of concern including a stubborn to repair leak in the roof which was impacting internally, brittle stonework and unstable brickwork. As we reached the first floor it was easier to see where new stonework has been inserted into the string courses which deflect rainwater from the windows and brickwork and are the horizontal banding which defines the three floors of the building externally. Kate has worked from templates she drew from the old stonework to make sure the shape and fit matched as closely as possible those of the original masonry using Ancaster Hard White and Ancaster Weatherbed limestone.

In places, work was being fulfilled in the nick of time; a particularly unstable ledge was overhanging part of the main entrance steps and on the roof a low wall, not visible from the ground, had Elizabethan bricks and mortar which had become so brittle, it was taken down and rebuilt with a backing of more contemporary masonry.

Renovating the chimneys and cupolas
Once we reached the top of the stairway we could walk the full circuit of the roof. I had to pause to take in the wonderful 360-degree views; to the east the city and Lincoln Cathedral on top of the ridge and to the west all the way across north Nottinghamshire and the outline of hills on the horizon. We also had a birds-eye view of the gardens, lawns and walls laid out below us. From this perspective you could clearly see where the top five courses of the garden walls have been rebuilt and pointed; work which took three months to complete by a team of four bricklayers.

The roof is laid with copper and I could clearly see the verdigris of the Victorian restoration work and the contrast of the new repair. The source of the leak has been identified and will hopefully resist the south-easterly gales for the next 150 years.

The symmetry of the roofline of Doddington Hall features three large cupolas which sit on top of octagonal lantern rooms and a series of triple chimneys. The scale of these features is impressive from the ground but at close quarters their size can be truly appreciated. All but one of the triple stacks were rebuilt as part of the 18th-century repairs and now the Elizabethan brick and stonework of the last one was showing excessive erosion and cracking to the underpinning structure. This will be rebuilt using modern heritage bricks using similar craftsmanship to the original builders. James explained that part of the challenge is that building regulations and the understanding of the fabric of heritage buildings has progressed so much since the Victorian renovations. Some of these need to be unbuttoned to bring the building up to present day specifications and climate change could be having its own impact on a building which was created for weather conditions prevailing 400 years ago.

Access to the platform on which Ray was working on the leadwork covering the cupolas was definitely more of a challenge for me; a steel ladder tied vertically to the scaffolding and a sideways step onto the platform but so worth the effort.

Ray has a soft Norfolk accent and he worked a 12-hour day, 7 days a week for three months on the renovation and leadwork. James joked that he will miss the tapping of Ray’s metal former up on the roof waking him up each morning once the work is finished. Ray has the deep understanding of the organic nature of heritage building materials, from the characteristics of lead sheeting to stretch in situ, to the damage caused by the use of green oak to form the pinnacles on top of each cupola. The tannin in the green oak had reacted as an acid with the lead, corroding and rupturing the previous metal work.

“The layering of the new leadwork in each cupola segment is in two shorter drops rather than the one drop used in the Victorian period. Each segment is also narrower and held more securely with additional nails, so less weight in each drop will mitigate any lengthening and failure of the leadwork,” said Ray.

Any welding was also completed at least an hour before Ray knocked off each day so that he could check that any residual heat in the lead was not fanned into a flame by the breeze. More than two-and-a-half tons of new lead has been laid on each dome, covering a new layer of copper beneath.

I left Ray contemplating moving scaffolding to work on the last of the three cupolas and climbed down the ladder – definitely taking more of my nerve than climbing up it. I had chance to admire the views once more over the gardens before we descended the rest of the metal stairs.

Preparing to reopen
What a wonderful privilege this had been for me to see this unique perspective on Doddington Hall. For Claire and James they have taken the opportunity to secure the building for several more generations.

The scaffolding, which has been in place for six months, is being dismantled as the Hall is now open for the 2021 season. One of the last jobs before this is done is the cleaning of all the windows to remove the dust and grime of the building work; a job that is the responsibility of Matthew Bowser of MB Complete Clean. Weddings and many more events will hopefully be underway from 22nd June and Doddington Hall will be a picture perfect backdrop once more.