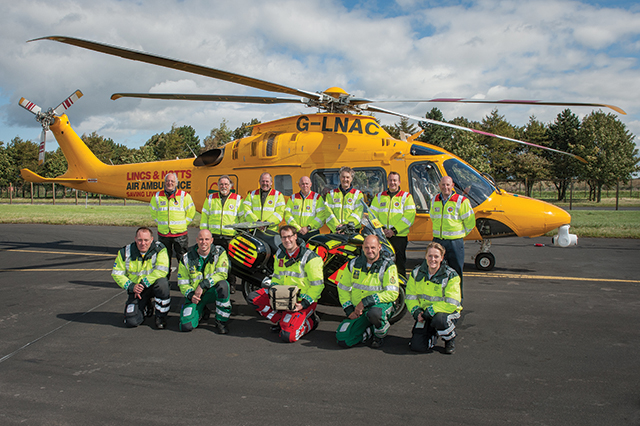 Riders with ‘Blood on Board’

Caroline Bingham talks to Paul Bagwell, chairman of LEBBS, the Lincolnshire Emergency Blood Bikes Service.
Our television screens give us tense and moving insights into the work of airborne emergency services in programmes such as Air Ambulance ER, An Hour To Save Your Life and Helicopter Heroes but there are unsung voluntary groups around the country who support this vital work.

Paul explained that a voluntary committee was formed locally following a talk at Lincoln Fire Station at the beginning of 2012 from a representative of the Nationwide Association of Blood Bikes.

“This umbrella organisation looks after a total of thirty county based groups around the UK, the longest established dating back to the early 1960s, but until this point there was no such group in Lincolnshire. From here, the initial hurdle was to raise sufficient funds to register with the Charities Commission, with local groups such as Round Table and Rotary Clubs being very supportive and they continue to be so,” said Paul.

“From here we were able to recruit and train volunteer riders, purchase vehicles for the charity and in April 2013 LEBBS launched its service in support of the county based NHS Trusts.”

The provide an out-of-hours courier service transporting essential medical items such as blood, pathology and microbiology specimens, medical notes, pharmaceutical products and donor breast milk between hospitals and healthcare facilities. This service is offered completely free of charge between 7pm and 7am daily, as well as all day at weekends and Bank Holidays.

Paul said: “We currently have eighty members (twelve controllers and sixty-eight riders) covering an area as far as Goole, Scunthorpe and Grimsby Hospitals in the north of Lincolnshire, down to Lincoln, Boston and Grantham in the South. The National Blood Centre for this region is in Sheffield, so we regularly do runs there and we have also taken samples as far as Leeds where there is access to more specialist equipment or resources. All of these runs assist in the clinical care of NHS patients in Lincolnshire and are of an urgent nature. We also liaise with other Blood Bikes groups to relay the transit of supplies across, primarily, the north of the UK.”

LEBBS is run on an entirely voluntary basis, with the aim of saving lives, saving the NHS money but also to promote a positive image of motorcyclists. The charity currently owns eight bikes and four cars which are all maintained, serviced and equipped to be fit for purpose to transport their cargo in tamper proof, secure condition.

Since September 2017 LEBBS has been delivering ‘Blood on Board’ to the Lincs and Notts Air Ambulance (LNAACT) based at RAF Waddington as part of the expansion of their service to include emergency transfusions.

“The blood is kept in a specialised cool box that maintains the temperature and allows it to be stored for forty-eight hours,” explained Paul. “We collect a freshly packaged box from Lincoln County Hospital and deliver it to the Air Ambulance each day. We then collect any unused blood and return it back to the hospital so it can be returned to stock, ensuring there is no wastage of this vital resource. The Henry Surtees Foundation has sponsored the equipment to enable this blood to be administered at the scene of an accident. The Foundation was set up by John Surtees following the death of his 18-year-old son, Henry, racing in Formula 2 at Brands Hatch in 2009.”

LEBBS is also one of a small number of blood bike groups in the UK to transport donor breast milk within its area.

“There are huge benefits for premature babies to receive natural milk as opposed to formula milk,” said Paul. “To give these babies the best chance of survival, LEBBS collects donated breast milk from new mums in our area and with the help of Shropshire and Staffs Blood Bikes relay it over to the processing centre at the North West Human Milk Bank in Chester. Once processed it is distributed to the Women’s and Children’s Hospital at Hull Royal Infirmary. We are then called upon to collect from Hull and deliver to neonatal units across Lincolnshire when there are infants in need.”

Although the group has grown its membership and resources each year, it is are always looking for new members and fundraising is an ongoing essential requirement.

“You don’t have to be a motorcyclist to become involved. We have plenty of work for administrators, fundraisers and support staff. It costs £12,000 a year to keep our vehicles on the road and provide this essential service. We are always grateful when companies nominate us as their charity of the year, or people organise events from which we will receive the proceeds. We regularly organise collection days at supermarkets and receive bequests and donations. Above all, people can be assured that every penny we raise goes towards the service.”

In 2017 LEBBS volunteers covered 21,745 miles on more than 700 runs and those numbers will increase this year. You will have a chance to meet members of the group at various county shows this year including Lincolnshire Show and Heckington Show but if you would like to talk to someone about joining the group or supporting their activities contact LEBBS at www.lebbs.org