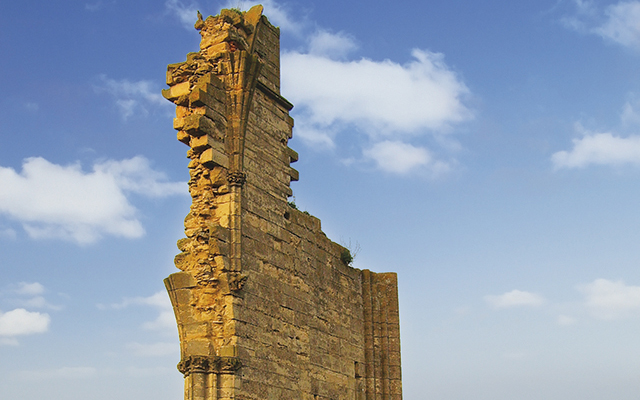 Chris Franks visits the remains of Barlings Abbey, once prosperous but whose ruin was a result of the Lincolnshire Rising.
There is one thing that immediately strikes anyone who visits north Lincolnshire. It’s not the RAF bases, or even the illustrious cathedral towers. It’s the fens – the miles of featureless ground that stretch away over the horizon. Lincolnshire is famous for them. And although these plains may seem uninteresting, they contain many treasures. One of these lies seven miles north of Lincoln – a mysterious place, with a rollercoaster history of spiritual enlightenment and savage violence. Yet to look at it, you’d think that no-one had visited for years. And maybe no-one would have set foot there for many more years to come – had I not been so curious.

I paced gingerly through the rough meadow as the resident longhorn cattle looked on. It was a mild autumn evening and I’d travelled across the county to the tiny hamlet of Low Barlings. I’d been researching Lincolnshire’s old monuments and an obscure ancient site had captured my imagination. A faded sign at the end of a deserted, single track lane had indicated the way and as I picked through the scrub, I became more and more intrigued. What was this place? What happened to it? I passed under some trees and emerged onto a vast open plain. And suddenly there it was – the last surviving tower of Barlings Abbey.

At first, it seemed at odds with its surroundings – this grand ecclesiastical conception in amongst miles of empty fenland. But soon things started to make sense. The stones were glowing with a warm, soothing yellow in the evening light and I could hear the serene waters of the Barlings Eau trickling nearby. It was so tranquil, so peaceful – a perfect place for a monastery.

How strange those first settlers must have looked as they sized up the land in their long white habits – the local peasants must have thought they were ghosts. Actually, they were Premonstratensian canons and thirteen of them arrived here in 1154 to build an abbey. Known as the ‘white canons’, they originated from Prémontré in France and were founded in 1121 by Saint Norbert. They had already established their first English abbey at Newsham in 1143 and had travelled down from there.

But they hadn’t come to live a hermitic existence and unlike other orders, the Premonstratensians also served in their local communities. The brothers of Barlings turned out to be shrewd business people and although little evidence now survives, it’s known that they established a successful wool trade. Barlings enjoyed royal favour in the fourteenth century when an exemption from wool tax facilitated an extensive rebuild, completed by 1360. The end result was an impressive building – about 300 feet long with a tower some 180 feet high. The abbey received numerous gifts of land and by the end of the fourteenth century, it was one of the richest Premonstratensian houses in England, owning large estates throughout the county.

This prosperity continued for the next 130 years. The abbey’s affairs were regularly inspected and although the brothers were warned about modern fashions and chastised for wearing slippers, Barlings was generally well run. By 1535, the Abbot was a very wealthy man – one of his expense accounts details the purchase of three rings set with precious stones, a horse and a ‘tun of claret’ for the colossal sum of £25. One can just imagine him, sitting in his chambers looking out across the fenland on a warm summer evening. As he surveyed the successful abbey around him and the new rings on his hand, life must have seemed very good indeed. But it wasn’t to last.

I glanced up at the sky. The light was starting to fade and the first shadows were appearing. Suddenly an icy breeze came from nowhere and I huddled into my jacket. The cattle became agitated and started running across the field. A flock of birds erupted into a mass of thrashing wings and scrambled for the skies. I looked around – was someone else here? Then I saw a face staring down at me from the tower. It was a gargoyle – a long haired man, wide mouthed and hand to his face in shock. I wondered what he could have witnessed to invoke such alarm. After all, this was a place of tranquillity and prayer. Surely there had never been any trouble here?

Not so. In 1536, an ill wind swept through Barlings. Henry VIII had recently severed ties with the Catholic Church and announced the Dissolution of the Monasteries. England’s Catholics were profoundly unhappy and one in particular, Thomas Kendall, vicar of Louth, decided to act. After Evensong on 1st October, he started a backlash that culminated in 40,000 men seizing Lincoln Cathedral and demanding an end to the closures. This revolt, later known as the Lincolnshire Rising, was short lived, though – the King called their bluff and soon, the rebels had scattered and numerous arrests had been made, among them Matthew Mackarel, Abbot of Barlings, and four of his canons. Kendall’s subsequent execution did little to dampen resentment, however, and a more widespread revolt, known as the Pilgrimage of Grace, began. This time it was led by a London barrister called Robert Aske who, with 9,000 followers behind him, took control of York. The King took this threat more seriously and toward the end of 1536, he negotiated via his leaders with Aske at Doncaster, the latter’s following now having grown to nearly 40,000 men. An agreement was reached and trusting the King’s word, Aske dismissed his force. By early 1537, though, the King’s promises had not been honoured and a third uprising started, led by Sir Francis Bigod of Yorkshire.

The King’s response was brutal. Bigod, Aske and many others were arrested and convicted of treason. A bloodbath of executions followed and among the victims were Matthew Mackarel and his canons. In total, 216 noblemen and clergymen were killed. And with the opposition silenced, the dissolutions continued with a vengeance. The King’s men arrived at Barlings in 1537, claiming the land for the Crown. They scattered the brothers to the fields, raided the valuables and stripped the lead from the roofs. In one blow, a community that had prospered for nearly 400 years was shattered. And Barlings Abbey was reduced to a lifeless shell.

In 1539, the land passed to the King’s brother-in-law Charles Brandon, the suppressor of the original Lincolnshire Rising. By 1620, Sir Christopher Wray owned the site and he built a mansion there, although within 100 years this had completely disappeared. Over the centuries, numerous visitors bore witness to the abbey’s gradual decline. In 1697, Abraham de la Pryme saw the abbey “still standing, tho in rubbish.” By the time Samuel Buck was sketching in 1726, however, most of the building had collapsed and only the tower remained. This finally succumbed in 1757 and by the end of the century, the ruins were being cannibalised by local builders – as John Byng noted in 1791, observing that “they are daily carting away the stones.” The abbey’s fall from grace reached a low point in the nineteenth century when an attempt was made to demolish the last remaining fragment with ropes and horses. It proved too strong, however, and this is the fragment that stands to this day. It’s now a scheduled monument, protected by law.

I watched an owl glide silently overhead on its nightly patrol. The sun had set and the tower’s broken sides were silhouetted against the sky. Calm had returned, the cattle were gathered peacefully in a corner of the field and the birds were sleeping once more. I checked my watch – I’d have to leave soon.

Taking a last look at the tower, I reflected on my visit. Maybe the spirits of Mackarel and the brothers had briefly returned on that icy breeze, still not at rest after their untimely end. But after so long, their anguished cries had faded – their home was now ruled by other masters. The blocks were cracking, the walls were sprouting weeds and the foundations were being eaten away by the grass. These forces the tower would not withstand. So, having sadly realised its fate, I left Barlings Abbey, like the bow of a sinking ship, to descend back into the fens – alone, silent, forgotten.

On the way home I took a wrong turn and found myself driving through the centre of Lincoln. The streets were heaving with fun seekers and the bars and clubs were competing for their attention with their garish decor. There was a fair in town and crowds were queuing for the rides, whose illuminated metal arms spun through the sky.

So much energy and life, I thought. But how suddenly the fortunes of a place may turn – on the whims of a king one moment, or a council planning official the next. Maybe tomorrow these lights will go out. And the people will vanish, the walls will be left to the elements and centuries from now, all that will remain is a broken fragment in a field.

And maybe one day the Lincolnshire fens will claim another treasure, its secrets lost forever. Until someone gets curious.