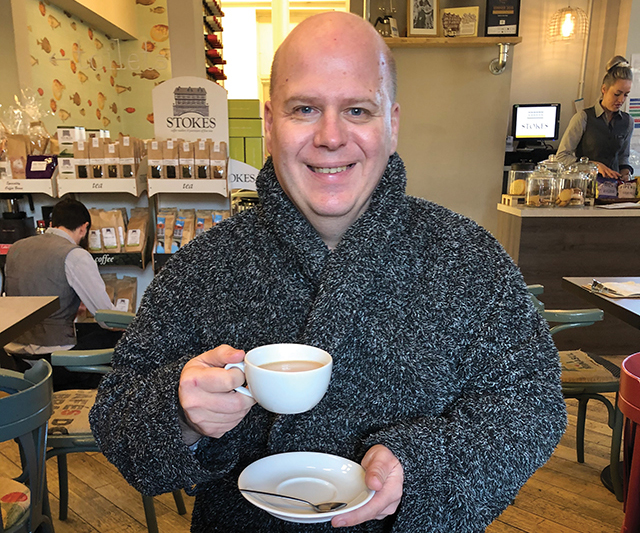 As an experienced radio presenter and respected professional who knows his patch and audience well, Sean Dunderdale is not only passionate about his craft, but having landed the most prestigious slot on BBC Radio Lincolnshire as anchor of the Breakfast show, it comes as no surprise that he’s over the moon to have been offered the job of his dreams.

The job offer came out of the blue over coffee with Charlie Partridge, managing editor of BBC Radio Lincolnshire, and it took Sean “less than 30 seconds” to say “yes”.

“It’s taken me 30 years since I was told to ‘go get some radio experience’ to finally get back here, fulfilling my teenage dream of presenting my own BBC radio show,” says the popular broadcaster who was a valued member of the team at Lincs FM for more than 25 years, rising through the ranks to become director of programming, and presenting both the farming programme and Saturday afternoon radio slots.

In March, Sean took over from Scott Dalton, who presented the Breakfast show for seven years and who has now moved on to a senior role in the BBC Radio Lincolnshire newsroom.

The menu of the all-new Breakfast show includes fun quizzes to join in with at home where Lincolnshire’s primary school children get to pit their wits against Sean and the team. He’ll also be dropping in on the county’s farmers who share his early alarm call.

“It’s a really exciting time to be joining BBC Radio Lincolnshire as it approaches its 40th birthday,” says Sean. “To be trusted with the Breakfast show and broadcast to the audience Scott has built over the years is a real honour.”

Sean’s new job will see his alarm clock go off at 3.30am every weekday, allowing him just enough time to eat a bowl of porridge for breakfast (“listeners don’t want to hear my stomach rumbling”) and have a quick look through the morning papers before joining his team at BBC’s HQ in Lincoln for the programme’s 6am start.

“I’m a morning person and enjoy getting up early,” he says cheerfully. “I’ve always managed on not much sleep. If I wake up during the night, I get up, have a cup of tea, usually tweet something that makes little sense [he loves social media], and then go back to sleep.”

Sean was just 12 years old when he made his debut on BBC Radio Humberside taking part in a quiz at Scunthorpe’s annual Family Weekend. He confesses he “fell in love” with radio following the production team around on their Saturday roadshows and helping out behind the scenes.

At the age of 15, he joined Scunthorpe Hospital Radio (where he still volunteers, alongside helping the Hospital Broadcasting Association) and by 19 was editor of Scunthorpe Star newspaper (at the time he was Britain’s youngest ever newspaper editor) before joining Lincs FM a couple of years later.

Sean says he has never been tempted by the bright lights and career opportunities offered by moving out of Lincolnshire, preferring to remain close to his roots.

“People have asked me why I’m not ambitious and why I haven’t moved out of the county, but why would I want to move anywhere else?” he asks. “Sometimes I just take time out from my day to stop and sit on a bench appreciating the surroundings – the city, the Cathedral, the Castle and the big skies – and think how lucky I have been.”

Luck certainly played its part eight years ago when Sean suddenly collapsed at home one Sunday afternoon and was taken via ambulance to Lincoln Hospital, where a junior doctor in A&E swiftly diagnosed a blood clot.

“For a few days before I’d been feeling breathless and had pain in my legs, but I didn’t really take much notice,” he says. “I climbed the stairs to the bedroom and found myself struggling to breathe, so I opened the window and then blacked out. Luckily LIVES were called and arrived in just minutes – I owe them my life.”

Sean remained in hospital for two months as the medical team investigated possible causes, but thanks to regular check-ups and medication, he bounced back to full health, and is feeling “full of energy” and planning his first holiday abroad (to Majorca) since his health scare.

“When I recovered and went back to work, I decided that the best thing to do was just to say ‘yes’ to everything that came along and I’m glad I did!”

Today, days off see him enjoying spending time with his partner Dan Hopkinson-Dunderdale, a nail technician who he married five years ago, and their much loved six-year-old Cavapoo, Mitzee, who has her own Twitter account.

The couple live on the outskirts of Lincoln and enjoy long walks with Mitzee in the city’s parks or driving to the beach, singing along to Sean’s current favourite tunes from The Greatest Showman CD.

It’s an idyllic lifestyle and a long way from Sean’s childhood growing up as an only child in Scunthorpe. The son of a steelworker “who liked a drink”, Sean was born as one of a twin (his brother died at birth) and he still recalls that this overwhelming sadness overshadowed his parents’ everyday life, leaving the young Sean a shy and anxious boy.

As a child, he idolised his grandparents who helped bring him up. His grandfather, “the sweetest man I’d ever met”, was German and ended up in Lincolnshire as a prisoner of war, working on the land. Here he met Sean’s grandmother and in spite of opposition from some of the locals, they fell in love and settled down to make a new life together.

Sean admits that in spite of his “cheeky chappie” persona, the shy boy inside sometimes still makes an appearance, especially when faced with crowds of new people, but give him a microphone and it’s a different story!
“I love getting out and about and chatting to all sorts of people who get involved in our show,” he says. “A lot of people might call me quirky, but I haven’t been told to change my style or personality for the show, which is great, so listeners will know what they’re getting.”

Sean, who likes to dress smartly for work in ironed trousers and collared shirt (“just in case the Prime Minister walks through the door”), says that keeping listeners entertained and engaged in the mornings is a balance: “Radio is all about evoking memories. People want to start their day with a smile and spring in their step, while also being kept informed and updated on important local news, weather and travel from a trusted source.

“I also think we all feel younger now; when my Nan was 60, she was making jam tarts and wearing an apron, but today people have busy lives and I hope our interactive programme reflects this by engaging with real people on the show.

“Local radio works well in our county because wherever you’re going, you’ve probably got a long journey; in the mornings I’m sitting with you in the car and we can sing along together.”

Sean says he feels lucky to be surrounded by a great team on the show. “They’ve all made me feel very welcome and part of the family, which I appreciate because I had big shoes to fill.

“Presenting the Breakfast show is a varied role and every day is different,” he says with a smile. “Some days I leave the studio and say to myself, well, I didn’t think we’d be talking about that subject today!”