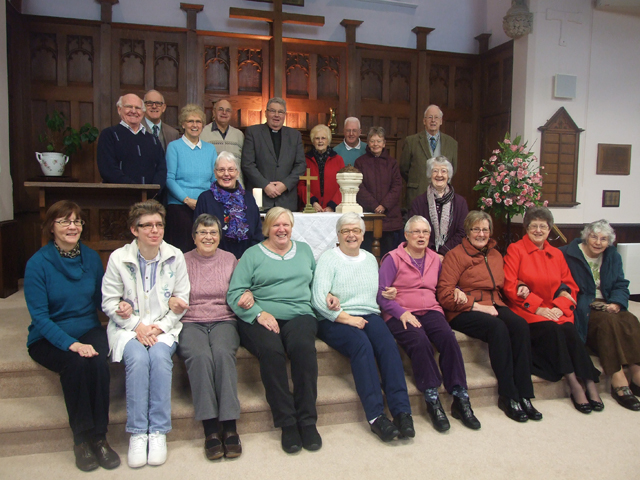 Risen from the ashes

It was a message which abruptly interrupted Reverend Cecil Mundy’s holiday on Holy Island. Relaxing in his hotel room on the afternoon of 15th June 2012, the text told him that one of the churches on his East Lincolnshire Circuit was on fire; the Methodist church at Sutton on Sea had been struck by lightning during a violent thunderstorm and the roof was ablaze.
It was afternoon and local people had watched the storm approaching from across the fields and heard the thunderbolt hit the church’s lightning conductor. The charge jumped across, dislodging a large piece of stone from the gable and sparked a fire in the roof timbers. Crews from Lincolnshire Fire and Rescue were quickly on the scene using a turntable to access the fire in the roof void by dislodging tiles from the roof.

Because of the internal lower false roof construction within the church, the fire was trapped and contained to the upper roof and trusses, but smoke and water damage extended across most of the interior.

By coincidence an assessor from Methodist Insurance heard about the fire on local news and was able to come the following day to survey the damage, estimating the repair costs to be £300,000.

Local Louth builders Rodden and Cooper were appointed as main contractors. Steve Rodden and Andy Cooper approached the restoration with both innovative and traditional methods to achieve a result entirely sympathetic to the original building.

“Firstly, a weatherproof scaffold was erected to cover the whole building,” said Andy. “The second phase saw the top arch section of the roof reinstated using Douglas fir trusses to match the original. To save the ceiling below, a twenty-first-century system was used to abut the new timber with the old; of fibreglass rods and resin infilled in a central channel, which is invisible from the exterior. Reclaimed Welsh slate was then put back on the roof.”

The third phase was the reinstatement of the interior. Old and new wood tells the story of another chapter in the life of the church, just as the retention of an interior door, which shows a tide mark from the 1953 floods, will continue to preserve that chapter. A team of other local craftsmen and specialists will be amongst those invited to the official opening later this month.

The church has been the local hub for many community activities as well as the forty plus congregation who were displaced to Trusthorpe while the church was out of use.

“The fire has given us a renewed sense of unity,” explained Rev Mundy, “and has galvanised us when we realise what we came so close to losing.”

The church was built in 1910 in a typical Wesleyan style. There are beautiful Arts and Crafts motifs carved on lecterns and in architectural detail. Fortunately the magnificent William Morris stained glass window above the altar was not damaged at all and just required cleaning.

The insurance company has been most helpful in restyling certain aspects of the interior to make the space flexible for community use. The pews have been removed and replaced with chairs, while the newly installed projection and sound systems will greatly broaden the type of events which can be held in the church.

Looking at the interior of the restored church it is hard to believe the transformation which has taken place, but careful examination reveals the joining of new wood and old and hanging from a wall on the exterior of the church is a cross made by congregation member, Tom Steveson. Its timbers are burnt and scarred roof trusses rescued from the embers, which will be a lasting reminder of the churches rise from the ashes.