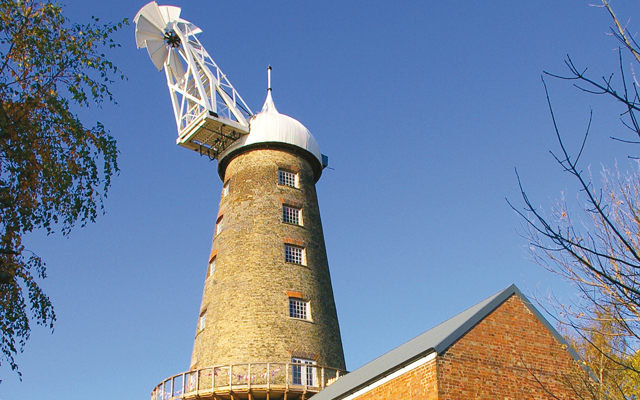 The restoration of Moulton Mill has been nothing short of a labour of love for the volunteers who set out with the dream of returning it to full working wind power eleven years ago.
The group is now busy creating its own little piece of history as it presses on with the third stage of its mammoth restoration project, which involves painstakingly making the 208 shutters needed for its new set of sails – all by hand.

The new additions are due to be installed later this year and the move will herald another major milestone for the Friends of Moulton Mill, as it will be the first time in living memory that the mill will have had sails.

Alan Lambert, chairman of the Friends, is delighted with the work completed to date and is counting down to the completion of the shutters in June, with the new sails due to be installed in September.

He said: “Getting the sails up is what everyone is looking for; after all a windmill isn’t a windmill without sails; and there is no living memory of Moulton Mill with sails.

“It’s been a real community effort; we’ve had people coming in every Wednesday afternoon to help make the shutters. The millwright showed us how to do the first one and then we’ve been passing the knowledge on to each other. It really is history in the making.

“Our visitors are local but also come from all over the world, and so many have said that once the sails are up they are going to come back.

“Once they’re up, that’s by no means the end of the story – there’s still an awful lot of work to be done inside. The millstones need checking and we need to make sure they are capable of grinding. They each weigh about a tonne and a quarter, so it’s not just a case of picking them up and having a look!

“The sack hoists have also got to be fitted, so there’s lots more to do before we can start milling our own flour.”

Once the Grade I listed building has been fully restored and the sails are turning, Moulton Mill will be the country’s tallest working windmill. A small set of millstones is currently powered by electricity for occasional demonstrations, while the main ones have not turned in eighty years. Once wind power takes over the Friends plan to produce their own Moulton flour, something which has not been done at the site for several generations.

Moulton Windmill, which proudly stands at the heart of the village, near the green and All Saints Church, was built for Robert King in 1822. Constructed to the highest of standards the mill towers thirty metres (100ft) above ground level and contains nine floors of massive timber construction and a basement.

It was one of several mills in the area that was damaged by a violent storm in 1894. Its sails were destroyed and were never replaced so the mill was powered by steam, and subsequently an oil engine.

It was kept in constant use, mainly producing animal feed, until 1995 when the third generation of millers from the Biggadike family, John, retired.

The restoration story began in 1998, when the Friends of Moulton Mill was formed by a group of around a dozen villagers, who decided the building was worthy of renovation and that it should be brought back into use – under wind power. The Moulton Windmill Project, a registered charity, was set up at the same time to help facilitiate this.

The Friends acquired the mill on a 200-year lease from local firm Broadgate Builders, which had bought the site and some adjacent land to develop. The restoration of the mill formed a condition of that scheme. The mill was then one of the first buildings selected to feature on the BBC ‘Restoration’ programme in 2003, which aimed to bring great buildings to wider public notice. A series of public votes were held to pick an overall winner, but sadly the mill did not win its category. Nevertheless, the volunteers were undeterred and set about raising funds for the first phase of their project to repair the mill’s overall structure, reinstate the white ogee cap, which can be seen for miles around, and to convert the granary into a tea room.

After this initial phase, which cost just under £1m, the mill opened to the public in April 2005, and during its season it regularly attracts between eight and ten thousand visitors annually.

Phase two, costing in the region of £82,000, involved the re-installation of the reefing gallery, which runs around the outside of the mill. It had previously been removed following the loss of the sails, as once they had gone it was no longer needed.

Mr Lambert estimates that, by the time it is complete, the current restoration phase to replace the sails will have cost just under £100,000, although by making the shutters themselves the volunteers have saved £27,000.

Moulton Mill recieves no financial support from any organisation. Its upkeep alone costs £7,000 a year, before any restoration work is taken into account. All the staff and managers are volunteers who give up their time to run the tea rooms, raise funds and give guided tours, all of which play an important role in securing the future of the mill.

Mr Lambert said grant money from English Heritage, WREN, the European Regional Development Fund and other sources has made the restoration of this wonderful building possible along with the Friends’ fundraising efforts, other charitable donations and sponsorship.

He added: “It demonstrates the particular community spirit in Moulton. Nobody is paid, everybody volunteers and we couldn’t have done this without any of them. Everybody contributes something different, most people give what they can in time and effort and it wouldn’t be possible without that.

“Moulton Mill is a magnificent, impressive building – you can see that by the wonderful remarks our visitors leave. It’s a part of our heritage and as far as we know it’s the only mill actually owned and operated by the community rather than a private organisation. We’re thrilled to have moved into the village and become part of this wonderful project.”

* Moulton Mill is open to visitors Thursday – Sunday from 10am to 4pm. For more information visit www.moultonwindmill.co.uk