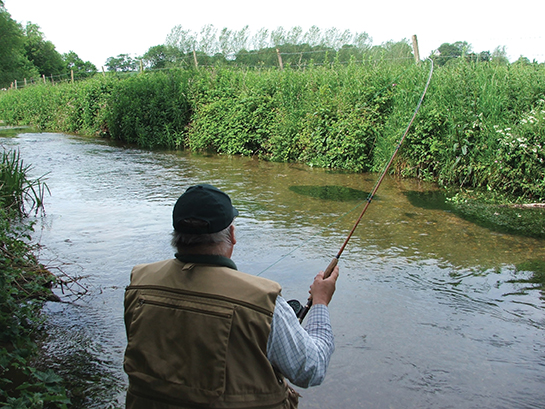 Some stillwater fisheries have remained open during the winter months but 1st April sees the start of fishing for wild brown trout, Salmo trutta. Barry Grantham explains how to make the perfect catch in the county.

There is a fair abundance of wild brown trout in Lincolnshire. We have the Great Eau, River Bain, River Welland, River Slea and the Upper Witham. There is also a good head of becks and streams in the county that produce brown trout. Most of the brown trout fishing is controlled by clubs, syndicates and is on privately owned land so please check before visiting.

A brown trout, or ‘brownie’, is easily recognised. The back of the fish is an olive brown colour with dark brown or dark red spots. The trout’s sides have red spots. The spots are also on the dorsal fin; this is the large fin on the fish’s back, but very rarely on the tail fin. The belly of the brown trout is of a butter-like colour. The fins are usually black but can be orange to red. A red adipose fin, the small fin between the dorsal fin and tail, is the hallmark of a brown trout.

During April around 85% of the brown trout’s food is below the surface of the river. The trout’s main objective is to thrive and grow and it will want to do this with as little effort as possible. It will feed on stonefly and sedge larvae, nymphs, snails, and freshwater shrimp.

My favourite fly to use in April is a freshwater shrimp imitation. This is an easy fly to make and a good pattern for anyone wanting to start fly tying. I first prepare the hook by lashing flat lead strips on top of the hook shank to form a hump. Three strips should be enough, each one shorter than the previous one. I then strengthen the binding by covering in varnish. The lead on the hook shank as well as forming a hump makes the imitation fish point up, thus helping to avoid snags on the stream bottom as it bounces along in the current.

This shrimp pattern is teamed up with a rod of 7ft that takes a 3 or 4 weight line made from split bamboo or on the very small streams a Scottie 1 weight made from carbon fibre. This is the lightest fly rod size available. A 2lb breaking strain leader is attached to the fly line.

The best time to fish for these wild fish is very early in the morning. Once the sun gets up, they very often stop feeding until late afternoon and dusk which is one of the best times to fish for wild trout.

Look for places where the stream forms a pool with overgrown banks. The fish will not be out in open water but in the shady cover. These sorts of pools in April are ideal for fishing a nymph or shrimp pattern.

The imitation shrimp is cast upstream and allowed to come back towards you with the flow of the river. Keeping in contact with the fly as it gets near the angler, a simple roll cast puts the leaded shrimp back upstream. It is important that you keep in contact with your imitation and do not allow the line to go slack. Do not strike, just lift the rod and tighten your line as the fish takes the shrimp.

Until the water starts to warm up, this is an excellent method to catch a wild brown trout from a small Lincolnshire stream.

If you wish to know more about fishing on small streams please get in touch by email. I am a licenced game angling instructor and can provide guided trips fishing for wild trout in Lincolnshire with all tackle provided.