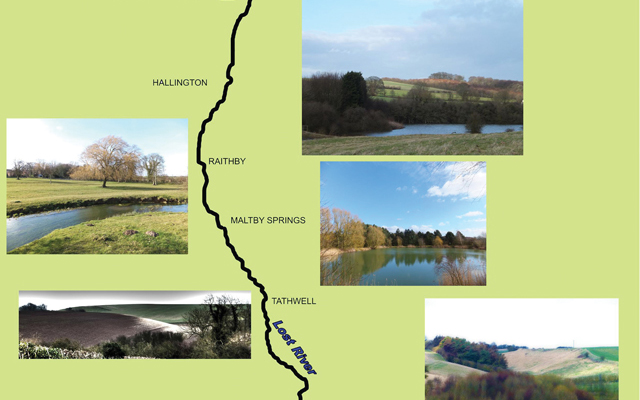 Salt of the earth

Uncovering and preserving a piece of Lincolnshire heritage lost in time.
When out for a walk in the Lincolnshire countryside you never know what fascinating piece of the county’s ancient heritage you might turn up.

Recently, a friend mentioned he had seen some wooden structures at North Cotes and Grainthorpe Haven, which looked very similar to medieval fish traps he knew of in Essex. We went to photograph his discovery and sent the photos off to Lincolnshire’s Historic Environment Record department, where the experts studied them, classified them as possible medieval fish traps and added them to the record.

The ancient past of our now quiet, rural expanses took on a new light in my eyes. I imagined medieval fishermen paddling coracles among the traps to collect their catches. I began reading up on the archaeology and history of the region, particularly the Romano-British and medieval eras in relation to fishing and salt making.

Amongst all my research I turned up one extraordinary anomaly which, after several months of archaeological fieldwalking and geological and historical research, has provided much evidence for a fascinating piece of Lincolnshire’s history that has been lost in time: the Domesday Book records a salt house at Welle (Maidenwell) – an anomaly because Maidenwell is not on the coast but high in the Wolds. Historians have tried to solve this puzzle by suggesting the Domesday Book must mean Maidenwell had a salt house holding on the coast (although that is not actually what it says). However I began finding evidence that the saltworks was, indeed, at Maidenwell.

Satellite maps and a walk round the ‘saltworks’ field reveal earthworks that look exactly like evaporation pools and there are several springs in the area. I discovered that a former inhabitant of maidenwell Manor used to tell the story of how the salt was transported by water, in coracles, to Louth! The farmers who told me this were scratching their heads over it, as they couldn’t find an obvious waterway to help prove the story.

The civil parish of Maidenwell is littered with evidence of human settlement from at least Neolithic times and it seems likely that it could have been salt springs that attracted man to this particular area. Archaeological finds, including some of my own which landowners kindly allowed me to pick up for the purpose of dating, indicate that the settlements in the Maidenwell CP from Romano-British to medieval times were quite large and even prosperous – if Romano-British window glass is anything to go by. Clearly something important and lucrative was going on here.

The source of the salt could be the geology laid down by the Zechstein Sea in the Permian era 250 million years ago. Known to include salt domes, the outer limits of this sea stretched as far as Maidenwell, deep under what is now the Wolds. I figured the last Ice Age could have been instrumental in creating the conditions that would bring the salt to the surface. The glaciers stretched into the Maidenwell area and their subsequent meltwaters and the gradual shedding of glacial deposits could have created the aquifer to provide a hydraulic connection, dissolving the deep salt deposits and bringing them to the surface in briny flowing artesian wells.

Known for their expertise in organisation, I thought it likely that it would have been the Romans who got the salt works going as a lucrative commercial industry, complete with waterway transport networks.

I believe I have cracked the mystery and found the ‘Lost River’ from Maidenwell to Louth: at the very doorstep of the saltworks field is a dry tributary valley (probably once fed by some of the Maidenwell springs) that leads to Skirbeck (a small brook). This brook looks to have been diverted towards the A16, from flowing into what is now a large, dry river valley between Maidenwell and Haugham. This impressive dry river valley, which once contained the ‘Lost River’, wends its way along to Tathwell with springs and wet sections here and there.

From Tathwell it still contains a river proper which passes through Maltby and Raithby to Hallington where it joins the River Lud and onwards into Louth. It is interesting to note that ‘Hal’ is Celtic for salt and ‘ling’ is fish. Could this be where a fish salting industry was set up using the salt shipped by coracle from Maidenwell?

It is possible that the Romans also utilised the River Great Eau to transport Maidenwell salt eastwards, since its source (according to a local landowner and which seems obvious from satellite maps) is very near the saltworks, at Farforth – though the source is usually placed near Calceby.

As the Maidenwell salt house is recorded in the Domesday Book, the industry was certainly still active in 1086. But when did it end and why? It is possible the supply was cut off hundreds of years ago by a variation in the level of the water table; or perhaps the earthquake of 1185, which destroyed part of Lincoln Cathedral, caused a shift in the geology which might have cut off the supply.

Does a Domesday Book fact, a local legend and much physical evidence all tie up to reveal a fascinating piece of Lincolnshire heritage that has been lost for hundreds of years? I hope this article will provoke discussion and further research.

Having walked the lonely footpaths and followed the Lost River Valley dozens of times in recent months, I have never once come across another human soul. I have found the same in other woldland and marshland areas. No people, but numerous archaeological Roman and medieval potsherds. Our county has an exceedingly rich heritage to be discovered.

The East Lindsey region of Lincolnshire has always been relatively isolated from the rest of the country but that does not mean that little or nothing of much note has taken place here over the centuries. We only have to look at The Ptolemy map, based on his book Geographia, written circa AD150, which places Salinae (meaning salt works) in the Ingoldmells region, which is likely to have been at the centre of vast saltern areas radiating in all directions – even perhaps into the former lagoon area, eastwards, which is now sea proper. It is the only Salinae that Ptolemy placed in our country and therefore implies it was the major Romano-British salt-producing area – surely a piece of our local heritage of which we should be proud and perhaps make more of.

Our countryside is diverse, beautiful and forgotten and that is what many of us love about it. Others might say it is full of rolling emptiness. But you only have to scratch the surface to find a wealth of historic fascination to equal, and perhaps surpass, any of the less secret parts of the country.