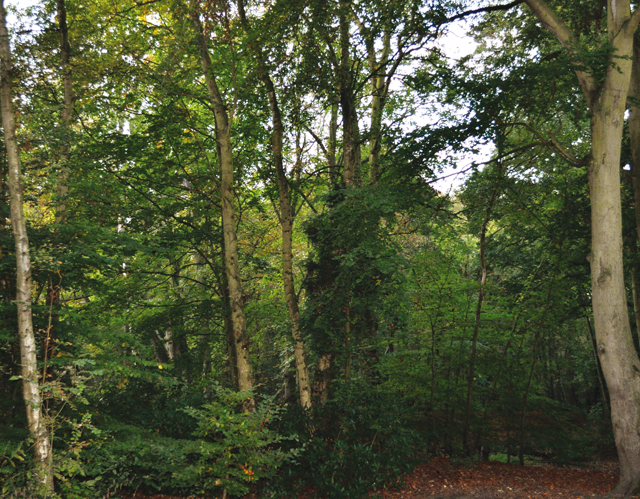 Saving the woodland which could save us

Folklore, food and shelter of the common man could be found among the birch and oak of thirteenth-century British woodland.

Survival relied on this woodland and the land was treated with such importance that, in 1271, King Henry III issued the Charter of the Forest which granted common man ownership of the nation’s woodland and remained official law until 1971. Today, people of Britain still have free access to much of the nation’s woodland. But 800 years after the charter’s issue do we still need this land to survive? Or is the woodland in fact saving us?

A recent exhibition at Lincoln’s Usher Gallery explored this evolving relationship between man and the woodland and celebrated the Charter of the Forest, which is currently displayed at Lincoln Castle. Maggie Warren, from the Usher Gallery, said the exhibition highlighted the document’s importance, and explored the changing role of the nation’s woodland in our past, present and future.

“Humans cannot exist without forests, the theme is universal.”

Paul Hetherington, from the UK Woodland Trust, also reiterated that 800 years after the Charter of the Forest was issued the woodland is now helping to save man with the woodland’s trees being essential to life.

“They have myriad benefits for both wildlife and people. They stabilise the soil, generate oxygen, store carbon, play host to a spectacular variety of wildlife, provide us with raw materials and shelter, and inspire our imaginations and creativity. Planted in the right place trees can alleviate flooding, reduce noise pollution, reduce wind chill and reduce heat levels, especially in our built-up environment. A world without trees and woods would be barren and bare,” he said.

One man who knows first-hand the healing properties of woodland is Shropshire tree hunter Rob McBride, who discovered their serenity six years ago after suffering a physical and mental burnout following a build-up of modern-day stress and pressure.

“I had suffered massive anxiety, panic attacks and depression and my doctor told me getting outside would really help. So I wandered through the woodland. I remember spending one whole day in a forest and I could actually feel my pulse and blood pressure go down while I was there,” he said.

“I think we need woodland more than ever these days. Society is getting richer in a materialistic way, but that’s not everything. These places are invaluable and worth a fortune to the nation because being in woodland just makes you feel so good.”

Rob McBride is not alone in his experience of woodland having a positive impact on his mental health. Recent research carried out by the Woodland Trust’s VisitWoods project, in partnership with Caring Homes and Dementia Adventure, has highlighted a clear link between people with dementia visiting woodland and an improvement in their physical, mental and social wellbeing.

The woodland is also saving the nation’s imagination by preserving folklore and stories according to artist Natalie Gale. Ms Gale’s exhibit, ‘Purpresture’, featured in the Charter of the Forest exhibition, explored the magical and mystical quality of the nation’s woods. The walk-in installation encouraged viewers to shift from truth to fiction among an array of flora and fauna applicable to the Charter, a short poetic story, oil paintings that used medieval colours, red blue and gold, a cabinet of curiosities, as well as a short film of a mouse gnawing away at a bound book (an image used to replicate what is believed to have happened to the Magna Carta).

“Folklore and storytelling is often featured around or within forests; from the dark ghostly wood to an enchanted forest. For me, to lose our folklore would be a devastating loss. Bit by bit rituals are fading so to take an opportunity to remind us of interesting phrases, tales, characters – real, mythical or fictional – is a gift. I particularly enjoyed my research of Lincolnshire folklore and how I could appropriate it within my artistic practice,” she said.

“Folklore has more of an importance to our everyday lives than we realise; many of us still salute the magpie, but why? Back then the magpie was associated with the devil, so to pay your respects and to acknowledge the bird was to ward off evil. How then, may I ask, would we see the birds to say our rhymes and give our salutes to if our woodlands are sold? It’s simple, we wouldn’t. And how long would the memories of these rituals then last?”

Despite the emotional, imaginative and environmental healing qualities of woodland, how long these memories and the UK’s woodland lasts is largely dependent on the nation’s planning policy according to Woodland Trust UK representative, Paul Hetherington.

“All planning processes and policies are being ‘streamlined’ into one overarching document, called the National Planning Policy Framework (NPPF). This will become the planning system in England,” he said.

“The government’s review of the planning policy in England appears to place profit over the environment with a damaging loophole in woodland protection guidance threatening ancient woods and ancient trees. This loophole has brought about the loss of ancient woodland in almost fifty per cent of our threat cases in the last decade and enables the destruction of ancient woods and trees.”

“Woodland covers around twelve per cent of the UK, making it one of the least wooded places in Europe. So it is vital that we nurture what remains and look to plant new woods for the future, especially in a county like Lincolnshire which is among the least wooded.”

It seems that, just like many relationships between flora and fauna, the relationship between woodlands and mankind has evolved to become somewhat co-dependent. Who would have predicted that in 1217, when King Henry III issued the Charter of the Forest and granted common man ownership of land for survival, that during the next 800 years, this relationship would become symbiotic? Who would have guessed that just as UK woodland now relies on mankind to ensure its preservation in the face of development, they are also saving mankind from emotional, physical and global problems?

PLANTING HOPE
The Forestry Commission recently announced more than £1 million worth of grants dedicated to increasing woodland cover in Lincolnshire.

The grants are designed to support high quality planting schemes which fulfil key priorities such as broadening wildlife habitats, creating places for people to enjoy healthy exercise and providing much needed timber.

Shire Farm in Hagworthingham, one of the UK’s largest biodynamic farms, is among the first to take advantage of this scheme and will plant 15,000 trees on their 500-acre site with the help of the Woodland Creation Grant from the Forestry Commission. The Farm will create three separate woodland areas which will consist of 8.77 hectares of wet woodland which will run along the farm’s boundary with Snipe Dales Country Park; 1.39 hectares of wet woodland in an existing wet area on the farm; and a hectare of lowland mixed broadleaf woodland.

With woodland cover in Lincolnshire being just 3.3% – well under the national average of 9% – Dave Boyle from the Forestry Commission said few dispute the region needs more woodland.

“They are good for wildlife, absorb carbon dioxide and offer owners an increasingly attractive economic return. More trees equals a more sustainable future. The time to act is now,” he said.