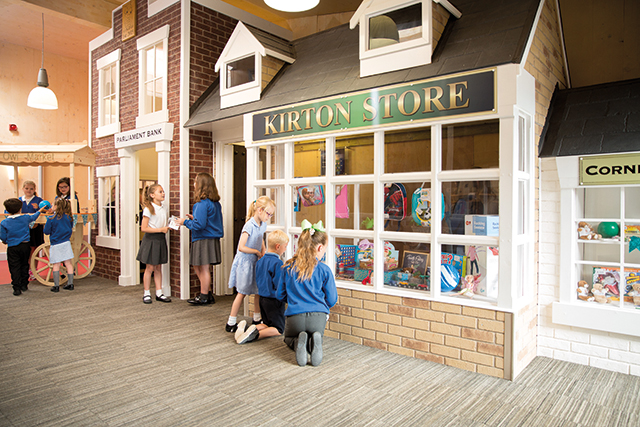 A primary school which has created its own High Street and bank to teach pupils about managing their money has seen a dramatic turnaround in its academic results. Kate Chapman spoke to the school’s executive headteacher to learn more about the initiative.
Thanks to the Learn and Earn project at Kirton Primary School, near Boston, children as young as 5 are learning how to be savvy with their savings – the school has created its own currency which pupils earn and can then spend in their shop, or if they prefer, save for a bigger reward.

Since launching the project, executive headteacher Nicky Donley said the school has seen huge improvements in pupils’ achievements and for the last four years it has been in the top two per cent of schools in England for progress in mathematics, reading and writing, and the top one per cent for disadvantaged children.

It has also received a string of accolades in recognition of its work, most recently winning the 2018 Learning and the Advice and Guidance awards from Children and Young People Now, where it was up against the London Institute of Finance among others.

Further honours have come from TES and education awards organised by local newspapers plus it has also received Centre of Excellence status too.

Mrs Donley said that although many children in the community come from disadvantaged backgrounds, the creativity and drive of the project has completely closed gaps between those youngsters who are disadvantaged and those who are not.

“We wanted our children to take ownership of and responsibility for their learning, and to generate a burning passion for education and learning that would inspire them to realise their own success,” she said.

“Since opening the High Street every child in the school has opened an account in the bank and purchased items from the shop.

“They’ve learnt how to manage their finances and to appreciate the connection between work and reward. They’ve learnt the value of earning in a community of high unemployment and low wages too.

“We’ve also received a lot of interest from the media and other schools and we’re more than happy to share what we’re doing, it’s not just for our children.

“It really has been a very exciting time for us.”

The Learn and Earn project came about as a way of enthusing children who come from a challenging area about their learning.

The school is federated with Kirton Nursery School and Boston Nursery School and currently has 550 pupils on roll, aged between 3 and 11 years old. Thirty per cent of its children have special educational needs, compared to the national average of 12 per cent, while 29 per cent are predicted to be low-attainers (compared to 11 per cent nationally). Twenty-two per cent of pupils at Kirton also have English as an additional language and many enter the school with little or no English at all.

A large proportion come from deprived backgrounds, where their parents and families aren’t working or are in debt and the school wanted to put something in place that would try and help the children break free from this cycle.

Mrs Donley, who has been head at the school for the past twelve years, said the initial idea was to set up a table where children could swap their house point tokens for different things, but she thought the idea wasn’t quite exciting enough and wouldn’t have a big enough impact.

“We didn’t want to be working with real money so we designed our own currency – the Kirt – which looks like real money and then we’ve created a High Street with a bank, a market stall and a shop, which costs about £400 a year to run,” she explained.

“The shop is stocked with things like glittery scented gel pens, not expensive items. It’s run entirely by and for our children, they hold all the positions from cashier to manager.

“They wear uniforms and badges, organise and oversee work rotas, check pay, order stock, create window displays, arrange special offers, open bank accounts, balance the books, and lock up at the close of each day’s trading. For all this they get paid in Kirts.”

The school’s shopping and banking system is designed to improve standards for pupils by rewarding their hard work and success.

All the items sold range in price from 3Kirts to 100Kirts. Getting full marks in a spelling test earns them 1Kirt, while they are also rewarded for representing their school in sports tournaments and other activities such as taking part in the choir.

“When we first started out they all rushed out to spend their money straight away, but now many have realised they can get something bigger or better if they save and some have their own detailed savings plans,” said Mrs Donley.

“We have modelled earning on real-life scenarios in the adult world. The children are even able to earn interest on their savings – which they call free money!

“At the beginning some of them were putting their money in their trays rather than the bank and then losing it. If they asked for more we had to explain they couldn’t have any – they needed to look after it and keep it safe, and now they all have bank accounts.”

Since launching the scheme the school has also teamed up with local banks who have taken an interest in the project and pupils have visited branches in town where they were able to see the safe and even sit behind the counters.

“It’s self-perpetuating – the children understand if they work hard they are rewarded and can earn money,” said Mrs Donley.

“One of our bank employees even remarked proudly, ‘I am the first person in my family to have a job.’

“We’ve had to put on extra lunchtime clubs as we had children who weren’t getting full marks in their spelling tests wanting to re-sit them straight away so they could earn their Kirt. There’s a real buzz around learning – the children want to do it.

“It’s certainly generated a lot of interest. We have been inundated with requests from schools and advisory boards across England and Wales, requesting advice.

“We’ve put information on our website, given presentations at headteachers’ briefings, responded to interview requests, given advice over the phone and through email, appeared on the news and featured in the national and local press. We’ve even put on an open day to support, encourage and enthuse our colleagues.

“All that is very exciting, but it’s not the reason for doing it.

“The children are enjoying themselves, they’re learning and very often they don’t even realise they are learning. We’re giving them skills they will be able to use for life, which is fantastic.”