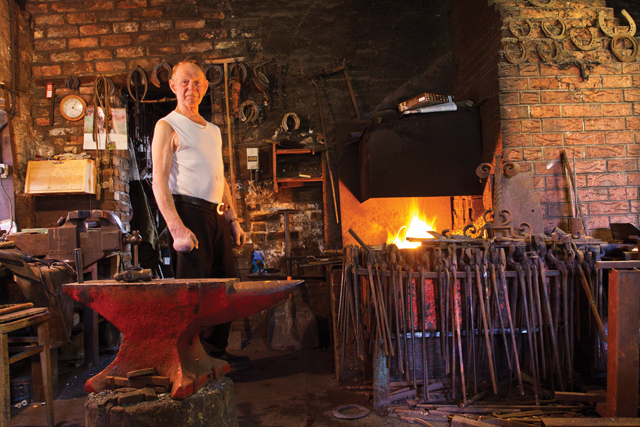 To the rest of us an anvil is an anvil is an anvil, but to Mike Chatterton, blacksmith and farrier of Scawby, different anvils have different characteristics.
What’s more, once an anvil loses its ‘ring’ it totally affects the way it works metal – it is like a soprano losing her voice. He demonstrates this by banging one fine-sounding anvil with a hammer and then by banging a dud one.

Who would have thought that something as unyielding as an anvil would be so subtle?

Scawby Forge is a neat limestone workshop and cottage on Church Street. Pincers and hammers are arranged by size, like rows of organ pipes. Mike has lived here for more than thirty years, working at the forge and as a mobile farrier.

Hammerheads turned out by Mike and his son are in demand from as far afield as America. Mike’s grandson has also excelled in smithing competitions, appearing in the media and on local television.

As he works a huge red-hot Clydesdale horseshoe with its upturned heel, Mike tells of how they were originally made for hauling heavy carts over cobbles; a good Shire horse could pull up to two tons.

He is well versed in his trade, explaining how you have to work iron in such a way that it doesn’t crack; how different steels respond; and how you have to have a grasp of the delicate anatomy of the hoof.

Even the slaking of red-hot metal, be it in spring water or in hard tap water, affects the final outcome; it is that critical. In years gone by the crème de la crème, believe it or not, was whale oil. Clearly, a blacksmith has to know about a lot of different things.

He picks up a sword, as though it is Excalibur plucked from the anvil, and explains how the blade would be gradually built up in battens and hammered repeatedly in order to boost the carbon content – even the samurai did it this way – in order to strengthen the long blade.

All this connects with what Neil Oliver, TV historian and author, writes about the Iron Age tools excavated here in the county in the 1980s, in his book ‘A History of Ancient Britain’:

‘…the iron tools of the so-called Fiskerton Hoard speak of the life of a working man, they are as evocative and as moving as any bronze sword… The contents of a toolkit, they include an iron hammerhead, fragments of an iron saw together with its elegant horn handle and iron file. I challenge anyone to hold those treasures in their hands and not feel a connection to them… the teeth on the saw are still plainly visible; the business ends of the hammerhead are battered and flattened by much use… If someone were to show you the Fiskerton tools and say they were from their grandfather’s toolbox, you would believe them… and yet they were put aside for the last time 2,500 years ago.’

And that enduring tradition lives on in the likes of Mike Chatterton, his son and his grandson; you could say that it is an anvil that has worn out many hammers.