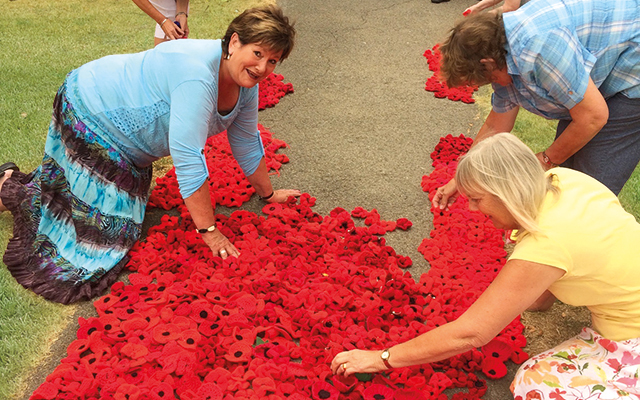 The people of Heckington are marking the Centenary of Armistice Day with a unique series of events. Caroline Bingham went to hear more about the final preparations for their Sea of Poppies commemoration.
Our stunning front cover image for this month’s issue was taken in July when the knitted and crocheted poppy count had reached over 6,000. Good weather and a small army of volunteers helped to create the ‘poppy pathway’ leading to St Andrew’s Church. Visitors to the Sea of Poppies will be able to view what became of these poppies once we had collected them all up again, as well as the 9,000 more which have been received in the meantime.

Andrew Key, lead organiser of Heckington 100, told me he is delighted how the project to make the thousands of the poppies has caught not only the imagination of the village community but also contributors from across the UK and abroad.

“Locally, volunteers have individually made from tens to hundreds but through social media and the coverage we have attracted, I have received poppies from Australia, Ireland and New Zealand. Among the envelopes we’ve opened has been one from the Corfe Quilters in Somerset and another, particularly poignant one, from a lady in America. Her message read: ‘My Grandfather was a Horsekeeper in the army. In his memory I enclose a knitted poppy which I hope you will be able to use in your display.’ We shall be remembering the loss of animal life in the war with a purple poppy installation.”

The Sea of Poppies festival begins on 27th October and will run for two weeks until Armistice Day, 11th November. Visitors to St Andrew’s Church will be able to see a collection of exhibits and installations created by community groups and volunteers from their thousands of craftwork poppies.

Andrew explained the special role the church bellringers will be playing: “At 9am on 27th October a special peal marks the launch of the Sea of Poppies. Further peals will be played on Remembrance Sunday at 9am, 12.15pm and 7.05pm on 11th November. The midday ring is part of a national peal of a thousand churches and the evening ring will be timed to follow the lighting of beacons in locations across the county and UK.”

When I returned in October to get an update from Andrew and Jan Palmer, Chairman of Heckington Parish Council, poppies were being sewn onto fabric, netting and lines to create the cascades, exhibits and installations which will decorate the inside of the church.

“St Andrew’s is one of the most exceptional fourteenth-century gothic churches in the UK and poppy exhibits will decorate the Easter Sepulchre, Lady Chapel, pulpit, high altars, choir stalls and cascade from the balcony. We are most grateful to the support from the Heritage Fund of St Andrew’s Church for the project. Community organisations are all responsible for creating their own designs and tributes.”

The Armed Forces Covenant Fund Trust has sponsored ten Perspex Tommy – ‘There But Not There’ – silhouettes, which will be seated amongst the pews to give an ethereal reminder of the fallen, including the thirty-one men from Heckington who died on the battlefields in WW1. Their sacrifice and number will be further honoured with smaller, black and white silhouettes, positioned on pews.

Andrew is particularly delighted that all local children have had the opportunity to be involved with the commemoration. “We seem to have caught the imagination of so many. Our most recent addition to the creative input has been the painting of poppy themed rocks, which will be on display in the church porch as visitors walk into Sea of Poppies.

“It has always been the ambition that the poppies work for the benefit of the Royal British Legion and there is a discussion taking place as to what we shall do with them when the festival is over. One permanent artwork which will be a lasting reminder of this unique occasion is a new door curtain for the church which will have poppies sewn onto it. Primarily though, we hope to be able to sell most of the poppies to benefit the Legion. Until it is decided exactly what we shall do, the poppies will be carefully stored.”

Jan Palmer summed up the local impact of the Sea of Poppies: “It has been absolutely fantastic to get the whole community involved and we cannot thank all the volunteers enough who have given up so much of their time. This is a unique event which we hope will be remembered by everyone who has been involved or visits.”

ADMISSION
Entry to Sea of Poppies is free of charge but donations will go towards the Royal British Legion Poppy Appeal. Refreshments will be served every day of the two-week opening, the proceeds of which will go to St Andrew’s Church.