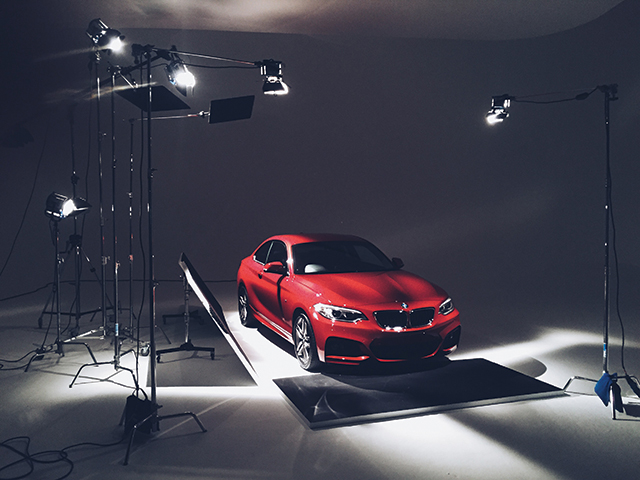 Seeing the world through a camera lens

He was just eight years old when he got his first camera, now Dom Romney’s passion and flair for automotive photography takes him all over the globe.
The twenty-five-year-old has an impressive portfolio of ad campaigns featuring big auto brands Land Rover, Jaguar and Rolls Royce, while his pictures from motorsport events including Formula One and Goodwood Racing have appeared in numerous magazines and newspapers.

And last November Dom, who grew up in Heckington and Sleaford, was named one of the top 200 photographers by the highly acclaimed Lürzer’s Archive.

Dom originally wanted to work on special effects in the film industry, but decided on a career in photography after receiving his first camera while still at primary school.

“My dad was really into cars and racing and did a lot of motorsport,” he recalls.

“I got my first camera when I was about eight; it was a little film one and I spent most of my pocket money getting it developed – to get thirty-six pictures it used to cost quite a bit!

“Most of my photos were taken around cars and holidays; I just started taking more and more, I became more interested in it and things snowballed.”

After studying media and moving images at college, Dom spent some time working in the photography department at the Lincolnshire Echo, before completing an NCTJ (National Council for the Training of Journalists) course at Sheffield and from there he moved to London.

“It was around 2007/8 – the start of the financial crisis,” he recalls. “I was supposed to be taking photos of companies for newspapers like the Financial Times to reflect their increases, but of course this wasn’t happening.

“I moved back to the Scunthorpe Telegraph and started to lose interest in press photography as I didn’t like the way the industry was going. Then I moved back in with my mum while I tried to figure out what I wanted to do.”

It was a chance request from a family friend to take some pictures of his car that inspired Dom’s next career move.

“I got into doing automotive editorial and some advertising campaigns and then I started covering F1 races. Rather than solely focus on the Grand Prix, I decided to cover a few races and also worked on advertising campaigns for Land Rover, Jaguar and other big brands. They come to me with a loose idea of what they want and then we discuss how the finished product will look, it’s quite fun.

“I enjoy the creativity and I like the variety of my work – I also do work for magazines like Top Gear, Autosport and Fast Car. I shoot anything on two or four wheels – it’s quite a niche, and can be quite difficult. You need to have creative flair, and be able to visualise – you’ve got to make the vehicle look good in the location,” he adds.

Dom’s work takes him all over the world. On average he makes forty overseas trips a year to far flung destinations including Dubai, Abu Dhabi and Bahrain as well as into Europe.

“I really do enjoy the travel,” he says. “I couldn’t imagine being stuck in an office all the time, it would drive me up the wall! I like experiencing all the different cultures too; places like Japan and China have fascinating cultures and history and I enjoy meeting the people. Just to be able to go to these places and do it through work, I’m pretty fortunate.

“My working life is very unusual – but I like it; it can go from one extreme to the other with commissions and no two weeks are ever the same.”

As Dom readily admits his job is certainly a far cry from his rural Lincolnshire roots.

“I’ve recently come back from a job in Saudi Arabia – where we got shot at,” he says.

“We were doing some shots up a canyon road. All the roads there drive out into the middle of nowhere; this guy came slowly driving down the road in a pick-up – we thought he was just coming to see what we were doing.

“He climbed out of his van, went to the back and pulled out a gun – like an AK57 – and opened fire vaguely in our direction. He fired around thirty times, and then just drove off.

“All we could do is hit the decks and hope for the best. What he was doing, who knows, it was certainly interesting.”

When it comes to tools of the trade Dom uses two cameras – a Canon IDx and a Phase One IQ280 worth around £30,000 – to achieve his stunning images.

“The motorsport stuff started off because I could never afford to go racing myself; I just figured out a way of getting involved using the talents I have,” he says.

“It’s quite a challenging discipline. It’s all about knowing where to stand to get some interesting shots.

“One of my favourite pictures was taken during the Bahrain GP. I was walking back down towards the finish line, when I turned and saw two cars getting pretty close. I managed to get the camera in the right place to catch them upside down.

“You hear that it takes years of experience to get the right shots but a lot of it is being in the right place at the right time so that it all comes together – I’m quite lucky!”

Despite his travelling all over the world, Dom still likes to get back to Lincolnshire when he can.

“My mum still lives in Heckington, so I try and get back once a month and I really enjoy going home. The skies are pretty spectacular. I think when you’ve had a little bit of time away it makes you enjoy the view more when you return,” he adds.

“As for the future, it’s completely away from what I do, but I’d love to cover the America’s Cup sailing – it’s a really powerful sport. I’d also like to shoot some jets too.”

Given his drive, passion, and talent, we’re sure Dom will get his wish.

For more information about Dom and his work visit www.domromney.com