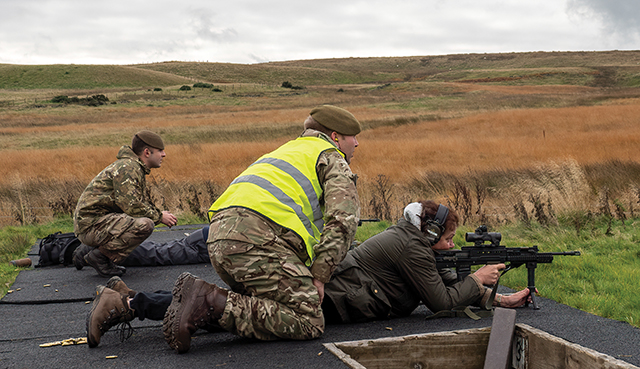 Serve in a growing force

Lincolnshire Life was invited to join Army Reservists from the county on their exercise weekend high in the North Yorkshire Moors. Caroline Bingham put on suitable footwear and clothing and signed up for the day.

WITH nearly 30,000 trained Reservists in the British Army, compared to 78,400 full-time, regular personnel, their contribution to the combined strength of our Armed Forces is considerable but no less skilled and dedicated. While they are trained, paid and given the opportunity to be involved in everything that the Regular Army does, most Reservists have a day job too.

We were meeting members of 4 (Lincolnshire) Company, 3rd Battalion, The Royal Anglian Regiment. The company recruits from Grimsby and Lincoln, the county of Lincolnshire and districts including Gainsborough and Scunthorpe in the north.

Our rendezvous was Wathgill Camp where we were welcomed by 4 Company Commander, Major Mitch Pegg, who explained that rather than reducing numbers, the Army is now recruiting more Reservists, especially Junior Officers, into the company which is based at the historic Sobraon Barracks, Burton Road, Lincoln and at Westward Ho Barracks, Grimsby.

“Our team is 4 (Lincolnshire) Company, an organisation with historic links to the Lincolnshire Regiment where so many from the county served in both World Wars and other conflicts. We remember their service with gratitude and pride and strive to live up to the standards that they aspired to and met. With so many opportunities available for both females and males, it must at least be worth finding out more about what we do. That’s exactly what every current member of the company did.”

Rain had been forecast but rather than marching onto the moors, we were given the luxury of travelling by minibus to Wathgill Range. Set amongst this magnificent landscape is 20,000 acres of military training area and we were going to have the chance to test our marksmanship with live rounds. It would be just a small taste of the basic training which Reservists experience as part of their qualification as infantry soldiers before putting any of their skills to the test.

We were asked to take a prone position at the 200-metre firing point. We were individually supervised by a Reservist Safety Supervisor who loaded the rifle on our behalf and in my case kindly adjusted the sight to reduce the risk of the recoil catching me out. The Reservists were taking part in an Annual Combat Marksmanship Test (ACMT) which qualifies the soldier in shooting for the year. With opportunities to progress from infantry soldier, to Chef, Combat Human Resources Specialist, or Combat Medic Technician within the company, the Army Reserve prides itself on not only teaching basic soldiering but also giving the opportunity to develop more specialist skills and qualifications.

CSgt Mat Hardy explained: “The Army Reserve is always looking for volunteers to join and fulfil their potential. As well as getting paid generously to train in their spare time, Army Reservists can gain transferrable skills and qualifications that they can use in their civilian occupations. Employers are getting twice the employee by having an Army Reservist on their payroll.”

The men and women on the training weekend certainly came from a wide variety of backgrounds. Day jobs varied from teachers to police officers, engineers to apprentices.

Training does not have to be done all at once but can be worked around availability. The time which needs to be given can be as few as 19 days a year and it is the chance to get involved and be paid for everything that the Regular Army does, from combat to peacekeeping and humanitarian work. Army Reservists I spoke to are due to be deployed for six months to Mali or Afghanistan next year and their employers will be holding their jobs open until their return.

The motivation to join varied widely from already having experience in the Cadet Force, to always wanting to join the Forces, to experiencing the fitness and adventurous training as well as the camaraderie of the Army.

Balancing the day job, home life and Reservist training did not seem daunting to those I spoke to.

Cpl Steve Grant said: “I joined the Army Reserve when I was 18 because I wanted a challenge and a way of earning a bit of extra money. I had seen friends and family join before me and I thought I’d give it a go. Since joining I have made so many great friends and been to places I would have never dreamed of going. I have also volunteered to do an operational tour in Iraq and a UN Peacekeeping tour in Cyprus as well as training in places like Jamaica, USA, Croatia and Cyprus to name just a few. I also like the free gym that we have as it certainly keeps me fit.”

In the course of the year the company also takes part in local ceremonial activities such as Remembrance anniversaries, Armed Forces Day as well as recruiting events and is on standby for local resilience tasks.

After lunch, we returned to the moors, crossing dramatic scenery alongside the River Swale to Feldom Range. Reservists had marched to this location and would later be completing their land navigation test to return to camp that evening. Before then they would be firing the 40mm Underslung Grenade Launcher at distant targets and practising static individual battle skills on a purpose-built range of obstacles and pop-up targets. The sheep, of which there must be thousands on the moors, formed a very respectful wide arc, far away from the ranges and continued to graze. The drill for receiving instruction, observing safety and firing precision was as meticulous as on the rifle range and witnessing a 100% score from one Reservist was certainly impressive.

In February, 4 (Lincolnshire) Company Reservists will be taking part in Exercise Wessex Storm; the chance for the Army Reserve to compete against the Regular Army to demonstrate their skills on the battlefield. It will be a challenge the Reservists are looking forward to accepting.

If you would like to discover more about the opportunities to join the Army Reserve in Grimsby or Lincoln and Lincolnshire contact: Colour Sergeant Mat Hardy, 3ANG-4COY-RSUSO@mod.gov.uk, 07970 333932 or visit https://apply.army.mod.uk/what-we-offer/reserve-soldier facebook: 4 Company 3 Royal Anglian

SOBRAON COMPASS IN FOCUS
Pictures for this feature are courtesy of Keith Balcombe and George Hardy, members of Cleethorpes Camera Club. The club was founded in 1951 and now has nearly 90 members. This very active group have four meetings a week and meet in their Club House at the bottom of a short driveway between 49-51 Reynolds Street, Cleethorpes DN35 7TU.

If you would like to find out more visit: www.cleethorpescameraclub.co.uk