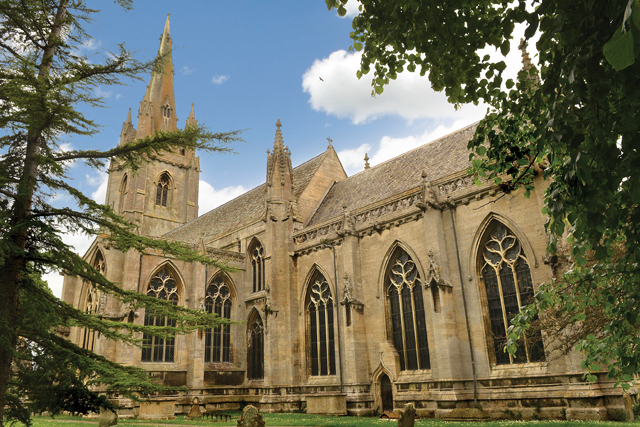 The south Lincolnshire village might be small in terms of population and size, but it is big in community spirit and has much to boast about.
Not only does it host one of the largest village shows in the county, but it also has a windmill, which is the only example of its type still standing in the UK and even Europe.

Parish Council chairman, Richard Higgs said Heckington – which is nearly 1,000 years old, having been first mentioned in the tenth century – is a wonderful village with plenty going on for everyone.

Mr Higgs said: “Heckington is a very vibrant village and we have every conceivable facility. It is quite a big village, but it is very friendly and neighbourly. There is something for everyone and we encourage people to get involved in village life.”

Heckington is one of Lincolnshire’s largest villages with just under 1,500 households and a population of 4,000 mostly in the village but a few hundred living in the surrounding area.

There is a railway station, bus links, clubs and organisations of all kinds, including amateur dramatics, line dancing, arts and crafts, bellringing, brownies and guides and cricket and football. It has a village trust which is very active and well supported and its community swimming pool is marking its 40th anniversary.

“Our swimming pool is a little gem. Very few children leave the village primary school not knowing how to swim and there are adult-only swimming lessons for people to learn to swim and get a bit of exercise,” said Mr Higgs.

Heckington has long been known for its unique eight-sailed windmill and it is about to enter a new chapter in its amazing history, with the purchase of the historic buildings and land around it.

The tower windmill, built as a five-sailed mill, was turned into an eight-sailed mill after serious storm damages in 1890-92. It was formerly named Pocklington’s Mill after its last owner, John Pocklington and in 1986 it underwent restoration.

In May, the long awaited new sails arrived and now the mill is going to be turned into a visitor attraction and education centre thanks to a successful and extensive Heritage Lottery Fund grant.

Jo Lewin, project member with the Heckington Windmill Trust, which runs the windmill on a day to day basis, said there are all sorts of exciting things happening at the moment.

“We have been awarded a lottery grant to develop the site as a tea room and education centre and the new sails have arrived. The windmill is a fully working windmill and is the only working eight-sailed windmill in the northern hemisphere,” said Jo.

“It is quite exciting. Heckington is a fantastic village and so many people want to get involved. Community life is fantastic.”

A twelve-month build programme commencing in 2015 followed by a fitting-out programme points to a 2016 completion. A repair and restoration programme is being drawn up for the granary, cart shed, garage, bakehouse, brewery, Nissen hut and the millhouse.

“Restoring their original appearance on the outside will recreate this unique Victorian complex and make an instant impression on visitors who will then experience a real wow factor on entry,” said Jo.

“High quality exhibition space, a shop and toilets with disabled facilities set the tone, but it is how the bakehouse, windmill, cafe and brewery combine in an interactive way that will really make Heckington Windmill an outstanding attraction.”

The Field to Fork concept will be explored from grinding in the mill to baking in the bakehouse, to eating and enjoying in the cafe. Sitting within the miller’s cottage, the cafe itself will be modernised and seating will be extended upstairs. A similar concept – but more fittingly titled Grain to Glass – will be accessible in partnership with the independently run Eight Sail Brewery, which complements the work being done by the Trust.

Jo said tourism will benefit on a regional level, as the centre will link with attractions such as the new Lincoln Castle development housing the Magna Carta, or more cultural resources such as the National Centre for Craft & Design at The Hub in Sleaford.

“Heckington is already a vibrant community but will surely see benefits to its image, economy, culture and the lifestyle of those living in and around the village,” said Jo.

Heckington is also renowned for its annual show which takes place at the end of July and it has taken place since the 1800s. Jo is also treasurer and web editor of the Heckington Show and said it is now entering its 147th year and bigger and better than ever.

“Totally run by volunteers, it is a village show but very much a county show size. We still have the jams and marmalades and homemade cakes section, but we have the largest heavy horse display in the county.

“Trade stands are absolutely full and there is a waiting list. The show is different this year because there is a new Health and Beauty marquee.

“Although the show is totally run by volunteers, visitors total nearly 30,000 over the two days of the event.”

There are more than 250 tradestands, fairground rides and stalls, offering a huge variety of goods and services.

There are cycling events, athletics, terrier racing, and display teams as well as showjumping, vintage tractor drives, and grand parade of livestock.

Heckington Show has its origins in the village’s 900-year-old feast week linked to the Feast of St Mary. It can be traced back to 1863 and the current site has been the show’s venue since 1867.

Heritage is a big part of Heckington village and one village group exists to maintan and protect the village’s character and atmosphere. The Heckington Village and Railway Museum Trust formed thirty years ago and, among other things, it campaigned for the A17 bypass to be built, saved the windmill from closing and transformed the old station building into a railway museum.

Trust chairman, Andy Garlick said: “A lot of the keen volunteers are getting older so we have a lack of active volunteers at the moment. We are having a stall at the Heckington Show this year to try and attract some new blood and to foster the history of the village, show what we are doing to keep an eye on the village and what is going on from a heritage point of view.”

One long-term project the Trust is now involved with revolves around the plan to introduce remote signalling along the railway line between Boston and Skegness.

“This means Heckington’s Victorian signal box will get taken out and the signal box will go out of use, so we are going to try and get hold of that and add it to the museum,” said Andy. “Our view is that we have a wonderful village and we want to keep it that way.”

Heckington Station Railway Museum is housed in the original 1859 Heckington Railway station buildings, which have been carefully restored to their former glory, having been saved from British Rail demolition in 1975.

Three miles from Heckington lies the linear settlement of East Heckington, which is smaller than its counterpart and spread across two parishes – Heckington and Great Hale.

Ecotricity has been given permission to build a twenty-two-turbine wind farm on Heckington Fen on a site at East Heckington, which would generate enough electricity for about 40,000 homes.

FASHION SHOP RETURNS TO THE VILLAGE
Heckington is one of the few villages in Lincolnshire that can boast its own ladies clothes shop and it is all thanks to the vice-chairman of the Parish Council, Jan Palmer.

Jan established Lindsey James ladieswear in 1993, following a bad experience in a top retail outlet, and her business has gone from strength to strength.

“I got looked down on in a clothes shop, so I decided then that there must be a market for ordinary people who wanted to buy nice clothes,” said Jan.

“We stock casual to occasional wear. We specialise in mother-of-the-bride outfits and we have a stock of 450 hats. We sell classic with a modern twist. We are the only ladies shop in the village and there are very few ladies dress shops in the county now.”

Having outgrown two original premises, in September 2002 the business moved to a converted barn in Heckington Fen. But it has since expanded again and moved back into the village itself, into the former Royal Oak public house building.

“We moved back into Heckington about eight weeks ago. We converted the pub in just five weeks and it is all worth it, as we have had a lot of the regulars in to see us already,” said Jan.

“We like being in the village and think it is good for the village that we are here. We are helping the local economy because we get visitors from a wide area and they often go for coffee or some lunch in the village.”

Lindsey James has a traditional attitude to looking after its customers and Jan says service is the key.

“We offer that local, personal, individual service and we have lovely, longstanding customers who have helped Lindsey James become what it is today. We feel we have become part of a large family,” said Jan.

Lincolnshire born and bred, Jan has lived in Heckington since June 1980 and is well-known by the community, not just because of Lindsey James but because of her council work.

“I like to be involved in the village. I am vice-chairman of the Parish Council and well-known in the community and my council work is my hobby.”