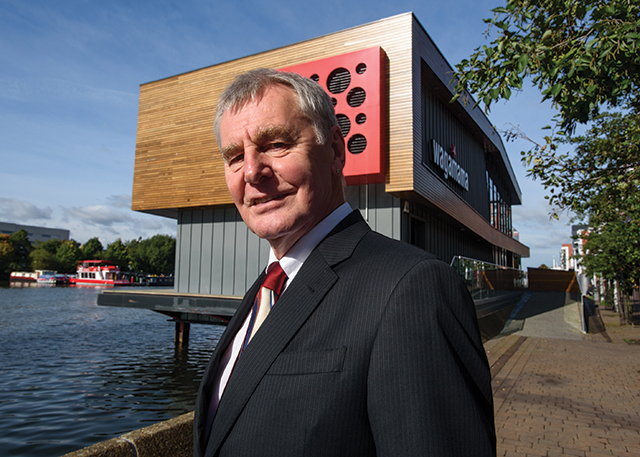 Massive investment, innovative thinking and exciting regeneration projects have radically changed the face of Lincoln over the past 30 years and developments currently underway promise to make the city even more vibrant in the years ahead.
Many movers and shakers, who have played a key role in the city’s rising fortunes, remain as passionate as ever about maximising opportunities to share their experience and influence its growing success.

David is about to celebrate his 70th birthday and remains actively involved in initiatives to raise Lincoln’s profile and boost jobs.

More than twenty-five years ago, he had the vision to see how a university could supercharge Lincoln’s fortunes and stem the brain drain of Lincolnshire talent. The private-sector led TEC involved a partnership of business leaders, senior council officers and trades union representatives.

The devolvement of Central Government funds at that time allowed the organisation to put money to work locally and, because the Government would not sink capital funds into a university, step into the breach.

It should come as little surprise to learn that David acted on this opportunity. At its height, the TEC (launched in 1991 and superseded by the Learning & Skills Council ten years later), had 200 staff and he had always strongly believed in the importance of putting young people on course for a brighter future and the value of introducing initiatives that would underpin growth.

“Back then I estimated that a University for Lincoln would inject £50 million a year into the local economy, but I didn’t expect that figure to exceed £250 million, as it does today,” said David.

“It is great to see the amazing difference it has made and to watch the university’s ongoing expansion and see how the millions still being invested are helping to equip the county with the skills it needs for the future and encouraging talented people to set-up new enterprises here.”

Chairman of the former Lincolnshire TEC and chair of Investors in Lincoln, Keith Darwin said: “What is significant about the University of Lincoln is that David suggested to the TEC Board that it should co-fund the development phase of the university with Lincolnshire County Council.

“The then education director Arthur Ridings took the proposals to Leader Councillor Jim Speechley, who supported it, and the authority agreed. The TEC pledged it would provide fifty per cent of the required funding during the development phase. However, nobody knew whether it would work or not.”

A development board was formed and a fundraiser recruited to see if it would be possible to raise the necessary £20 million to get the ball rolling.

“That sparked a ‘beauty contest’. Interested universities pitched to establish a university college in Lincoln. This would effectively have been a branch of their own university. Nottingham Trent was the winner,” said Mr Darwin.

“What we have today has exceeded everyone’s expectations. Firstly, we never envisaged that the university would eventually be solely based in Lincoln and, at the time the TEC disbanded, that a report would claim that the university was responsible for sixteen per cent of Lincoln’s GDP.”

More recently it has been quoted as being the catalyst for attracting in the region of £1 billion worth of investment in Lincoln. The evidence can be seen in the form of new student homes, the arrival of new hotels, leisure and hospitality businesses and shops.

David’s work towards the creation of the University was publicly acknowledged when he was awarded an Honorary Doctorate in 2009.

Whilst at the TEC, David was instrumental in forming LEAP, the Lincolnshire Economic Action Project. It enabled the TEC to use part of its surplus to foster economic projects.

Funds remained after the demise of the TEC, which allowed existing public/private partnership Investors in Lincoln to buy Beech House in Waterside South, originally home to the TEC.

“One of Investors’ earliest projects, funding-wise, was the conversion of Doughty’s Mill in Broadgate into flats. We also launched the Lincoln Managed Workspace off Greetwell Road, which provided space for a variety of businesses who were able to share secretarial facilities. This has subsequently been doubled in size,” said Mr Darwin.

Investors also secured grant funding which facilitated the opening up of Beevor Street in Lincoln. That was a winning move. Previously none of the roads in the area had been adopted and that had long proved a major stumbling block to regenerating the area.

“David was involved again in our recent leasing of Beech House to the Lincolnshire Community Health Services NHS Trust, following a £1million pound revamp. We have since also sold the investment opportunity in this property.”

The work of Investors is not only breathing new life into various parts of the city but generating funds for other purposes, including helping The Brayford Trust to maintain Lincoln’s historic Brayford Pool.

Former Lincolnshire TEC deputy chief executives Tina McEwen and Mary Lord have also shared their admiration for David’s achievements and paid tribute to the way in which he allowed them to help improve life for Lincolnshire families.

“David’s key strengths are his ability to think strategically and creatively in a way which makes things happen. He can think around problems that most people cannot see and find a solution,” said Mrs McEwen.

“His other great strength is his ability to work with people like myself and Mary. He was always very good about giving us an overall lead objective and then the space to deliver it appropriately.

Mrs McEwen said, through David, the TEC had been able to help young people, including those with special needs and learning disabilities. He had also introduced job sharing, allowing people to have more than one part-time job and come off the unemployment register.

Mary Lord recalled how she met David when she was working at Lincoln College over a quarter of a century ago, when he returned to his home city of Lincoln to set up the TEC.

“David’s vision of how it could operate and what it could achieve was most inspiring, not just to me, but many others who joined the organisation to help him achieve it. I had no hesitation in applying for a position on his Senior Management Team and was delighted to be offered the job of his deputy chief executive,” said Mrs Lord.

“Under his leadership, Lincolnshire TEC soon became recognised nationally as a role model to the TEC network in terms of quality, performance, innovation and governance.

“The idea of a University of Lincoln had been talked about for years, but it was the establishment of this university project in the early 1990s to raise the initial £20 million, which actually lit the touchpaper and, a few years later in 1996, the university vision became a reality.

“As the university has gone from strength to strength, and with the passage of time, the significance of the pioneering work done – against considerable odds at the time – should not be underestimated.

“It should be an inspiration to both its staff and students past and present to know the unique story of how their university came about and that the existence of this proud institution resulted from the vision, drive and determination of local people such as David Rossington.”