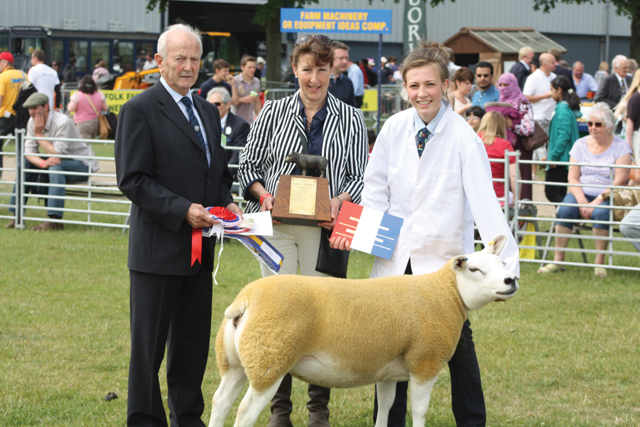 Breeding and showing pedigree sheep isn’t a typical job for a twenty year old, but that isn’t stopping Tessa Bustance, who is challenging stereotypes and proving she’s every bit as capable as her older, male peers.

She may have only started showing her Eaubrink Texels a couple of years ago, but Tessa has already secured some impressive victories over some old hands – including bringing home the rosette for breed champion from both the Lincolnshire and the Royal Norfolk shows last summer.

Now Tessa, who keeps her prizewinning flock at Moulton, near Spalding, hopes they can help her repeat the feat again this year.

“It’s quite nerve-wracking going into the ring at the bigger shows, as there’s hundreds of people watching you,” she said.

“Most of the others showing tend to be older men – there are not so many younger shepherdesses – so it’s nice to be able to compete against them on level terms and do well.

“I was delighted to win last year, especially as I’ve only been showing for a couple of years. I’m going to both the Lincolnshire and Norfolk shows again this year and am also thinking about trying the Yorkshire Show too.

“It’s a much bigger event though, so I’m going to wait and see when the closing date for entries is. I might even leave it until next year, as it’s taken me three years to build up to competing at county shows,” she adds.

Working with animals has been second nature to Tessa since she was a small child; her interest in sheep in particular began when she started helping her stepfather, Andrew Vernon, with lambing duties for his commercial flock of 500.

“I grew up around animals and used to help my stepfather on his farm with the lambing, from the age of around seven,” recalled Tessa.

“I used to bottle feed all the cade (abandoned) and third triplet lambs and keep them and the ewe lambs, which I built into my own commercial flock.

“I started off with just two ewe lambs and as the years went on I got more and more until I had about forty commercial ewes. I had these, and then their lambs, and then I sold some of them. I did that for around three years when I was about twelve.”

Tessa initially kept all sorts of Texel crossbreeds, selling on her lambs and saving up her money, until she decided she wanted to start showing them – inspired to take the leap by her brother Josh, who keeps and shows British Blue cattle as well as his own flock of Blue Texels.

And when it came to which breed, there was only ever one contender as far as Tessa was concerned.

Texels, which originate from the Island of Texel, off the Dutch North Sea coast, are hardy, tough and docile. Popular for their adaptability, the medium-sized breed was crossed with others including Lincolns and Leicesters during the late nineteenth century and then imported to this country from France during the Seventies.

“It had to be Texels – I just love them,” explained Tessa. “They’re a nice looking animal and they have a nice temperament. Plus I have some friends who I helped out at lambing time, who kept Texels too, so I knew more about them and that drew me more towards them as a breed.”

Tessa, who has named her flock Eaubrink after her grandfather’s Norfolk farm, bought her first five pedigree animals in December 2010 and was thrilled to come away with a second prize at her first attempt at showing them the following May.

“I just did one small show in the first year, at Woodhall Spa. I took two ewes along and got a second place with my favourite, which was nice,” she said.

The work of getting the sheep ready for the all-important show day begins months in advance as the animals need to be in peak physical condition before Tessa starts to work her magic with the wash and dye.

“They need to be fit and be big enough,” said Tessa. “Usually a week in advance I wash them, wash their wool and everything so that they are all just white, and then it’s usually about three days before the event when I dye their fleece a yellowy orange colour, that’s so their white head and legs stand out and hopefully they catch the judge’s eye.

“I don’t hold or hand train them – many people spend a lot of time training them, but I find that it doesn’t make that much difference to be honest. The main thing is to keep them clean.”

The life of a shepherdess can be tough. Tessa had just finished lambing at the time of our interview, which involves her regularly checking on the ewes throughout the night, giving them a helping hand where needed and looking after those newborns, which, for whatever reason, aren’t being cared for by their mothers.

As if that wasn’t enough to keep her busy, as well as tending to her flock Tessa also works at her family’s recently opened business – Wimberley Hall Farm Shop, in Weston – where she looks after the accounts, stocktaking and ordering. While on Tuesdays for the past two years she’s been working as an auctioneer’s clerk at Melton Mowbray livestock market, where her responsibilities include booking in the animals, and recording information such as how much they make at sale and who has bought them.

Despite all her hard work Tessa takes great deal of pleasure from her various roles and eventually hopes to make looking after the sheep her full-time job.

In the meantime, the show must go on for Lincolnshire’s real-life Bo Peep – and judging from her success to date we’re sure there’s plenty more rosettes to follow.