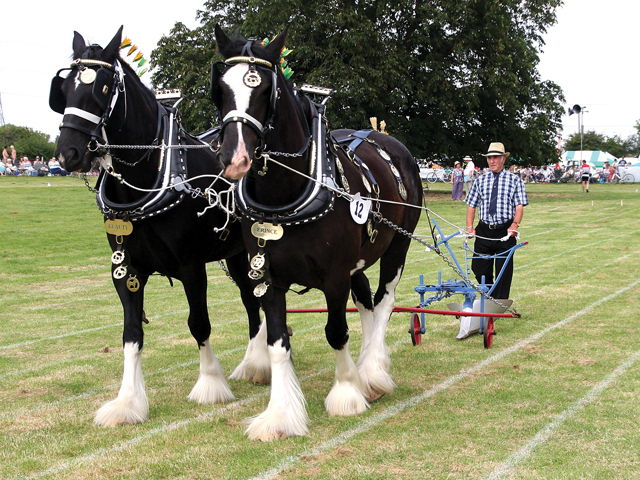 A grand day out for all the family is promised in Heckington later this month, when the village opens its doors to the rest of the county and beyond for its 144th annual show.
Those who have attended past events will know that nothing else quite matches the two-day spectacular for the relaxing way in which it combines the intimacy of a village show with the expectation of the national stage.

With agricultural, horticultural and craft activities alongside a raft of exhibitors and displays from across the country, plus children’s fairground rides, animals, shopping, sporting competitions, and much more, the event offers something for everyone.

While many village shows have floundered in recent years, often the victim of a lack of support, Heckington Show has grown spectacularly and last year more than 24,000 people passed through the gates to enjoy all the entertainments and activities associated with the quintessentially English village show.

Charles Pinchbeck, village show committee chairman, puts the event’s popularity and longevity down to its welcoming atmosphere and universal appeal.

He explained: “We have a tremendous variety of activities and there is something that everyone wants to see. There is something for old and young and everyone in between. We see families coming, sometimes three or four generations all together, all enjoying their day out.

The show takes place on Saturday and Sunday, 30th and 31st July this year, set in eighty acres of Lincolnshire countryside, on ancient grounds shaded by fine trees in the shadow of St Andrew’s Church and Heckington’s eight-sailed windmill.

The origins of Heckington Show lie in the village’s 900-year-old feast week, which is linked to the feast of St Mary. Organisers can trace a country show back to 1864 and the current venue has been in use since 1867. Over the years the show has also played host to many illustrious sporting competitors including Sebastion (now Lord) Coe, cyclist Victoria Pendleton and show jumper Harvey Smith. Interest in the athletic and cycling events was high in 2008, the last Olympic year, and as London 2012 draws closer event organisers are expecting even higher entries this year.

The main ring forms a natural banked grass track and cycle racing has been documented since the days of the Penny Farthing. The cycle races range in distance and style, offering opportunities for riders to win prizes but the National Grass Track 8km event is by far the toughest of them all.

Visitors to the show have more than 200 competition classes including handicrafts, art, cookery and photography to look forward to, plus animals, tractors, live entertainment and the chance to find out more about the history of the area. There will also be spectacular main ring demonstrations including medieval jousting, FMX display motorcycles, 95th Rifles and terrier racing.

Mr Pinchbeck highlights the Saturday night grand firework display and open air concert as one of the most keenly anticipated performances planned for this year’s show, when Beethoven’s ‘1812 Overture’ piece ‘Wellington’s Victory’ will be the theme.

The history of Heckington Show has also been brought together in a book by life member and long standing cycling secretary Ray Bell. ‘The Heckington Show’ book gives a detailed history of the event from an insider’s viewpoint and copies will be available from the programme huts at the show.

As well as home to the country’s biggest village show Heckington also boasts a number of other impressive tourist attractions, which visitors can enjoy during the weekend, including the country’s only surviving eight-sailed windmill.

Heckington Mill was built in 1830 by Edward Ingledew, of Gainsborough, for Michael Hare, and originally had five sails. The cap and sails were blown off during a severe storm in 1890 and were repaired two years later by John Pocklington, who replaced them with a cap and sails from a mill in Boston.

The historic building ceased work in 1946 and was left to deteriorate until 1953 when it was bought by Kesteven County Council. The authority carried out repairs and made the mill safe and then in 1986 it underwent restoration. Further, major repairs were carried out in 2004, when the mill was brought back to full working order. It was forced to stop working again last year to allow for more repairs to the sails, but the volunteers who look after it hope it will be working again soon.

Now the property of Lincolnshire County Council, the historic building is operated and run on a voluntary basis by the Friends of Heckington Windmill. As well as being able to take a guided tour of the five floors, visitors can also enjoy refreshments in the mill’s tea room, and buy souvenirs from its gift shop including stone ground flour.

Across the road is the village’s Railway and Heritage Museum, where the redundant station buildings have been faithfully restored to their former glory. They are now home to a small museum of railway artefacts, along with a heritage collection of village information.

And finally, a visit to Heckington would not be complete without taking in the view of the impressive fourteenth century parish church of St Andrew’s. This magnificent building houses the Easter sepulchre and the tomb of Richard De Potesgrave Rector of Heckington and Chaplain to Edward II and Edward III.

With so much to see and do, it is no surprise that visitors return to Heckington again and again to enjoy a truly wonderful day out for young and old alike.

* Day entry to Heckington Show is £7 per adult and £2 per child. Under 5s go free. Weekend badges are available in advance priced £10 for adults and £3 per child. For more information visit www.heckingtonshow.org.uk