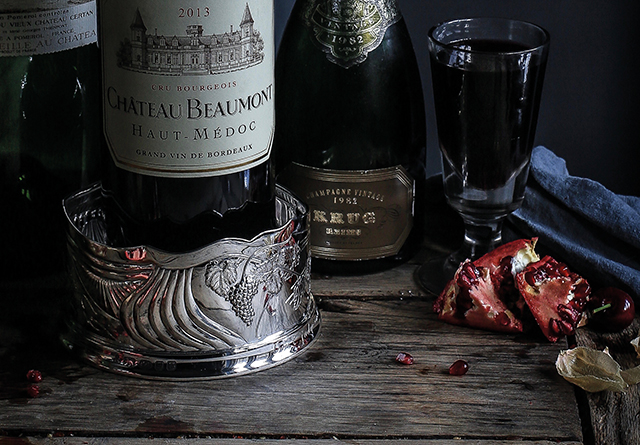 “Life has a much better imagination than me,” says celebrated silversmith Shannon O’Neill. She tells Kate Chapman about her career, which has taken many exciting twists and turns before bringing her to Lincolnshire.

Shannon O’Neill has been privileged to work overseas, made props for blockbuster films and more recently was awarded the prestigious commission to design the trophy for the Grand National – for a second time.

Her workshop is in a former stable in the grounds of Burghley House, Stamford, and it was from here that she created the award for the world’s greatest horse race after representatives from principal sponsors Randox Health saw her work on display in London at The Goldsmiths’ Company Collection.

After much research Shannon came up with a stunning design, using subtle details to perfectly tell the story of the race, which has been part of the British landscape since the 1830s, while also incorporating the preventative healthcare innovations of the event’s main sponsor.

Based on the classic coupes-style Champagne glass, her glittering trophy features an interpretation of healthy brain synapses and blood cells masquerading as Champagne bubbles. Another of its striking features is an ECG, which runs around the top edge, depicting the healthy heartbeat of a thoroughbred, acquired from top equine surgeons at Newmarket.

“It was such an honour to receive this commission,” says Shannon, “but no one person could have created this by themselves, which is why it required me to incorporate the skills of other smiths with a wider skill base.

“It was thanks to The Goldsmiths’ Company and some of the very best and most experienced silversmiths in the country who I’ve had the privilege to work with, that I was able to bring this design to fruition.

“It was a real privilege to be asked to design the trophy, especially since it was my second time and I had a wonderful time watching the race.”

Although she’s always been creative, Shannon, who grew up in Liverpool, originally set her heart on becoming a dancer and following in the footsteps of her sister, who attended the Royal Ballet School.

Fate, however, had a different idea and after sustaining a back injury she ended up pursuing her passion for art, studying sculpture at the University of New Delhi, India, before achieving a first class degree in three-dimensional design at Manchester Metropolitan University.

Her favoured media were wood and ceramics until she entered a competition in her final year to design a silver water jug.

“Part of the prize was to go to Nayler Brothers, the crown jewellers, to actually make the design,” recalls Shannon.

“At this stage I didn’t really know anything about metalworking, so just designed something with no idea how it would actually be made, while the other entrants were designing to their capabilities.

“It was a close call, but I found out after, my design won because even the crown jewellers had no idea how they were actually going to make it; they were keen for the challenge!

“In the end they did it in two pieces. It was wonderful to have the opportunity to work with them in London and I learnt so much in those two weeks.

“Since then, my design process has followed a similar path. I just have to get it down on paper, and until it appears even I don’t know what it’s going to be, and I concentrate on that, rather than focussing on the practicalities of how I’ll actually make it.

“Everyone else seems to do it the other way round, but I find it helps me keep pushing the boundaries and coming up with new ideas.

“My style is very contemporary, lyrical and flowing rather than made of straight lines and working this way helps me keep everything fresh.”

After completing her degree, Shannon was keen to pursue a career as a silversmith, but the need for a job led her to take work on the film Mars Attacks!, where her metalworking and soldering skills were put to use making armatures.

A six-month contract turned into three years, and then she took the plunge and set herself up as a silversmith, taking commissions for bespoke items including three-legged teapots, cups and condiment sets.

After three years she returned to the film industry, after a client failed to pay for a piece and spent the next few years working on productions including Corpse Bride and Aardman Animations’ stop-motion children’s cartoon Timmy Time.

The urge to return to her silversmith work never waned, but then she was offered a once in a lifetime offer to work in Oregon, which led to three happy years in America.

“I was all set to put down roots in America,” recalls Shannon.

“Oregon was the most amazing place to live and work. Then I got a call asking if I’d be interested in joining the workshop of a silversmith in Lincolnshire. I said thank you, but no.

“I had to go back to England for a funeral, so went to see Barry Witmond, whose studio it was, to say thank you for the offer in person, but as soon as I saw the place I was thinking how can I make this move happen?

“I’d always had this notion, although I absolutely loved the film industry and all the trappings it brought, I couldn’t help feeling that although I was at an amazing party, it was the wrong party. This opportunity would mean I could finally follow my dream of building my own business as a silversmith.”

Shannon initially worked alongside Barry on restoration projects, but eventually decided her real passion lay in creating her own pieces, which to date have included a bespoke christening cup and wine coaster.

“Life seems to have a much better imagination than me. I’ve had a wonderful journey to get to where I am, but now I feel as though I’m following my real passion.

“The plan for the future is to carry on doing what I’m doing – enjoying my work and hopefully my clients will keep enjoying it too.”

For more information about Shannon and her work visit her website www.shannon-oneill.co.uk