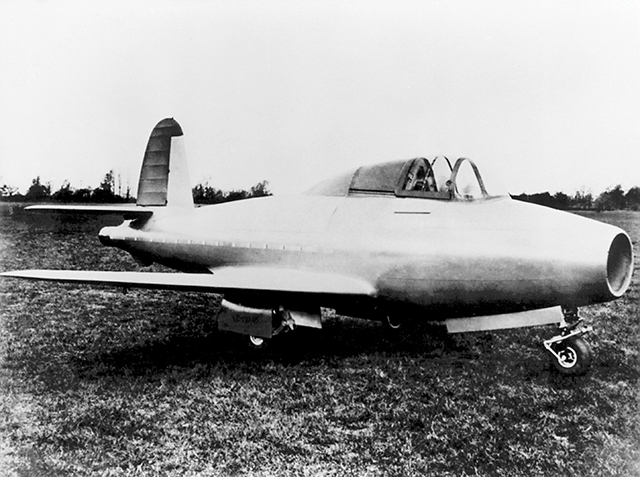 “It seems that as the turbine is the most efficient prime mover known, it will be developed for aircraft. My aim is to show that this air turbine will be more efficient than the petrol internal combustion engine and would be more suitable for high altitude…” – from Frank Whittle’s Cranwell thesis, ‘Future Developments in Aircraft Design’ (1928).

On 15th May this year RAFC Cranwell celebrates the 80th Anniversary of the first jet flight by Flying Officer Gerry Sayer. The man who made it possible was Sir Frank Whittle.

Whittle was the eldest son of a machine tool factory foreman who learnt the rudiments of metal work and how to use the machine tools at an early age when his father bought a small engineering business. His Royal Air Force career started when he became one of 600 apprentices in September 1923 Entry at Cranwell when he was accepted to train as a fitter. His three years as an apprentice gave Whittle a good basic understanding of engineering as well as considerable skill with fitters’ tools. Despite being temperamentally unsuited to the strict discipline of the Cranwell Apprentice regime and environment, throughout this time Frank never gave up the dream of becoming a pilot.

On being awarded a flight cadetship, and his apprenticeship completed, Whittle was discharged as Leading Aircraftman and joined the RAF College as a civilian. The two-year syllabus was designed to make General Duties officers, with a wide curriculum. This included pilot training and, as well as school and workshops and compulsory games, ensured that he remained active! Flight Cadet Whittle graduated from Cranwell in July 1928. The previous five years had been a hard path; but he was now a pilot, an officer and a gentleman, having fought his way out of the working-class background.

Pilot Officer Whittle’s first posting was to 111 Squadron, flying Siskins at Hornchurch in August 1928. In September 1929, he was posted to the Central Flying School for three months on a flying instructor’s course, flying the Avro 504N at RAF Wittering. Continuing his search for a power plant for a high speed, high altitude aircraft, in due course he found an answer, which was to substitute a turbine for the piston engine. He also met an officer – Flying Officer Pat Johnson – who became involved with his project and became influential throughout his life. Whilst at Wittering, Whittle took out a patent which was filed in January 1930. On successfully passing out as a flying instructor, he was promoted to Flying Officer and posted to Number 2 Flying Training School at RAF Digby.

Whittle found there was much enjoyment to be had as a flying instructor, with the added benefit that by remaining close to Wittering, he was able to fly over to see Flying Officer Johnson to continue the development of his jet engine theories, and make the first of several attempts to interest commercial firms in the project. Towards the end of 1930 this included an introduction to the chief engineer and his deputy at industrial turbine manufacturer British Thompson-Houston (BTH) in Rugby. BTH would become invaluable later during the engine’s development.

His next posting was to Felixstowe testing floatplanes, often performing the first catapult launch of a new type of aircraft. Combining his work with the role of Station Armament Officer, Whittle’s 18 months as a marine test pilot included an attachment to HMS Ark Royal from whose deck he made 46 catapult launches. In August 1932 Whittle was posted to the Home Aircraft Depot at RAF Henlow to study engineering. This brought a substantial change for him, with engineering rather than flying becoming paramount.

After two years at Henlow, he applied to Cambridge University to take the Mechanical Science Tripos. Despite recent discontinuation of this process, his persistence in requesting special consideration was approved. Although continuing his work on the jet engine, he was becoming disillusioned with it and allowed his patent to lapse in January 1935. However, a few months after taking this decision he received a letter that was to change his life “and trigger a revolution in aviation”. It was from an old Cranwell colleague, Rolf Dudley-Williams who together with his company partner – JCB Tinling – agreed to cover the cost of taking out further patents, as they believed that they could secure backing for the jet engine, act as Whittle’s agents and find financial backing in return for a share in the rights of the invention. Although he did not really believe that the time was ripe to attempt the turbojet engine, Whittle encouraged this, persuading them that the patent could be recovered with a series of improvements to the original.

This alliance led to the formation of the Power Jets company in 1936, also involving investment bankers at Falk and Partners and the Air Ministry. A contract was placed with BTH for the design drawings of an experimental engine. The Air Ministry saw Whittle’s work as a “spare time” job, but gave him a postgraduate year for research work after graduating from Cambridge with a First Class Honours degree in the Mechanical Science Tripos, which allowed him to devote most of his time to the turbojet project.

By July 1936, the initial stages of manufacture had begun, the first runs taking place in April 1937. Lack of funding dogged the project, but as test results improved so did Air Ministry confidence, and this brought further Air Ministry funding. Power Jets’ first contract for a flight engine with BTH to power it came in July 1939. Aircraft manufacturer Gloster provided the experimental aircraft, a small aeroplane that could be converted into an interceptor fighter, which was named E28/39. With war only weeks away, Whittle started work on his engine, the W1. This would continue in the event of war with the full support of the Air Ministry.

In 1940, the Air Ministry decided that Power Jets would become a research organisation only, with BTH and Rover sharing the engine production costs. This was not a good situation for Whittle as, eager to obtain an operational jet fighter, both companies authorised Gloster to produce the F9/40 (Gloster Meteor) and also approved alterations to its specification without his knowledge. Production of the new fighter began in October 1940, and Power Jets expanded further. Taxiing trials of the E28/39 were made in complete secrecy at Gloster’s airfield at Brockworth in April 1941.

First Flight at Cranwell
The E28/39 made its maiden flight at Cranwell on 15th May 1941. Cranwell was chosen as it had a long runway with flat, clear, open approaches. It was also easier to preserve secrecy in rural Lincolnshire than in the Gloucester-Cheltenham surroundings of Brockworth.

At 7.35pm test pilot Flying Officer Gerry Sayer began taxiing out to the eastern end of the long runway. Whittle and some of his Power Jets associates had gone by car to a point 400 yards along the runway. After a take-off roll of five or six hundred yards he eased her airborne, and climbed to 1,000ft before entering cloud. After several minutes he came back into view and as he came in, it was obvious that he had complete confidence in the aeroplane. His landing was perfect and the flight had lasted 17 minutes.

Flight trials continued for 12 days, the top speed recorded being 370mph at 25,000ft. The E28 pioneer had exceeded all expectations – Whittle had come full circle. He wrote, in a speech for the Science Museum in 1949, “It was very appropriate that the flight trials of the E28 should take place at Cranwell because it was there that the seed of the whole idea was sown… my quest for an entirely different type of aero engine started as a result of a science thesis I had to write as a cadet.” Now the first jet aircraft had flown.

Frank Whittle retired from the RAF as an Air Commodore in 1946 and was knighted by King George VI in July 1948. He emigrated to America in 1976, becoming a Research Professor at the US Naval Academy in Annapolis; Sir Frank died on 9th August 1996 aged 89, and his ashes are interred in the Church of St Michael and All Angels at RAF Cranwell.

Sir Frank returned to Cranwell on many occasions and had a great affection for the College and the Station. The RAF had taken a shy and studious boy and turned him into an officer and engineer. He was later to say that it was his RAF training that “made possible the jet engine”.

The College is putting on an exhibition entitled I Give You the Jet Engine with an accompanying booklet to commemorate the first flight of the E28/39 on 15th May 1941.