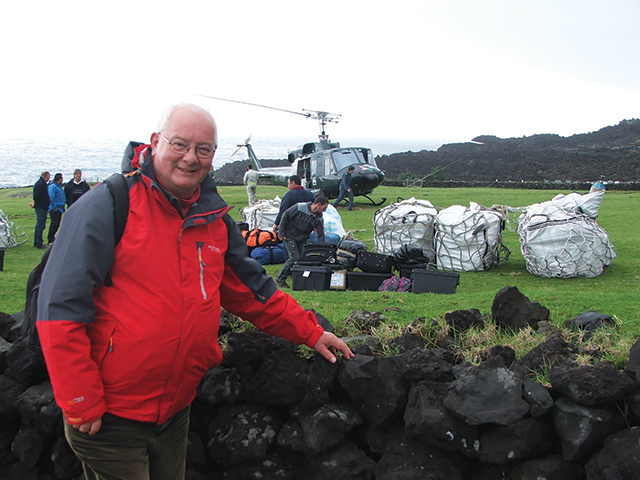 For eight years, Chris was the UK Representative of Tristan da Cunha, a UK Overseas Territory in the South Atlantic, roughly halfway between Cape Town in South Africa and Uruguay in South America; 1,500 miles south of St Helena and 2,400 miles from the Falkland Islands. It’s home to just over 260 people, all UK citizens.

The island was settled by the British in 1816 as a precaution against the French using it in any attempt to free Napoleon from exile on St Helena. Although the garrison left soon afterwards, three stayed on and were later joined by shipwrecked sailors and others who developed a society in which all had to agree on equality of the sexes, religion and race and to work together for the common good, without payment – a philosophy which underpins today’s society on Tristan da Cunha.

Chris began working on a voluntary basis for the island in 2006, after editing the first book to be written by an islander, its sole policeman, Inspector Conrad Glass: Rockhopper Copper. The role took him around the world, as far as New Caledonia in the South Pacific, Réunion Island in the Indian Ocean, Ascension Island, the Cayman Islands, Corsica and Greenland, as well as into Westminster and Whitehall, putting forward Tristan islanders’ views on decisions which would affect their future and arguing their case with politicians and civil servants.

This was the fourth visit Chris and his wife, Julie, have made to Tristan. Although he was made an MBE in the 2015 New Year’s Honours for his work, a further surprise awaited.

At a reception in the Administrator’s home, The Residency, he was presented with a plaque by outgoing Administrator Alex Mitham and Chief Islander, Ian Lavarello.

It said:
‘Tristan da Cunha 200th Anniversary 1816–2016
Chris Bates MBE
In Recognition of your many years of tireless support as The UK Representative for Tristan da Cunha. You have strengthened our position on the UK and world stages, and have been taken to the heart of this island; winning respect, trust and friendship. You may be almost 6,000 miles away, but you will always be part of Tristan da Cunha. Thank you. The whole community wishes you and your whole family a successful, happy and prosperous future.
Ian Lavarello, Chief Islander;
Alex Mitham, Administrator’

Chris said: “For once, I was speechless. Over the years, Julie and I have grown close to the islanders and did our best to protect the future of the island, by arguing the case with politicians, civil servants and others with influence on the need to repair or replace the harbour, to build a new hospital and to invest in infrastructure and education.

“The harbour has been re-aligned and dredged, a new hospital is being built and ambitious plans are in place to eliminate the mice which threaten the unique albatrosses and flightless birds on Gough Island, part of the Tristan archipelago. There’s much investment in the island and the skills of the people and the education of their children and it has been gratifying to be part of building this future – but I was still overwhelmed to be honoured in this way.”

There was also ‘Free Beer Today’ for Chris and his wife in what is the world’s most remote pub, Tristan da Cunha’s Albatross Bar in its capital, Edinburgh-of-the-Seven-Seas – thanks to the Isle of Man brewers, Bushy’s Ale of Man and vouchers handed out by its founder, Martin Brunnschweiler, at the Great British Beer Festival in London in 2015.

Chris had been involved in the development of Tristan’s beer, in which berries grown on the island are infused into beer on the Isle of Man as Island Brew and then sent more than 6,000 miles to The Albatross (though most is sold on the Isle of Man).

There was only one catch with the vouchers for a free drink of Island Brew: they could only be redeemed in Tristan da Cunha, accessible only by a six-day voyage across the South Atlantic from Cape Town. After the journey on the South African icebreaker, the SA Agulhas II, Chris and Julie walked into the Albatross and handed over their Bushy’s free beer vouchers to manager Beverley Repetto – who was more than happy to pour their free drinks.

Chris said: “As we live next door to the Elder Tree Inn in Horsington, we don’t normally have far to go for a pint – but it was worth 6,000 miles and six days on a icebreaker to get a free beer!”