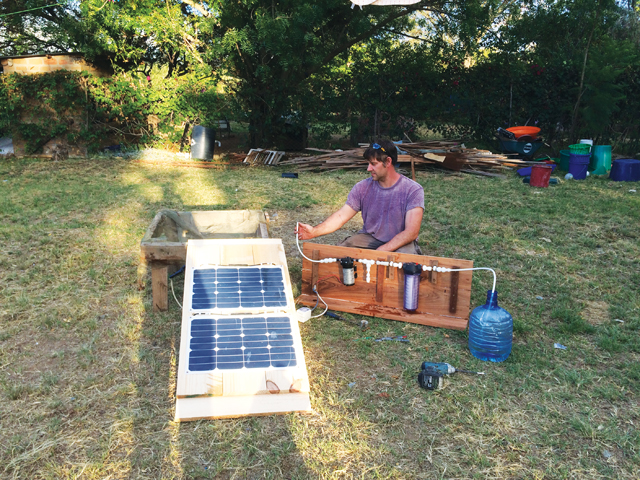 Skill which is making a difference

A desire to help the less fortunate has led to a life-changing experience for one Lincolnshire engineer who has been putting his talents to use helping build a medical clinic in a remote region of East Africa.
Heating engineer Jason Holme (43) visited Tanzania twice last year after volunteering with the small Christian charity Go Make A Difference (GO MAD) – and has vowed to return to help the community of leprosy patients living on the edge of the Serengeti.

“The Kamajoje Health Clinic is just one of the many schemes GO MAD is involved in. As well as helping leprosy patients, it’s also involved in projects at an orphanage and meeting other health needs such as building water tanks, pit latrines, providing secure housing, goat pens, as well as educational projects with Swiss and UK charities.

“My role was to connect with the ongoing work of the new health clinic,” explains Jason, who has run his own company Holme Plumbing and Heating, in Grantham, for around twelve years.

“My skills as a heating engineer were used to the full, as this joint co-operation between the charity and the Tanzanian government required mass water storage and piping to facilitate the demand for water this clinic and its staff will require.

“We had to build a 47,000-litre rainwater tank, which required a pump to push water to a catchment tank set in the roof of the clinic, and throughout the building serving the maternity and treatment rooms, taps and wash facilities.”

Jason, who first visited the continent last September, found out about the charity’s valuable work after hearing Padre Stuart Foster, Chaplain to the Duke and Duchess of Rutland, speak about it during the harvest festival at Belvoir Castle.

“Myself and my partner Sam just went along for the festival. When Padre Foster spoke, we just looked at each other, and without saying anything, we knew we were going to do something to help,” recalls Jason.

“We just had to help these people – they have got absolutely nothing, while we often moan about the most ridiculous things. It’s so easy to take things for granted.

“I remember when I first arrived in Africa, it was hot and sticky, and I needed a drink of water. I reached into my rucksack and quenched my thirst with clean, coolish, water – not such a luxury for the people I was visiting.”

Jason was shocked to see African poverty first-hand and recalls how adults and children suffering from a range of life-threatening diseases such as typhoid, malaria, TB, malnutrition and HIV would be ferried to the nearest clinic via the Land Rover fleet being used to transport volunteers. Often these mercy missions would take up to forty-five minutes across terribly rough terrain.

Jason was able to provide a whole host of skills to the charity during his first three-week visit including concrete mixing, welding, joinery, pipework and water filtration. The rest of the UK volunteer team included Jason’s partner Sam McCarthy, an art teacher, plus three doctors, two nurses, a physiotherapist, three other teachers, a scientist, two supermarket managers, a civil servant, as well as Padre Foster.

Jason was then invited back in November to complete his work on a system to purify the untreated water supply at the lodge – which houses volunteers who stay for weeks, months and half-yearly periods – and he spent the time between visits sourcing materials and designing a solar pumping station for the medical centre.

The return journey was a very different experience from Jason’s first, especially since he had to leave behind Sam, now his fiancée, after he proposed during their previous trip together.

He was also a solo traveller this time, laden with expensive goods in a vulnerable area for lone Europeans.

“When the time came to undertake this 24-hour journey by plane, coach and Land Rover, I was laden with two suitcases full of pumps, pipes, filters, solar panels, fixtures and fittings,” he says.

“What clothes I had fitted into a small holdall – it was basics only; besides people of this part of sub-Saharan Africa are lucky to have any clothes to stand in, let alone a wardrobe.

“Standing on the platform at Grantham Station with Sam was the hardest part and having to say goodbye was a test of faith all round.

“Upon arrival at Nairobi I remember the heat hit me like opening an oven door to check on the Sunday roast. Stepping from the hustle and bustle of the international airport I could see a group of giraffes in the nearby African bush.

“After a stopover in humble accommodation it was time to catch a public bus to the Tanzanian border – nine hours later along the Rift Valley and Serengeti I was met at the border and picked up for a two-hour drive in a Land Rover to get to Eagle Lodge.”

Jason’s first task was to sort out the drinking water at the lodge in the Anglican compound, which houses up to forty volunteers during the summer months.

This was an essential task and involved installing a seven-stage filtration system with a UV light to kill any remaining bacteria. Once this was complete Jason’s next job was to construct the solar pump station and run a test in the garden.

“Having such a short time to complete these tasks, it was a great relief to be able to say it was a job well done, and give my thanks to all the team who carry out the good work, and those in the UK supporting this work to Make A Difference to villages along the edge of the Serengeti plains and the heavily polluted and infested Lake Victoria.

“I’ll definitely be going back to help such a worthy charity again.”

* For more information about the work of Go Make a Difference visit www.gomakeadifference.co.uk