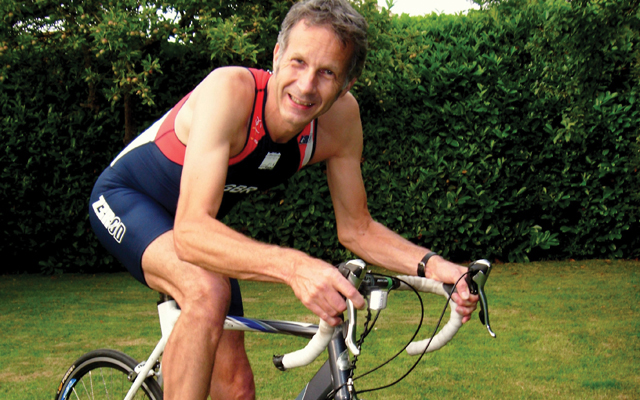 “How the heck do you manage to keep so slim?” It’s not every day we hear that remark is it? Sadly it wasn’t me being asked but me asking my insurance broker Jon Fowler, as he sat in his polished wood office chair.
I genuinely wondered how he does it. He is fifty-two and sits in the office all day. Little did I know just how much he crams into his life outside the office.

His one-word reply to my question was, “cycling.” In the next few minutes I discovered he is currently second fastest in Great Britain and eighth fastest in the world according to the ITU Duathlon World Championships 2013. Suddenly all my mental images of him rooted to that office chair for years, growing older and ‘wider’ vanished in a blur of flying alloy wheels, steep mountain roads and chequered flags.

Jon told me that a couple of years ago, as he saw fifty was fast approaching, he needed to find something other than his day-to-day routine to keep body and mind active.

“I read that the way to slow down time was to get out of your comfort zone,” he said. He was already a coach and runner at Cleethorpes AC and took part in track and field, cross country and other club events. “Feeling I could give more from myself, I progressed to triathlons.”

Towards the end of 2011 Jon entered three East Midlands series events: the April 2012 Lincoln sprint tri; the May 2012 Southwell tri and the June 2012 Woodhall Spa tri. Jon’s overall position was fifth in the over 50s category.

Then in early 2013 Jon entered a duathlon. This is where he found he excelled, because he did not have enough spare time for the hours of training needed to include swimming in the triathlon. This event provided the opportunity to qualify for the world championship event, which would take place in Canada.

Jon explained: “I can honestly say I was very nervous but gave it my all and actually won my age group! So here I was, travelling with my wife Anne and daughter Emma to cheer me on. It all felt more than a little surreal at this point; here I was actually travelling with the GBR team including the famous James Cracknell. He was on TV recently having had an accident on his bike,cycling across the USA. ‘Wow,’ I thought, ‘what an honour. Me representing my country.’”

Following the events in Canada where Jon was now eighth fastest in the world he was feeling very proud of his achievements. He joined his fellow GBR teammates at Carsington on 6th October 2013 for a Duathlon to push himself a bit more. This event was longer and had “a few hills” in there to get the blood pumping.

I wondered just what Jon meant when he said “a few hills” and that it was longer so I took a look at it on the internet. (The Ashbourne Duathlon English Championship. Location Carsington Reservoir, Derbyshire, Derbyshire, DE6 1ST.
Website www.punishingevents.com)

The description was of a 12k undulating run around the perimeter of Carsington Water, followed by a hilly 40k bike, finishing off with a flat out and back 4k run. Hell’s bells, no wonder he looks like a racing snake.

Jon explained: “There was a duathlon qualifying event on 10th November 2013 at Grafham Water for the European team; I had to finish in the top four in my category so, no pressure!

“I finished a creditable second and so now I am off to Horst, Holland in April to push myself once again and hopefully come home with a medal. Hopefully I will do okay at Pontevedra, Spain in the world championships too!”

I asked Jon about his bike, it must have cost quite a bit of money? Apparently the serious cyclists have two bikes, one for practice and one for ‘the real deal’. He laughed because when he entered that ITU Duathlon event in Canada he was on a £250 bike he bought off eBay. He has managed to upgrade to a real racing bike now, although he is still well short of the incredible £10,000 bikes some of his competitors are on. I wondered what position he would have attained had he been racing with his current bike instead of his ‘eBay special.’ He said his current bike and helmet would have given him about a two-and-a-half minute advantage which would have put him in fourth position.

Of course, since then, not only has he upgraded his cycle; after all this training he has upgraded his physique somewhat too.

It will be interesting to see how our local boy does in Holland on 14th April. Let’s cheer him on.