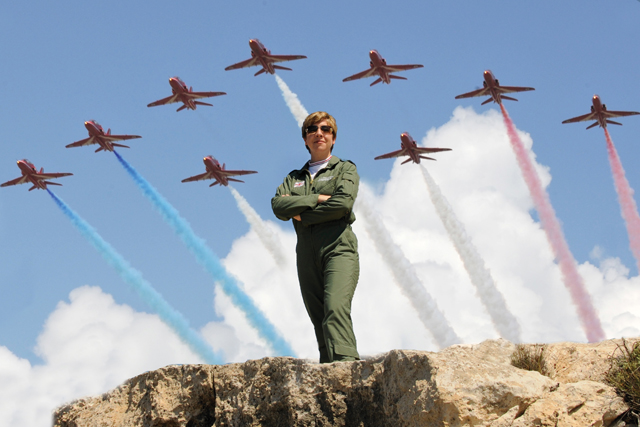 The thrill of watching a Red Arrows display leaves most of us breathless with the skill, accuracy and sheer pace of their synchronised formations and dynamic aerobatics but now meet one of the team who leaves them free to concentrate solely on their performance.
Squadron Leader, Ruth Shackleton is the current Red Arrows team manager, based along with the pilots, engineers and other support staff at RAF Scampton. I met Ruth on base the day after their first outing of the 2013 season, at the Isle of Man TT races. This was the first of eighty-one displays the team will give around the world this year and it is Ruth’s job, behind the scenes, to make sure they are ready to meet the schedule approved by the RAF Events Committee.

Her complex role involves making sure the whole team of 120 pilots, engineers, PR staff, the dye team, logistics staff, photographers and administrator are prepared and in the right place, at the right time, to give their display. Ruth is also responsible for liaising with corporate sponsors and some of the preparations for the Red Arrows anniversary year in 2015.

“My role cannot be compared to anything else in the RAF,” explained Ruth. “I was very pleased to be appointed in September 2012 and for the next three years my time will be consumed by this privileged and fascinating role. I remember being taken as a child to watch the Red Arrows displays as a child and to now be part of this elite squadron is something I could never have imagined.”

Ruth is modest about her achievements and career path to being part of the team whose motto ‘Eclat’ means excellence. Following a short period with a commercial airline, Ruth was commissioned to Cranwell in 1999 and her first post was as an Operations Officer at RAF Northolt. Until 2011, Ruth’s career had taken her all over the UK and abroad. Prior to assuming her current role she was Squadron Leader Operations at RAF Coningsby.

“Although I had to state my interest in joining the team with my desk officer, I was then boarded for the role and shortlisted for interview. It is a unique appointment and I am so lucky to be here,” said Ruth.

Although we might not see the Red Arrows in the Lincolnshire skies every month, they are busy all year round and when she is able Ruth travels with the team to various events. October to December training begins at Scampton as soon as the last display is finished, the Hawks are given an extensive overhaul and some PR activities are undertaken. From January to March, pilot training continues at RAF Scampton and from March to May the team train at RAF Akrotiri, culminating with the award of Public Display Authority. The team train in Cyprus to avoid our unreliable Lincolnshire weather and shortlist the final nine pilots for the following season. May to October is display season and often the team will appear at several events a day. The Red Arrows schedule is carefully managed to mitigate fatigue and ensure that each sortie is planned down to the smallest operational detail so that the highest safety standards are maintained.

I asked Ruth what is the most challenging part of her job and she said without hesitation: “Keeping up with the emails. It is the sheer volume which arrive and they have to be read and dealt with.”

It is hard to believe Ruth has time for interests outside the Squadron but since school in Scotland, when she was a choir leader, Ruth has continued to sing as a mezzo-soprano as her career progressed. While serving a posting in Naples with NATO, Ruth was trained by an Italian soprano, when she learnt about Italian Opera and ‘Belle Canto’. Arriving back in Lincolnshire, David Jackson, Leader of the RAF Waddington Voluntary Band introduced Ruth to Stephen Holloway, a professional bass baritone who performs with the English National Opera. Stephen moved to Lincoln a couple of years ago and is now her tutor.

“Singing is my hobby and I am strictly an amateur but I try to focus on the quality rather than the quantity of my performances. I love to sing, when asked, for friends at weddings and other special occasions and I am very flattered to have been asked to be part of the finale of Anthems in the Park at RAF College Cranwell on 27th July. I will be part of a very patriotic section of the evening and not wanting to give too much away, I have a special dress for the occasion.”

A display by the Red Arrows will also be part of the evening. Ruth will serve as their team manager for three years, working with the whole team at the exacting pace required to appreciate and deliver consistent excellence. Ruth is well on the way to achieving a degree with London City University in Air Transport Management, which may influence her next appointment in the service.

To finish our interview, Ruth took me to the pristine service hanger to see the team’s Hawk jets lined in perfect symmetry ready to give their next display. While the Red Arrows will be flying high over Cranwell for Anthems in the Park, it will be Ruth’s voice that will be soaring through the loudspeakers.