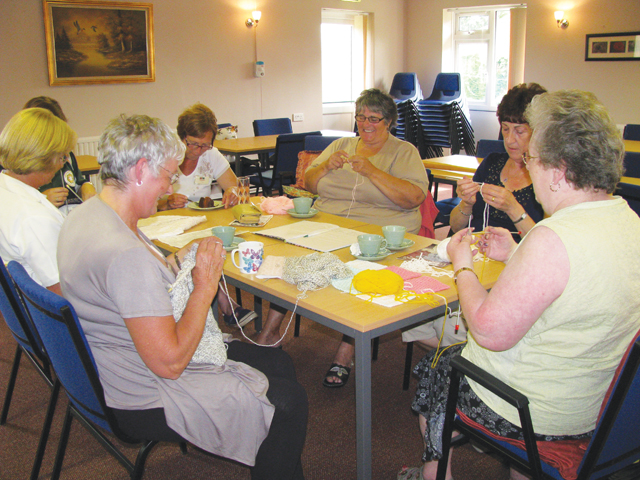 Knitting need no longer be a solitary, home based activity. Jean Rush has been finding out how Lincolnshire knitters get together to make fashion, gifts and even street art.
Knitting is alive and well and flourishing in Lincolnshire, with groups throughout the county sharing their news and views on the internet and at weekly meetings. Their interests cover everything from knitting clothes for charity to making hats to adorn statues, as well as the ultimate in knitting creativity: replicas of Lincolnshire churches. Knitting can now be included as part of a fashion degree, so it seems a revival in knitted garments on the catwalk is just around the corner.

KNIT AND NATTER
This group, set up in Scunthorpe Library a few months ago, has been such a success that similar groups have been started throughout north Lincolnshire in the libraries at Ashton, Barton, Brigg, Park and Riddings. People bring their knitting and crochet projects along and anyone with knitting related problems soon gets them sorted out by other members of the group. People of all ages and abilities, from absolute beginners to those with expert skills, enjoy sharing their ideas. Knitting for grandchildren, crocheting blankets and homemade Christmas gifts are the more usual projects, but some are making hats for premature babies, and the group has recently been contacted by a charity and asked to knit small teddy bears to go in memory boxes for parents who have lost a baby. As for the age range, although mostly mature, the groups include a four-year-old who attends with her mum and does her own knitting, and an eleven-year-old boy who is already a keen knitter.
Libraries are a safe and friendly environment for knitting groups, and a real bonus is the fact that the libraries have bought more books on knitting and crochet, which are flying off the shelves! Look up Knit and Natter on the internet, or for more detailed information contact janet.stopper@northlincs.gov.uk or phone 01724 860161.

SOCIAL KNITWORK
On the third Saturday of each month the Social Knitwork group meets at the Museum of Lincolnshire Life, in Lincoln. It’s an informal drop-in group, where members undertake all sorts of projects from baby clothes to knitting for children in Africa. Numbers attending vary from five to thirty, including some serious designer knitters who are involved in knitting as part of a fashion degree, and ages range from eight to mid- seventies. There is a link between knitwork and community music, with some of the members meeting before the knitting session to play English folk tunes, making a very popular combination. For more information contact Frances Kelly on 01522 560163.

YARNBOMBING
Google Yarnbombing and you’ll be surprised to find a group meeting at Lincoln Drill Hall, on two Saturdays per month, engaged in the most unusual pursuit of knitting hats or even beards to adorn local statues. Believed to have originated in the Netherlands, this non-permanent form of graffiti has spread worldwide. On Wikipedia you will find many examples of this form of street art, including a ‘tree cosy’ in New York and a ‘phonebox cosy’ in London. For more information about the group which meets at Lincoln Drill Hall phone 01522 873891.

WOOLLY SPIRES
One of the most ambitious projects, Woolly Spires, has been undertaken by ArtsNK and launched in 2010. Its aim is to encourage knitting enthusiasts throughout the county to create 3D versions of Lincolnshire’s historic churches, using only the fleece of the rare breed of Lincoln Longwool sheep. This provides a link with the past, when the landowners who funded the churches often became rich on the backs of this iconic breed. One church in each district of Lincolnshire has been earmarked to receive the Woolly Spires treatment, and pioneers of the project were the knitters of Sleaford, who completed their 3D version of St Denys’ church in 2010. Recently completed is Spalding parish church, St. Mary’s and St Nicholas, created by the knitters based at Unique Cottage Studios. St Botolph’s Church in Boston, better known as the Boston Stump, is in the process of being created. Google Woolly Spires to check the project’s progress, and for more information on taking part contact the Woolly Spires project manager, Marion.Sander@leisureconnection.co.uk.

NEW INITIATIVE
Lincolnshire Active Community Network is aiming to start a network of knitting groups all over Lincolnshire and we attended the very first meeting, at Weston Community Centre at the end of August. Organiser, Wilhelmiena had supplied a superb homemade cake for the occasion, and reported that three people had learned how to crochet in the very first lesson! One lady, Maureen Rate, had made 150 squares of knitting, and brought some with her so as to be shown how to crochet them together. The resulting blanket will be donated to a retirement home. Others were busy with baby clothes and there are plans to make clothes for premature babies in the future. Coordinator, Samantha is looking for volunteers to start up knitting groups all over the county, so anyone who has the time or inclination should contact samantha.marshall@lincolnshiresports.co.uk.