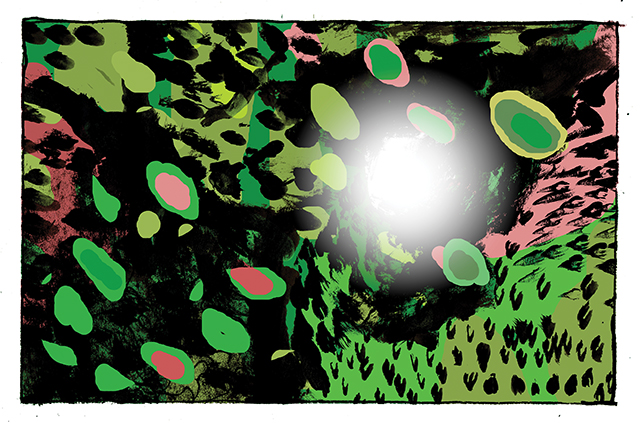 Solvitur ambulando – It is solved by walking – August 2021

Down one of those back lanes is a lone chapel and a named barrow – there’s a detached house – ’80s but with outbuildings that suggest an earlier and larger settlement – the house bears the flag of the state of Alaska: the Plough and Polaris on a Prussian blue field – this, perhaps, is navigation enough – a discreet path through a jungle of nettles, warring creepers and brambles that cascade with thorn and flower. An apple tree grows into a rotten fence – the stile has not been repaired for a long time – the remains of Defra signage circa 2001 – an acre or two of pasture – unexpectedly big oaks, fresh dung, no sight of cattle though – wasps under the great low shadows – trace of earthworks – good.

Into a twist of path that is rutted and puddled – more nettles and clouds of microscopic insects – the distress call of something in the canopy – a tree that has recently collapsed, papery innards filled with ants and fungi – the whole thing is alive with spores – soft enough to sink an arm straight through – there are giant rhubarbs, brackens, a world of moss. It rained hard yesterday – looks like the path acts as a channel – no obvious footfall in the muck, no mountain bike tracks – a harvestman treads gingerly through the underworld – soon the woods will explode with tiny spiders.

An opening – more light – a track – the evidence of lumberjacks – a stack of trunks a hundred metres long, ten trunks high – not new – looks as though they have been hanging around for years – the track is long and straight – wooded both sides – a vanishing point.

The path goes west – into the woods deeper – a single child’s glove has been placed on the point of a stick – a small hand – Peppa Pig, faded but waving.

A gust through the length of the wood sends any gathered raindrops straight down – the briefest turning on of the tap – in deeper – off path now – a dipping – then up suddenly. The map shows an asterism – two stars to the far side of the wood – gothic script – Motte and Bailey – must be it – there’s enough rhododendron to give Henri Rousseau a thrill. There’s a few of these around here – stamps of Norman occupation – little forts strung across the territory from early days of conquest – not much, a ring of stakes, a cabin of earth and wood – a few lads with horses and spears – enough to police the Witham valley and approaches to Lincoln.

A clattering of jackdaws chat from lookouts above – must be young up there, sounds busy – what have they seen? Riders maybe – no, a dog is being called for – can’t make out the name, can’t make out the dog, just the bark – the density of trees does weird things to the sound – flattens the reverb, misdirects. Spears of foxglove stick out through nettles – July is the time for purple flowers – the sudden breaking of a puddle’s surface – the dog shakes dry, still out of sight – big, heavy breaths – dashes off – the voice of children nearby – stick machetes through Lincolnshire rainforest.

A mammal in the ivy up above – the squirrel’s leap is silent – off path, moving through the tangle with needle accuracy – try for a straight line, get dragged into a bog – where are the rare orchids? Research said there may be adders but the soil isn’t sandy enough – Woodhall Spa, Market Rasen, good for adders – stick an ear to the ground as if listening for distant horses – the boughs in the canopy shift as one, the pressure lowering – get a whiff of it – rain some – just through the lime leaves. Feels like another storm is brewing – a woodpigeon is freaking out – light dims – a peal of thunder from horizon to horizon – might be time to find somewhere dry – need pine – no pine – a sense of flash, as if someone has just taken a photograph unexpectedly – thunder, in shorter peals – a rippled sheet of electric across the county – uh oh.

A deep breath before the plunge – rain falling sudden and sharp – those lines in Japanese woodcuts, fellas on bridges caught in the squall – arrow rain – this would normally be a good point to find a dry spot, maybe do some noodles on a stove – it’s pointless – every drop hammers to earth – might as well enjoy it. The cacophony reaches a white noise pitch – proper static, shortwave fathoms – somehow, through the megahertz, a woodpecker goes about his business – the different tone sticks out – morse in the rain – more thunder, the flashes are away, moved off toward the midlands, the pressure changes, humid, the insects return to flight.

Ruts in the track are full of reflections, vapours, skaters – further ahead a pool has established and on close inspection it is a harbour for myriad newts and wrigglers – there are tiny eyes looking up through the murk – a harvestman moves across the surface of the water.

On – stung, thorned, wet – a stump makes for a good position to evaluate the situation/have a sandwich – the plan was to cover more miles, but it’s good in the woods in a storm – go south, then east, the sun out full and high, shadows cast along a wide chalk track.

Back by the log pile – the sun out again – a couple dressed in country clothing walk in spotless green wellies behind a selection of giddy dogs. Keep moving – there’s a riddle of tracks to cross yet – cutting through Dead Man’s Holt – a muntjac hollers and a tree has fallen and the nettles barricade what remains of the path – on – over – out – there are green fields swaying – a lone chestnut tree still dripping. Trudge on until a church comes into view, just a gable end, dedicated to an early saint – over the southern sky another thunderhead begins to eclipse the sun – the pressure drops – onward.