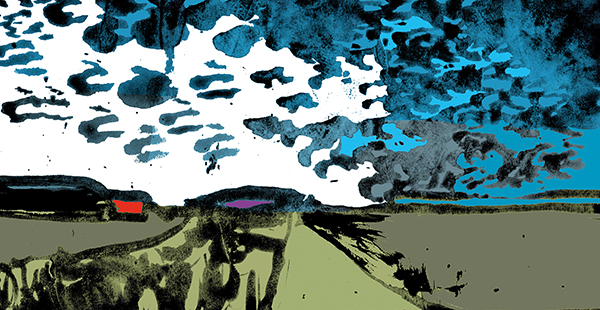 Solvitur ambulando – It is solved by walking – May 2022

There are people dressed for beer gardens despite the snows of last week – full tilt into springtime then – there are lambs in the fields and deals on lamb chops in all the supermarkets – those leaves you like are back in style and the horse chestnuts approach inflorescence.

There’s a mock sun forming on high – a trick of the light, just ice in the stratosphere – a white dog thunders over young nettles – there’s glass on the path – the traces of a fire, pop cans and foil – attempted camping – dirty little goblins.

Bin bag it up – half a garden sack – the blackthorn is a wonder but in the hollows below are gullies of lost balls and melted plastics – a thorn pulls on jacket strands opening a rip – nature is chaotic today.

Jackdaws with split wings cawing – a voice calling for a dog – late frost in corners where the sun doesn’t touch – the dog rolls in something delicious and bounds away to the unseen owner who curses at the task ahead – jackdaws, pigeons.

A blackness passes to the south – squall hitting way out toward the turbines and there are sun bolts in phalanx pouring out in the direction of the coast – stellar debris – a gull hoard against blue slate and green – in the razor wire defences of the powerline are the shivering ghosts of party balloons.

On – golf course, garden centre, roundabout, woods, big green fields leading to battery farms – the way ahead cutting over a main road toward the sea – the bus shelter has been built with the wind in mind – leaning away from the westerlies. Step in – no info – on.

Paths south east – two mounds a mile or so apart, largely hidden by trees and landscape – there’s not much to go on – local names, the odd reference – two castles of earth and wood – forts, outposts from the years directly after the conquest – keeping watch on the marshes and the comings and goings along the Great Eau – all this was swamp and weirdness a thousand years ago – levels and islets – hamlets accessible by wood tracks established before memory – reeds, murk – perhaps you have seen Somerset when it floods, you’ll have an idea.

The first blooming of the oilseed – look – the first butterfly of the year – a magnolia tree in the garden of a red house – shining blossom on a hard blue sky – a horse in a blue overcoat – outskirting a larger village – path to the back of the church – path behind the swings – glass and pop cans, signs of burnt offerings and dirty little goblins – another brick bus shelter leaning out of the wind – a sudden gust of hail – pull in for a moment – oh – no bus information but a quantity of anti-vax scribble – the paint is new – urgh – those goblins are everywhere it seems.

The village has one of those Methodist chapels, a small war memorial, the derelict forecourt of an empty petrol station, a garden of gnomes – there was a shop, a good little shop – the kind of place you could expect a reasonable local pasty, a can of cash and carry pop – we were working in the churchyard here on the day Syd Barrett died, drinking dandelion and burdock with the van doors open – it was a green, hot day – the shop has gone now.

A bus from Skeg brushes the hanging branches at the edge of the village – an old woman gets off with plastic bags – there’s a path that cuts back down the old railway lines – shining blossom – ahead – four walkers, bright cagoules – red, blue, yellow, blue. Since the Weirdness, flocks of walkers have been a rare sight – an exchange of greetings at the passing place – turns out they are plotting one of the Slow Ways (look it up) – one of them shows me their map – different colour highlights on familiar routes – bright pink for today’s journey – one of the walkers carries a pilgrim staff – a holly stick about four foot – a Will Parsons – the Rolls Royce of sticks – nods of approval – a puppy in the fold of the yellow cagoule – the puppy is called Jasper.

The hedges are in chaos – must be a good year for the birds – an explosion in the pigeon population – once you tune into the sound you realise how big it is – a million pigeons purring into a great ambient hum. Those squalls have cleared off – it’s clearing – the sun is warm out of the breeze – a mile or so on – the remains of a railway signal pole, drowning in thorns and nettles – bricks and mortar under the mass of tangles. The track is damp – covered in prints – mostly deer – where there are embankments there are signs of rabbits and badgers – old railway lines make incredible habitats – sometimes it’s okay not to be so well connected – a bunch of magpies tussle for supremacy until a big rook moves in and the magpies quit it – big rook barks over the line and blossom.

Traffic close – an unofficial way for a mile – depends which map you read as to the rights of way – 1888 edition says it’s peachy – you’ll come close to the mound of another earthen castle and a gritstone church dedicated to one of the post Roman saints. Try the door – locked and hasn’t been tried for years – damp smell, damp place – best left to time and ghosts – on – someone out fishing on the Eau in full fishing regalia as though he were on a birthday card. In the sunlight there are insects gathering – a jet fighter shrieks north east – starlings pulse towards the battery farm – the squalls are out to sea, harmless blue smears on the horizon – on – road a little – bus shelter – perfect – a brick job, leaning away from the wind – step in – ah – bus info – good – eighteen minutes – that’ll do. A sudden darkness from the south – hail, then sunlight until the bus arrives bang on time.