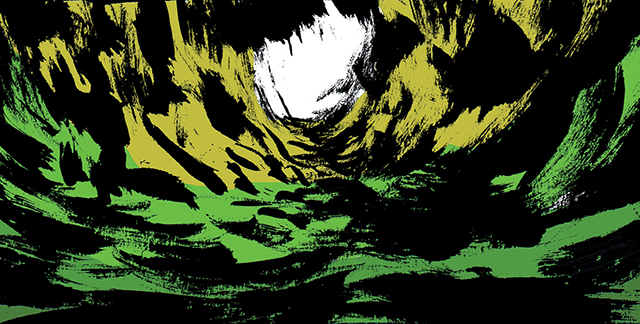 The sun is an hour away – the peaks of the Wolds are islands – if you’ve ever seen it, you’ll know – the three red beacons of Belmont mast and the hum of early traffic – jackdaws, trees beginning to reveal their limbs – every ripple and depth in the hills radiates vapours – the breath of chalk, lifting.

Onwards – it’ll be warm later – maybe even hot – the last heat of the year – these October mornings are best – perfect walking weather – a short path through tress – the sensation of passing through stray lines of spider’s silk – Binbrook is out there somewhere – Orion fading on the eastern horizon.

Head on – head in – a walk without mission – major phase of ambient autumn – see what happens.

The geese are back – formations passed in the night – try and count, 200, maybe – probably more – a great straggly wedge over the old airbase – shadows across the wing of an English Electric Lightning – a bread lorry thrashes up the lane – the picture on the side of toast and shining butter.

The mist is still rising and moving quick to the east – cattle grumble, a metal gate opens, shrieks, closes – it’s a bucolic vision, sure – conjuring memories of a false past – huh – that chocolate box vision of England, all ruddy faced farmers and foaming nut-brown ale – a fuel truck with red livery has taken a shortcut across the hills and heads in the direction of the A18 – the driver waves.

North – a steep climb – the Humber reveals herself – the mist pouring toward the sea and channelling many colours – there’s a flame that burns from a tower at Immingham – the bridleway cuts through a long plantation of pines – it’s dark and spongy underfoot – feels hollow – there’s a rank ditch to the right – a foot of black liquor and decay – smells ancient – you’d not want to slip in – a kind of stink that would linger on skin and corrode boots.

Footprints lead off the right of way – fresh looking – a little way in – huh – a boulder – an erratic bluestone that rode with the ice in the time of the last glacial maximum – there are a few on this bit of the hills – the last remnants of a mountain range that had eroded when the earth was still an infant. Someone has had a fire here – they’ve tidied up, but there’s ash, scattered and tell-tale charcoal – a wild camper perhaps – sometimes the erratics turn up on maps – gothic script, ‘ Druids Stone’, that sort of thing. Looks like this wood is good for fungi too – shaggy inks, toadstools, neon lesions and liberty caps – it is dank and windless – the air must carry billions of spores – there are probably elves – you should carry a hagstone or two.

On a bit – the path keeps going – mist still building – the east is obscured – weird light – the path gets wetter underfoot – deep ruts holding the remains of last week’s storms – try walking in between – it’s slick, slippery and gently downhill. Someone must have been this way – more footprints – some old brick in the ruts – other prints – cloven hooves with a tiny stride – muntjac probably – shrieking micro deer with an alarming leap that have thrived in Lincolnshire since being imported from Asia in the 19th century. It has been said the muntjac were introduced by the owners of a middling country house – big enough to impress but lacking acres of parkland – muntjac were added as living scale models to create an illusion of perspective – small, far away.

More brick and rubble binding the path, trees mixing now, pine, ash, birch – a black and ruby pheasant feather – brighter above the canopy – blue, grey, orange, yellow – a little ditch with a crude bridge of timber wrapped in chicken wire and beyond that a tripod of 2×4 supporting a plastic feed barrel – those are usually good enough indicators that one should keep away.

The path turns at a tangle of brambles – all the remaining fruit is covered in ashen fungus – wasps are feasting – just over the brambles in an apple tree of some remark – the thorns of the blackberry have fashioned a perfect redoubt around the apples – there are tunnels through the thick of it big enough for a small child to pass through. There must be a great many apples beyond – the smell – a perfect smell – old apples on a mid-autumn morning – the slight edge of fermentation – an old smell – somewhere between sweetness and decay. Three strides on – ah – the badger’s cadaver is host to a million ants – it’s been here a while – ribs showing through receding fur – wasps, drunk on old apple, mingle on the sockets.

Look – something is on the move. Listen – an engine ticking over – the clunk of a door shutting. Woodsmoke – on a bit – up a bit – the smoke is coming from over there – voices – lines strung up, tarps – three flavours of camouflage – Disruptive Pattern Material, something eastern European, something from the back of a fishing magazine. Three figures over a tiny, hot fire in three different camo jackets – a pan is being tended to – bacon, sausage – low, morning chunter – just through the trees are a couple of 4x4s tucking under the ley of the tree’s edge – an air that their expedition is unofficial – one of the fellas hears something from the east side of the wood – and they all move with quiet urgency – it seems breakfast can wait – I call out –

They can’t see – one fella answers

Leave them to it – maybe they finished the sausage. On – there’s a fence – mesh topped with barbs, angled in – long shed, single storey – security lamps – pass – more pine – to the left – ash to the right, thinning out – the mist has cleared – it’s bright somewhere – a spider has made a considerable web that glistens in the day, there are tiny flies already caught and mummified. Close inspection – there’s an egg sack that will soon erupt – the smell is somewhere between sweetness and decay – the spider is still, tense – a bunch of crows break the quiet – the spider vanishes.