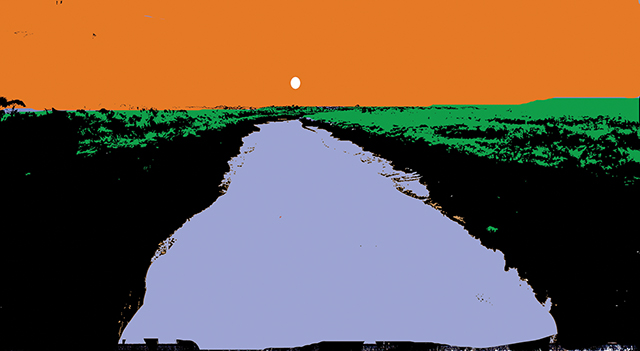 The objective was sunrise – the overnight forecast said the sky should be clear – full of constellations and satellites – a trace of the Milky Way over the chug of nocturnal shipping and dormant caravan parks followed, perhaps, by a red, red morning and something eggy on the camping stove.

A murk came in at 0515 – a fret from the east that muted the sun to almost silence – just a pale 5p coin rolling up beyond layers of fog – the yolk simmered in the tiny pan – huh – change of plan – head west – keep the sun to the left until it collapses into the next horizon.

West – walking through Saltfleetby is easy enough – dykes full of lime algae – red brick detached bungalows with honesty boxes of jam (damson, blackberry, various crude chutney). There was a good little shop – kind of place you could get Polish lager, rare maize snacks and reasonably priced sausage rolls – the shop has gone now – a dog runs up to the gate and barks hello – a face appears at the window with net curtains – walk on.

West – the murk has mostly burned off – warm already and will get hot later. Walking along the road to Manby – a tree across the field holds a tatty flag of plastic and there is a sinister bunch of battery sheds – a turbine ticks over – at Manby, a plot of new builds named after a local girl who died tragically – a supermarket delivery fella explains the replacements to a bald man in a beige sweater.

West – the hills begin and there is already quite a sweat on – golfers on the golf course with the air of Regency fops – some of the best footpaths in Lincolnshire cross golf courses – there was a nice chap on a lawnmower who was kind enough to refill two water bottles.

West – the great fields of the eastern Wolds are cut and raked with bales – fortification of hay – it’s the best time of year to see the parch marks – stains in the soil that give glimpses into an earlier narrative of this place – near Tathwell, not far from the barrows, a villa stood – there are detectorists in other fields. The sun is full now, hot – most of the summer birds are already on the wing in Africa.

West – on chalk uplands and through Tennyson’s backyard – the sun nearly at zenith – forearms feeling it – dunked a neckerchief into the brook and took a long draught in the shade – free courgettes outside a cottage near Bag End – butterflies, sunflowers – a car heads along the lane – a couple, 40ish, smiling, very much in love.

West – hazing over – someone left the oven door open – jets out of Coningsby – a foil wrapped cheese sandwich on the edge of Horncastle – junk shop as museum/ art installation – house of the hangman – passing pubs, but not stopping – the smell of boiled potatoes from an open window – lingering in the air conditioning of the petrol station and purchasing a basic ice lolly – man in BMW on the phone, will be at head office by 2 – he sips a Vimto.

West – flattening out towards Martin – old railway path – mile markers shaped as Vikings (I made them, a long time ago) – cyclists, dog walkers and children – shade – a woman on oxygen trundles along – sunlight full – flies and dust – Woodhall Spa is busy with cake eaters and folk on other quaint jollies – the soil is sandy, fine – a strange place, in the pines – various mock Tudor decorations – conservatory at the nursing home, full of dozing elderly residents – numerous references to 617 squadron – the granite dam (my father cut every letter) has wreaths beneath it.

West – up river – the towers of Lincoln ripple in the shimmer of the day’s heat – flat ahead, almost a mirage – the cathedral wobbles – a small craft idles east – old bloke in a little cap, eating an apple – the boat is called Elsie Marie – he is tuned into local radio – hits and memories – Cyndie Lauper bounces across the surface of the water – steel pipes at the back of a farm track – a way to avoid the bulk of the city, dodge the ring road.

West – the ruby needle of Bomber Command Centre casts a long shadow over the various commons and battlefields – jackdaws wait for traffic to ease before landing on the carrion – at the roundabout, two men shout and use rude hand shapes – some minor vehicle based afront has unlocked barely hidden rage – honks, shouting – Leave it, Gary – jackdaws seize the opportunity – punches are thrown – jackdaws feast.

West – the Sunday evening before the school return – washing lines of uniforms – a lull – the sun bouncing off vapour trails – a family sit in the front garden of a typical ’60s council house and are enjoying themselves greatly – there is a paddling pool and sausages are being sizzled – Steam Court, North Hykeham – out towards the lakes – the road hum muted – the sun in the treeline now, just crashing the canopy – two women jog in bright colours – a young father walks a toddler and she clutches at a stuffed version of Olaf the Snowman – a dog barks and leaps into the water after a yellow ball.

West – a train not far away – from Newark direction – signal light on the track – the boom bip of the passing horn – the haze of the horizon is turning the sun redder than red – descending the trees visibly now – with a careful eye you can see the world turning. Brambles full of cobwebs and fat spiders and late fruit – all the silk is glowing – there’s a corridor of pylons that disappear beyond the Trent head into Nottinghamshire – a fat woodpigeon purrs on a rooftop.

Look – back east – already the brighter stars emerge over the sea and our sun passes beyond visibility – the sky turns to oranges and greens – civil twilight passes – that haze is turning to mist – the river will bring the murk back in. Look – east – Jupiter rises and points the direction home.