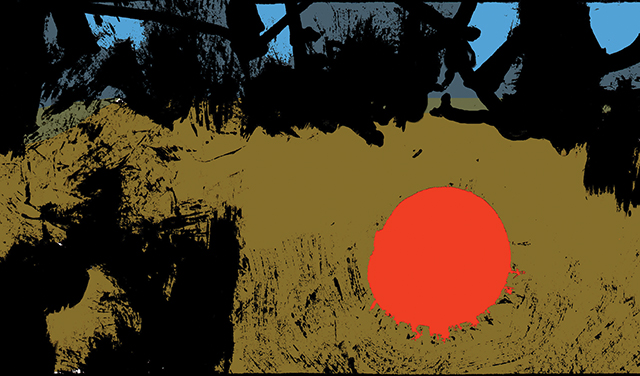 Solvitur ambulando – It is solved by walking – September 2021

A recurring memory – night time runs into the western Wolds – young, 17, 18 and giddy – a dirty red Volvo over the Bluestone Heath Road with directions to some party in a quarry – cars parked up at Salmonby rocks, a £10 tent from Millets – a lad from Horncastle with a generator and a PA that used to belong to a bassist from a later lineup of The Groundhogs.

Twenty years later – now – no one comes out this way much after hours – certainly no signs of teenage kicks – the ashes from past fires have fed the thistles. It’s grey, spots of drizzle – rain overnight has left the surface of the chalk full of hazards.

Knees are already filthy – bloody shins from an earlier battle through tangles – up and over. Looking down into the pit, there are loads of these little quarries on the Wolds – there’s a tiny one near the haunted houses of Muckton that has become a green cave and over near Tetford a vast one – properly lunar enough to resemble some Dalek landscape of the ’70s – older lads with better sound systems played jungle there – converted ice cream vans from the west country, one massive dreadlock.

A tractor rumbles down the nearest lane – he’s pushing on up the hill – harvest time – the green cab popping over the top of the hedge – a U-boat in the waves.

Up the chalk – there’s a hole and signs of life – take a whiff – it smells warm, lived in – scramble up a bit more – a view – there’s a glittering river of traffic on the big roads miles away – east to west, west to east – a migration to and from the coast – it’ll be mayhem at Skeg this year, everyone playing catch-up – fair enough.

Up top – it’s grey, heavy – the sun shining in bolts towards Lincoln – that tractor is rigged up to a baler now and laying eggs of hay – those mysterious Paul Nash paintings. I’ve a pork pie and a can of cider in my rucksack – mmm cylinders – no picnic time – over the back of the quarry is a field of glowing wildflowers and the hill falls away in a style that is not local – more akin to downland – meadow – yellow rattle, field scabious, betonies, common knapweed – a lone dragonfly of great size coming in low – it is quietly amazing – a fragile constellation. There are other plants not to be named – rare as hen’s teeth, secret, protected – an index of grasses – slow, careful steps. A moth lands, departs – get down – all fours if required – look: a field from a snail’s point of view – among the stems are heaving arachnid egg sacks and ants – the gangly weirdness of Opiliones. The earth is chalky, a fossilised seabed – there’s a book, Soils of Lincolnshire Volume III, worth digging up. Something drones above – single prop maybe – not old – that dragonfly is back – enormous – way above, a flight to the Americas and a swift – over in that field the baler continues laying.

The next field over is waiting on the blades – barley due for the Midland breweries – a public footpath passes that way, the line slightly curved, coming out at an ash, over there – crows in crude black letters over the ochre – Vincent in Arles. It has gotten heavier – humid, thick – thunderflies on a pale t-shirt – the ground is broken – the recent heatwave yet to properly give way – clay and chalk receding – yesterday’s rain couldn’t quench it – roots beginning to show – on – looping back around toward the far rim of the excavations – an ancient trough – blood red with rust – the cold water is appealing, the scent less so.

There used to be danger signs at the edge of the quarry – a couple of stumpy, rotten posts stick out of a vast bank of nettles – nettles that tumble down what was once the working face – you could hurt yourself doubly, if you tripped. We used to loon about up here, half cut in the dark – there was the chassis of some old truck in a collapsed shed – always imagined this place was like Hell Drivers – truck’s gone, the shed vanished – is that Japanese knotweed? The seeds from the constellation of wildflowers have spread – with a stick of hazel, poking about at where I thought things used to be. Huh – in the dirt – a ring pull – one of those old ones that you peeled off – and not far from that, a tiny fragment of china – blue and white – little more than a splinter – a cup dropped a hundred years ago, maybe – my mother would have known.

There’s a steady pulse from farm machinery – and underlayer of ambient pigeon noise – a few spots of drizzle that don’t deliver.

There’s an apple tree already looking heavy, already lost a few fruit – a few wasps at shin height – reach over into the bramble mass – maybe it’s a bit early but some of the higher ones look good – pick the juiciest, the darkest and the deepest – red stained fingers – the taste is explosive – sour beyond reason – acidic, fiery – rather good actually, but not crumble ready – pick another – roulette – worse – bitter, hard – one more – it tastes of autumn.

The tractor is back on the lane – dusty, rumbling – time for that pie and that can – the pie is a little battered from the rucksack – a scattering of pastry for whatever beast finds it – the can froths open with a hiss – we got through a lot when we were 17, 18 – the sweet, metallic apple taste washes away any remaining bitterness from the blackberries and complements the savoury heft of the pork – the tractor passes, the driver waves.

Trudge on – westward – it’s brighter that way and the plan was to be beyond Horncastle by teatime – the path crosses a green lane – a car of lads passes – 17, 18 – music too loud, driving too fast – the lad in the back has a slab of cans in his lap – same as it ever was – good.