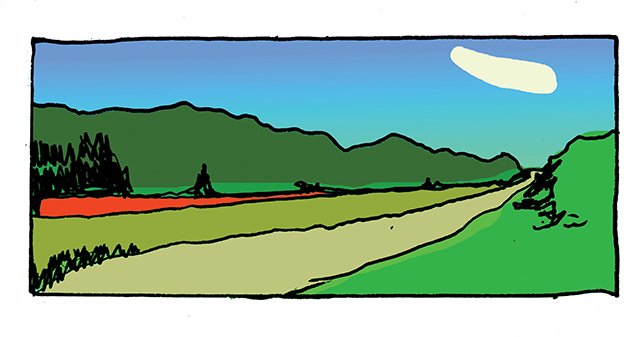 Sticks and things present themselves – I’ve a Dutch kitbag kept to hand for stashing finds in – there’s a node of flint lurking in there that bears the complexion of Ganymede – not for knapping, too pretty. I have a knack for bringing home wood that is far too interesting to burn – knots of root that have grown into fists around bones of chalk, driftwood stumps that sit in the nettles by the fire pit with the weight of ancient crowns – I’m part magpie.

I’m out east, looking for wood and other objects – a wet May buckles into a steaming June – mare’s tail skies in the morning, thunderheads by teatime – swifts in full action now, circling and reeling. The year rushes into midsummer – the cow parsley is up, tiny slugs and new snails – there’s a tractor spraying something in the next field – sloshing tanks of something rum. The path goes that way – I double back – a magpie clacking with the voice of a toy gun – something gleaming out of the dirt – a quick poke reveals half a glass insulator – no powerlines about – huh. I’d keep it – the shape is good, elegant, slightly art deco – but the broken edge is still fresh, lightning sharp. I put it back and work the dust over it again as though it had never been excavated. Crossing an A road to a church to fill up a flask of water, caravans rumble away – must be changeover day, half-term ending – back to Midland towns, maybe back next weekend, nice to, now y’can.

On the back fields towards the inevitable sea where the prison camp stood – a concrete track losing the battle with buddleia cuts east with dyke to dune – a vortex of midges going up for green surfaced water – no ripples – away the way I came, an ice cream van – tune playing, Greensleeves in 8-bit – one for the hauntologists – maybe he’s off to the car boot – I’ve got to be there by noon – we’ll see – the tune turns to Yankee Doodle then fades as I hit sand.

There’s no one about – good – I head out – I’ve no use for blue rope but pick it up, better to bin it – the driftwood score is good – I’m after the really dry stuff, bleached, shapely – there’s a length of pine, warped by salt and heat that has the look of a tusk – hmm, pick it up later. Plenty of sea coal about – the usual oyster shells and razor clams – worn planks are keepers – a heat haze to the north – Spurn ripples in the distortion.

At first it looks like plastic – white, sandblasted – closer – a natural curve – a slight twist like the blade of a propeller. A quick boot tap – it comes free – it’s heavy, not quite a kilo – no sign of flesh or sinew – this has been out of body for some time. I pick the bone up – not seal, seal is fairly common around here – bigger. Trying to read the shape of the bone – could be from part of a flipper – something heavy, something big. I take a few photographs on my phone and check around for any more bits – nothing – a gull’s feather.

It’s hot – time to head on, head in – neck that water. I double back – dog walkers with loud sons head in the direction of the tide bell – a tennis ball is launched, the dog in pursuit –
There’s a shack in the dunes – a driftwood thing, similar to the one up at Humberston – a relative of a den. Logs and timbers have been written on – hearts and initials, names of the deceased – one instance of Live, Love, Life – the shack popped up during the lockdowns. I sit inside, chug a flask of water and send a photograph of the bone to a friend of mine who has knowledge in this area.

A man walks by with a giddy Collie – the dog comes to say hello and gets his rightful fuss – the bloke stops for a smoke and a chat – says the shack has become a bit of a beacon, how folk have had their ashes scattered here, how people light candles in jars at night. The dog eyes the bone in my hand, gives it a sniff, then slinks off to the edge of a wide and brackish puddle, his ball floats toward him. The bloke’s attention turns to the bone – not seal, dolphin maybe – too big, too heavy. He feels the weight – “Bloody hell, that is heavy.” Downwind the tide bell ringing. “You’d need some muscle to have bone like that.” My phone pings, the knowledgeable friend – message reads: ‘Certainly cetacean, humerus possibly ulna.’ Huh, whale bone – another message pings through: ‘It’s old.’

Me and the bloke have a marvel at the humerus – they wash up occasionally – the council carts them off to landfill. This thing has spent time in the sea – alright Ahab. The dog barks again – one of those high-pitched pleading barks – play time – and the bloke and the dog are off – he launches a ball – the range is impressive, the dog is fast.

I trudge back, sack of driftwood and whalebone – there’s a car boot sale to find. Poppies are up now, orange and crimson – the oilseed is less intense and soon enough the barley will shift into ochre – another message pings through, someone else – a stonemason on the downs: ‘Can you send me one of your finds, something natural but unexpected?’ I have just the thing. Greensleeves in tinny 8-bit drifts across the meadows.

Later – 30 odd stalls set up in the sun, that ice cream van in one corner – despite nearly two years of car boot hiatus, the goods remain largely the same – a few toys, paperbacks, tools, the obligatory unused foot spa, mirrors that have seen things, a kitsch print of St Brendan the Navigator… It’s nice though, just browsing, having a good look. My wife comes into view with the boys – “Got you a present” – she hands me a copy of Moby Dick and I pull the whalebone from my rucksack.