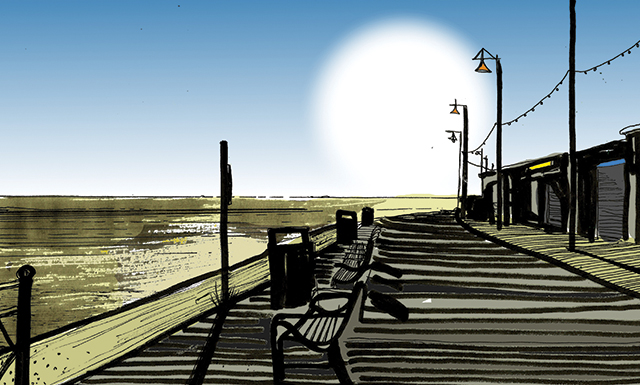 The Lincolnshire coast in winter can be a bleak prospect, says Maxim Griffin. Walk 12: 1st February 2018 – clear blue sky, turning.
Far away from summer and the hustle and colour of the holiday season, the seaside resorts can appear as lonesome outposts that cling to the memories of a golden August – this does not have to be the case. Everywhere is always interesting. And the coast from Mablethorpe to Skegness is fascinating…

I hit the ground at a pace. Market day in Mabo – there’s a fellow selling homemade onion bhajis and one of those lorries where the side opens to reveal a mobile butcher. It’s early and the arcades are yet to open. Small dogs are being walked by the retired and collars are turned up against the breeze – fresh westerly air. I climb up to the prom. The promenade here goes on for miles, down to Sandilands, an easy walk. I’d hoped one of the cafes would be open but it’s too early for them – shame, a coffee wouldn’t go amiss. Onwards then, south.

It’s surprising how many people are about. Dog walkers and joggers, old ladies pulling trollies to town. Everyone is chirpy and full of good mornings and remarks on the weather. I keep lifting my hand to block the sun, bright as it is – past a few shuttered eateries and a ghost train (not operational), I love the signs. Belgian waffles are popular. Offers on meal deals. All day breakfasts – served til 2pm. Coffee and pop. The tide is getting low and I keep half an eye on the waves, might see a seal or two.

A well wrapped gentleman throws a tennis ball for two happy terriers. Gulls and crows picking at wet sand. No trace of litter or debris, just the sun reflecting off a few beached jellyfish.

Chalets. At least 300 between Mablethorpe and Sandilands. Each one is different, variations in decoration and states of repair – some used as winter roosts for starlings. They will be more or less undisturbed there until spring, time enough for eggs to hatch and chicks to fledge. Tuffs of marram grass grow through every fissure in the concrete. Murals and nameplates, homemade art – some jolly, some brilliantly vulgar. Cartoon characters – Hi SpongeBob! Weird names along the lines of Dunroamin’, WhyWorrie, WE’RNUTS. The local Girl Guides group keeps a chalet down here too – can’t say I blame them – a bolt hole to brew tea and watch the water. Chalets are interesting from an architectural point too. Differing styles of roof – Dutch influence, Japanese too – curves and angles. And rust and peeling paint. Those fascinating areas of dilapidated abstraction. Layers of colour reveal previous liveries, the palettes of previous owners. Repairs to blue paintwork in white like seagulls – ocean worn metal work, painted locks with lost keys.

Off in the North Sea, wind farms on the submerged hills of Doggerland. Beyond the railings, Miami Beach Trusthorpe, ranks of static caravans, dormant playgrounds, bungalows huddle.

Time to get on the sand. I bound down onto the sand and change into my wellies. The only other figure on the beach is a big lad in an orange coat, barefoot – Good.

To the south, such a brightness it is hard to look – light and the movement. I reach the water and look north – slate grey sky blowing overland to sea, coming this way. I’ve walked seven miles without thinking about it. Huttoft and Anderby Creek are ahead.

Turning into the wind, like the sandblaster I used to operate – the turning weather making me laugh in exhilaration. I’ve got to double back; rain and hail are whipping up. Back on the prom, strings of bulbs rattle and flex and I stop briefly to check out the war memorial at Sutton on Sea. I had a hand in repairing it back in 2005.

Leaning into the weather, striking up conversation with a chap as we walk in the same direction, He’d come to scatter the ashes of a dog, Patch. Patch loved the beach. In the squall, a horse and rider gallop south on the wind.

Five minutes’ shelter in a concrete pagoda and another conversation – she’s lost her carer, so we walk back towards Mablethorpe keeping an eye out. The companion is found soon enough – tea is offered but there is a bus to catch. I plough on, missing the bus by moments – no matter. An extra hour. Pulling my waterproof around me, heading north this time, back on the beach by the minigolf folly of a pirate ship and a curious garden of plastic animals, a donation box for the seal sanctuary – a handful of coins given.

Normally, I’d find a place to make some soup or similar, but the weather is too much now – sleet sideways. Letting the wind catch me, I walk out to the sea again – those loose rivers of sand howling around my boots and spray from the water misting my glasses. Looking back to land – nothing moves. An umbrella is turned inside out, even the gulls can’t hack it. All windows steamed by more sensible people, the faint trace of chip fat, the bored voice of a bingo caller, a poster advertising an audience with a healer, a sandwich board with red chalk – Tarot reading, Guardian angels…

Not enough time to grab a drink or a bite to eat, I huddle into a nook and watch the sea spiral and fury. Such energy, it’s thrilling. Patterns in the waves, land being gradually blown east.

Through the murk, the familiar roar of attack craft heading to Donna Nook.

The market is still in full swing, bags of meat dispensed from the side of a lorry. At the bus stop, a man from the Sally Army is heading to Skegness – I shake the rain off me and climb aboard.