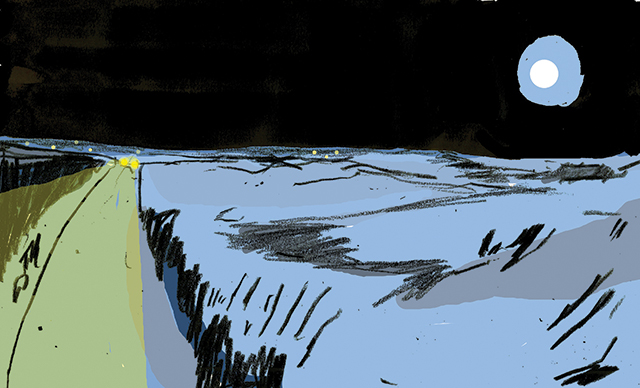 5th & 6th June 2018 – between night and dawn, by Maxim Griffin.
East of the A1, just after sunset. Approaching midsummer, the nights are short, perhaps only five hours of darkness – enough to cover silent progress. I move quickly and quietly above the Witham and Brant valley, towards Lincoln – this is a walk for listening.

I follow a good length of track along old Ermine Street, skirting past villages I’m not overly familiar with. When walking through the night one should take care not to disturb or encourage curtains to twitch. Pausing to browse churches is out of the question, though it is worth noting that in the south of England there are schemes to encourage respectful night visitations and even subtle camping in churches and churchyards – those old rites of hospitality afforded to pilgrims are being gently promoted. A good thing.

Venus rises out of the true west – clear and bright – a nightingale in the tree line. At a distant house, bulbs are switched off. I can still hear the trace of vehicles along the roads – the hum of engines and tarmac carries for many miles. Beyond the rivers a low bank of cloud is lit with a stream of yellow light – and above, two vapour trails high enough to reflect the gone daylight back towards night. The gloaming turns to overcast then shadowy. I stop to adjust my sight. Birdsong slows to a clockwork burr.

TE Lawrence used to knock around here in his post-Arabia days at Cranwell. I dare say he cycled this way. He mentions the area a little in his letters from the time. He was a strange fellow, deeply uncomfortable with his part in the desert war, its aftermath and the mythology that the press had fashioned around him. He ditched his name, becoming Ross, then Shaw, constantly manoeuvring himself away from his past. He wrote a strange book covering his time in Lincolnshire – The Mint – it’s worth a read if you can find a copy. I once pulled an early edition out of a skip in Market Rasen…

A dog fox – that piercing half-bark, half-scream raising the hairs on my neck a little – as I make way past the preceptory tower at Temple Bruer. Lawrence must have come here, archaeology being his early career. He made a survey of Crusader castles at the age of 19, on foot across the Middle East – having an important Templar site on his Cranwell doorstep must have merited at least one visit.

There’s a fantastic account of an earlier investigation into Temple Bruer by the Rev Dr George Oliver (himself an interesting fellow), which reads very much like the beginning of an MR James story:

‘I would describe the caverns of Temple Bruer, when I excavated in 1833…

‘Some of the vaults were appropriated to a purpose that is too revolting to allude to. In one of them a niche or cell was discovered which had been neatly walled up; and within it the skeleton of a man, who appears to have died in a sitting posture, for his head and arms were found hanging between his legs, and the back bowed forward. Immurement was not an uncommon punishment in these places; and an instance of it was discovered a century ago, in one of the walls at Thornton Abbey. Another skeleton of an aged man was found in these dungeons, with only a tooth in his head. His body seems to have been thrown down, as if from a trap door; for he lay doubled up; and in the fore part of his skull were two holes which had evidently been produced by violence.’ (From A Selection of Papers relative to the County of Lincoln, read before the Lincolnshire Topographical Society, 1841,1842. Lincoln 1843 pp.82-3.)

It’s dark and the farmhouse is next door. I’m not about to go nosing about rum towers by torchlight. Not this night anyway.

All sky reflected light leads to Lincoln – brightness from ring roads, industrial estates, petrol stations and suburbs – the ebbing pulse of traffic as night deepens – or doesn’t, at this time of year. 3:30am and the first hint of dawn comes from the east – the slow reveal of day – too cloudy now for a proper sunrise, so I find a spot near pylons for a brew. The birds begin as something takes off from Waddington way. There’s a recording made in May 1942, of nightingales next to a Surrey bomber station as Wellingtons taxi and depart. Lincolnshire must have sounded the same – summer night falling as Merlin engines get to work – given the proximity of so many airbases in this part of Lincolnshire – the sheer weight of sound is quite difficult to fathom.

Turning east with the first glimmer of the day – it’s overcast, flat grey turning to a hanging blue. Looking at the map by torchlight to get my bearings I note obstacles ahead: a train line and beyond that the Witham to cross. There are two possible crossing points: north to Bardney or straight on towards Martin Dales and Woodhall Spa. I choose the latter and make for Timberland Delph – across the river towards Coningsby, lights from the airbase illuminate the pre-dawn.

Across the plain, crows over a barn, bats around telegraph posts. Coming day brings the song back – the clockwork yawn of countless birds waking. I stop to listen and suddenly feel the efforts of the night catch up with me. Crossing the Witham and following the path south I locate a copse of birch and pine, undergrowth more than sufficient to nestle in for a couple of hours.

Rolling out an old canvas bivvy bag behind the nettles, I lie as the colour returns to the sky and the birds enter full voice of a June morning. I’ve passed through the night without disturbing the resting population, without human encounter, without uttering a word. Further east, the sun is rising, there’s a blush to the clouds and I sleep, dreamless.

Maxim Griffin is currently seeking supporters for the publication of Field Notes, a special 128-page hardback book of his illustrations and writings. For more information visit the campaign page online at unbound.com/books/field-notes