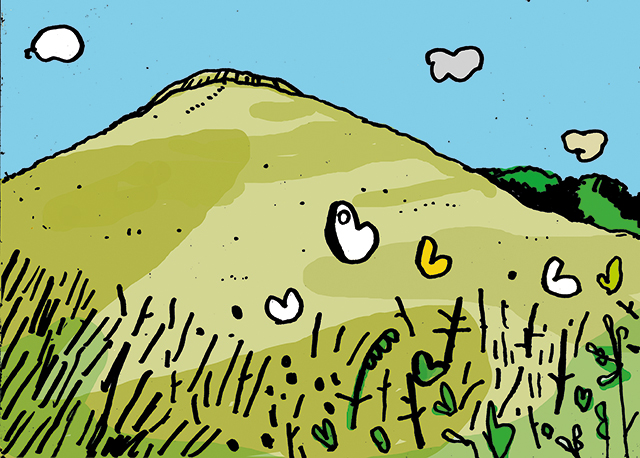 7th July 2018: still, hot, by Maxim Griffin.
Hoe Hill at Fulletby is out of place. A curious mass looking out over the Tetford and Salmonby valley – Tennyson’s neck of the Wolds. If you look on the maps, Hoe Hill appears like a long barrow – even a tor.

Shapely, stepped, there is something familiar about its form. If one scans through a book about prehistoric monuments you’ll quickly find the same shapes occurring. And yet, at least according to geological surveys and archaeological check-ups, Hoe Hill is entirely natural.

I walk down the lanes through Somersby on a day too hot for a serious and lengthy stride. It hasn’t rained properly for weeks, the verges and hedgerows are looking poorly, and the ground is parched – cracked, open clay at the fields edges – hot enough for nettles to lose their sting and birds to save their song.

Up the road, an old quarry. The exposed gritstone is soft enough to carve with a stick. Over the years folks have stopped here to add an initial or two – there are a couple of faces too, features long worn, though to my memory they only appeared twenty years ago or so. As a youth, my mates and I would camp here, quietly mucking around, like y’do when you are 16. We’d scamper down into the wooded valley beyond and lose boots in the boggy ground. There is supposed to be a holy well down there too, feeding off the River Lymn. I should go and have a look for it really but the bottom of the woods will be rife with insects and rotting things, that deep summer stink of damper places.

The Lymn springs up from the edge of Hoe Hill and was the inspiration for Alfred Lord Tennyson’s poem The Brook – we were force-fed Tennyson at school but reading The Brook now as a literary accompaniment to the Lincolnshire landscape, he knows the score”

‘And out again I curve and flow
To join the brimming river,
For men may come and men may go,
But I go on for ever.’

Walking against the flow and curve, back to the source, back to where the river is born – across the valley to Hoe Hill. Prickly, thistly going on chalky tracks that come up alongside the foot of the hill. The signs aren’t obvious, but access is pretty open – if you can’t see a designated way, follow the desire lines towards the hill.

The hill itself is not unlike Glastonbury Tor from this prospect – teardrop shaped east to west, rising to the strange roach stone cap – itself something of an anomaly in this region. You can follow the way ahead, along the edge of the hill and up past the fox covert to an old-fashioned iron kissing gate with a wrought information plaque from the early twentieth century. From here one can summit Hoe Hill (bearing in mind there are cattle/sheep about).

Two years ago, I spent the night up here – a friend and I on a four-day walk across Lincolnshire stopped on Hoe Hill on the first night. We passed the evening drinking from flasks of brandy and eating slices of bread and cheese in the late June air. It was alright. The next morning we filtered water from the Lymn spring and filled our bottles – it tasted like blood. Today, standing on top of Hoe Hill in this fierce heat I can feel my arms burn, so I beat a retreat downhill to the shadier place. The shape the hill changes again – squatter somehow, more like a pudding bowl. Walking around, the view changes again, each few yards changing the observation of the hill – it’s a strange effect, so I walk around the foot of the hill again, counter-clockwise this time, and the view changes again. I climb the summit through the kissing gate and walk down the spine of the hill along a well-defined animal track – the shape of the hill changes. I walk back uphill, following the cattle way that winds with the contours. It is an almost identical sensation to scaling Glastonbury Tor (albeit without masses of tourists and hippies).

I stop again for water and fruit, a little breeze picks up through the high summer haze and a fleet of swift’s circle and dive above. The harvest can’t be far off now – the landscape is ripening, browning, readying. Through the haze, I see Skegness in the east and Lincoln in the west – if it were clearer still, Boston Stump perhaps. The ridges all around are covered in neolithic and bronze age burials, ringing Hoe Hill. There’s something similar to the landscape around Silbury Hill in Wiltshire, in which one particular feature becomes a focus for other locations. There are similar sights in Ireland too – all over, magic hills that occupy regions like planets orbit stars. Hoe Hill is no different but like so many places in Lincolnshire it has been largely forgotten over time. It remains a curious and magnetic place, quite out of sync with the rest of the Wolds.

I park myself back on the summit, narrowly missing a cushion of thistles and pull my boots off. The Lymn is audible through a patch of bracken. Tennyson was right, of course:
‘I come from haunts of coot and hern,
I make a sudden sally
And sparkle out among the fern,
To bicker down a valley.’

Those last three lines are an exact description – Hoe Hill now, in the nineteenth century and in the deeper, stranger past; Hoe Hill, mother to a minor river and sealed in history by a poet laureate. That’s the thing: Hoe Hill is a magic hill, a hill from which a river is born, where water flows from clay and stone, a true kind of magic, the magic of earth yielding life-giving water – our fundamental element springing forth. Tennyson saw it. I saw it. The water flows on, bickering down the valley as the sun continues to roast the land. I take a swig from my flask and continue – onward, in shade where I can.