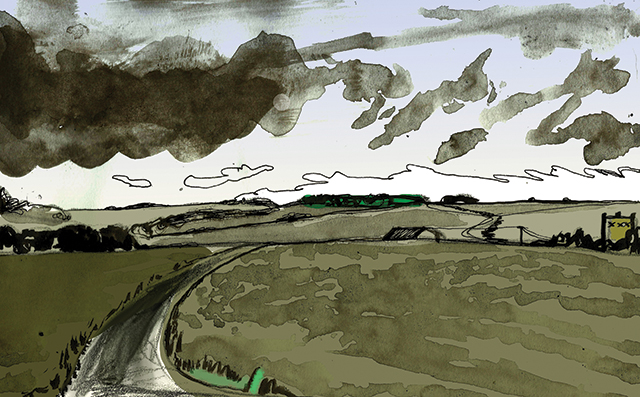 Walk 8: Friday 29th September, 2017 – North from Alford, a storm passes to the south.
Standing on the eastern escarpment of the Wolds close to the hamlet of Haugh to survey my progress so far. The sky is full of turmoil behind me and my boots are caked in thick clay from the fields I have just crossed. Walking warms me though and beams of sunlight breakout over ploughed earth to pick out the geometry of this arable landscape. Autumn has begun, the tracks are damp and the trees have started their shedding. Between Swaby and White Pit stands a barn veiled in cobwebs.

Moving north, parallel with the A16 and the woods at Walmsgate – there’s a vast long barrow in the oaks, one of the biggest in the country. Looking through my binoculars I can just make out the shape through branches and roadside debris. A murder of crows scattered from the canopy at the distant coughing of shotguns.

At the junction of the path and a bridleway, a skeletal badger corpse. All hollow eyes and receding flesh – its face at a grimace as a murmuration of starlings wheels above. The air around in a sudden commotion of amber leaves and I take a slippery track downhill through unnamed woodland. Squirrels scattered into the treeline and a rabbit makes a break for cover, pounding up the way ahead of me and diving into bracken. He is used to flight – a sign warns of hare coursing in the area. I’ve seen it happen – 4x4s and lamps in the gloaming, shadows of hounds.

Leaves keep falling. I walk north again along what was an estate garden – a walled acre with the ruin of a cottage in the southern corner. Through the ivy I see traces of wallpaper. A child’s bedroom once, perhaps. The road is covered with uncollected conkers.

A flash of white ahead and the bark of an unseen dog at the handsomely overgrown farm. Onwards to Burwell where the way strikes behind the church – three crosses in iron on the tower like kisses on old paper. Today is the feast of St Michael the Archangel and this church is dedicated to him. Perhaps I should have stopped for a look. Next time. The path crosses the hill and onto a tarmacked track. Away to the east a dormant caravan sits on the edge of the woods – there’s a burial mound in there too but access is forbidden.

The storm that harried my trail earlier is passing towards the sea – bolts of sun and slate grey washes of rain. I stop. The view is quite something – as far as Spurn Point and right down to Fantasy Island at Skegness, the dock tower of Grimsby and the mast at Belmont catching the sun. I can see beyond there too, just – the cooling towers on the Trent. There was a priory on this patch but it is long gone – dissolved long before Henry VIII even. Nothing remains save ghost stories of wandering nuns. The tatters of a helium birthday balloon flick across the field. I catch it. Happy 70th Birthday. I stow it in my pack. I’ve taken to collecting the litter on my walks, it doesn’t take much effort and seems worthwhile.

The way leads me down into the edge of the woods – more leaves fall, caught in the brambles. Signs are adamant: warnings against trespass. Shooting must occur in these woods, judging by the scatter of spent shells. Again, distant gunfire and away I see three 4x4s hurtle from copse to copse. The ground is wet so I stand for lunch and brew tea on my little stove. Sitting on my waterproof I read the marked pages from the book I have carried.

The author of Haunted East Anglia, Joan Forman lived close by, in the village of Little Cawthorpe and relates several stories from this landscape – a shuck, a phantom dog haunts the lane ahead of me, spectral pigs too are said to scream along the tracks around here. In the 1960s a ghost cow was reported, leaping the hedgerows between Cawthorpe and Haugham. Haunted East Anglia is an entertaining read, one of the better books of its type – easy to find too, copies regularly turn up in secondhand shops. Such books make good fuel for exploring – information and folklore that one might otherwise miss. No ghosts today – just a thin mist in the valley.

Stopping in the village to look at the churchyard, the grave of a child from the nineteenth century – barely a toddler. I peel leaves off the wet slate and place a sprig of acorns at the foot of the headstone. An old gentleman watches me from a window and I stand to offer a hand in greeting but he is gone.

The mist continues as I pass the house where Joan Forman lived – it’s tempting to leave my copy of her book on the gatepost but I think better of it. Onwards over two fields and across a little beck to the edge of the Kenwick Park Golf Course. This path gets a mention in the book too – a murder, a nun, a mist, but all I hear is the chatter of golfers. The path crosses the course, I take quiet delight walking across the manicured lawns.

Onwards to Louth, passing a house by Saturday Pits, where exiles from the plague were sent – the owner of the house grows many varieties of sunflower and sells them at the roadside. It’s rather beautiful, dozens of plants, dozens of colours and I make a note to come this way again and buy a bunch or two. A police car slows by me as I walk along the road “How far have you walked?”

I recount my journey for the officer and he tells me about an uncle who once saw a nun disappear into a mist somewhere near Cawthorpe.