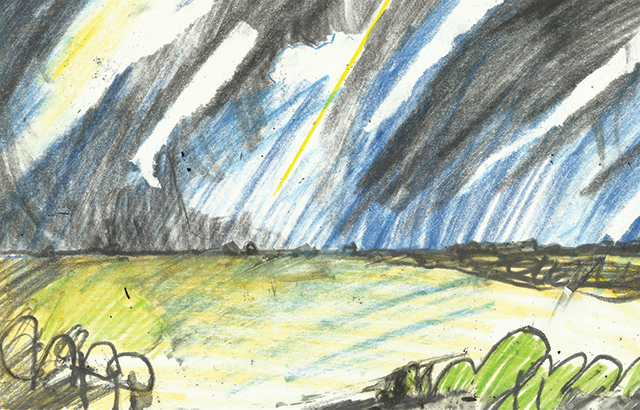 3rd August: Hot, still, by Maxim Griffin.
No let up in this heatwave. Hosepipe bans and moor fires elsewhere in the country, Lincolnshire curls and crackles into harvest time. Dusty, hot days on top of the Wolds – combines kick up plumes of debris off every field; in some places, the ploughing has even begun. I’m out to see what has turned up in the spoil.

Crossing the bypass at a familiar point and heading out into the hills via Cow Pasture Wood, it’s only just after 9am but the sheep have already settled into the shade of a red tarpaulin. Heading south and west quick as I can, I put a few miles in. Soon enough I’m into higher fields of fresh stubble and bales, walking a concrete track over a hilltop. Cow parsnip stalks and dead nettles, freshly laid bales make for an appealing vision. There’s something of a John Nash painting about the scene, a kind of rural modernism. Walking along I play a game in my head. As I progress, bale eclipses bale – onwards along the track, heat haze and thistledown on what breeze there is. An RAF trainer plane, a Tucano I think, zipping overhead very low – I always wave.

Through the wooded valley and straight on, an enormous wheat field, uncut as yet, billows and breathes – the unplanted edges are full of my quarry: flint. Great nodes of the stuff, fist sized lumps of varying quality – enough to have a crack at. I hunt around for a couple of decent pebbles – quartz hammers for the knapping. Quickly enough my rucksack is half flint, with reasonable pieces (and a badger skull and a few pheasant feathers – handy offerings to my children) and I look for a spot to sit and work.

An unexpected memorial bench appears. I lay out my gear and start splitting the rocks. Across the valley, combines whir in field fumes and I strike home hard – the first split revealing the inner liquid surface of the flint. Not a brilliant bit but pretty enough – bands of chalk and black, blue grey and red and a sharp edge. I shave a stick with it, curling bark off.

Flint is such a curious substance. Strikes can ripple through it like hard water – and there’s a riverish quality to the colour, like finely layered glazes of paint…

I’d be happy enough sitting here all day, making little blades. I’ve more water than usual, some lunch, a hat and enough shrapnel in my pocket for a pint on the walk back into town. Sounds alright, sounds like a plan – but I’ve got an appointment to keep a few miles away. Louth Museum have booked Norfolk flint knapper and prehistoric expert John Lord to lead a course on making hand axes and the like. It’s being held in someone’s field, a few miles from the other side of Louth – might as well walk there then.

By the time I reach the bypass again it’s hot. I feel like roast pork. I’ve been keeping a stripe of cloth around my neck – occasionally soaking it in water, it takes the edge off. Everything hums like an electric fence – somewhere close, a billion grasshoppers gyrate.

Town is sweaty – hot brick, hot concrete. School holidays too, a coach load of older folk on a trip from Wales.

There are no paths as such where I am heading. Once out of town, along Eastfield Road, I’ve got to walk three miles along the roadside. Great. That being said, it’s always nice to walk places where one wouldn’t usually. I’m careful though; it’s not a main road but traffic rattles along at a pace. I soak my hat and scarf in cold water and trudge onward. A 4×4 slows, as if considering to stop. I wave and a white bearded fella grins – I’m bound to walking I tell him and he drives off, chuckling.

There’s a quantity of roadside litter about, the usual sort of thing: drinks bottles and fag packets, a desiccated toad – curiously, someone has dumped a DVD collection too. Das Boot, The Rocky Horror Picture Show, the second Transformers film and a compilation of Velvet Underground songs. I’m up to my waist in thistles and stingers – a few grazes on my legs and sweat pouring off me as I reach the place for the course.

A tent is already set up and an array of handsome flints and antlers is laid out for inspection. The fellow from the 4×4 strides over – he’s John Lord, the expert knapper; a strong looking bloke, weathered and twinkly, looks like he spends his time in the open. Introductions done and the others attending gathered, he leads us through his workings.

He lifts huge lumps out of his truck, massive nodes that make my findings look ridiculous – I keep them in my pack. Quickly, he hoys a hammer stone and cleaves black slices with ease – sharp quivering blades appear, beautiful platforms for more delicate crafting. Within minutes, edges become serrated under antler percussion. An axe manifests out of the abstraction of the shorn lumps – a prehistoric cleaver for the processing of a kill, something to joint a still warm mammoth.

We sit in a circle, all having a go, quiet concentration and the sound of rock on rock. It’s good. Everyone fashions something – a good edge, an interesting flake. I curl a hook with one blow and split the tip of my thumb – a little blood seems only right – and I gather a dozen or so fine slices around my feet; each one sharp enough to put a point on my pencils. Hours pass in contented exploration.

Mr Lord gives the axe he fashioned to an enthusiastic young lad and we help pack up, the ground around us layered in thousands of fresh stone razors. I’ll head out again once the plough is done, perhaps up to Grim’s Mound – find some bigger lumps and perhaps fashion an axe of my own, maybe take it into the valleys where the red deer used to roam. It’s something I like to do, take an object as a passport, a token to carry when walking, something to lever my imagination into history – something to show the ghosts on the hills.

I walk home, the sun lower and in my face, and arrive caked in dust. Pulling my boots off, tiny black slivers of flint land on the kitchen floor. Later, my children gathered round with feathers and badger skull, we shear cucumber with new black stone blades and portion a chicken into quarters with mesolithic knives.