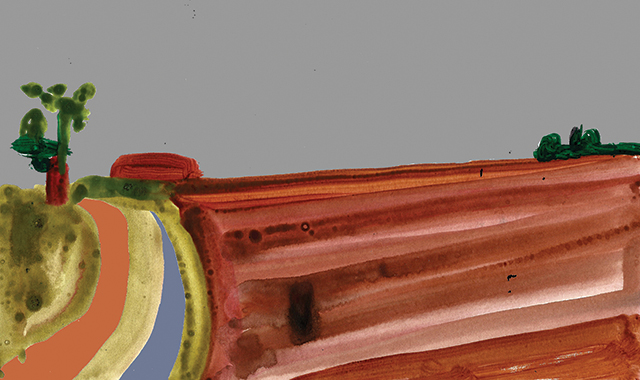 Sunday 2nd December – murk then clear, by Maxim Griffin.
Out in the darkness, early doors. Walking south along the Viking Way from Caistor. Not so much a mist but actual cloud – my headtorch bounces and reflects on the vapours creating a solid beam of light, a white rod casting from my forehead onwards. Hoping for a view west I climb up in a deep gorge from Nettleton over soft ground and by occasional dew ponds. It’s a handsome roll of countryside in the daylight, similar to the South Downs – like those paintings by Ravilious, hills drop in a rounded way.

The sun should be rising now – just a vague change from blue to grey, a trace of purple – everything is sopping. Perhaps my old herringbone coat was a poor choice.

I pan my head around, beam still finding a route through the weather – up ahead a pair of eyes flash in cover. Round, unblinking eyes that throw the light back at me. A fox. Very still but paying very close attention to my presence.

Up. To some field’s edge. Give or take a contour or two, this is the highest point in Lincolnshire. I look west. Clearer that way – flat lands spread out towards the Trent – I see the power stations, or rather signs of them. Great stacks of condensation rise from a dozen or so cooling towers lined across the horizon – Nottinghamshire and beyond that, at least on a clearer day, one might see as far as Sheffield and the east of the Peaks – I was out beyond Sheffield last year – looking this way I could make out from Lincoln to a good chunk of the M62. Two fields away, the radar tower connected to Humberside airport watches over the sky. It might be getting brighter, but the clouds pour off me, through my hair and down me neck. I turn left, back into the Wolds.

The map says interesting things – either side there are masts of some kind, one military, one civilian – a long barrow too – hump still visible, with trees growing from it. Who is this who is buried there? Someone important no doubt – a dynasty perhaps, some long forgotten line of chiefs, kings or warlords – still overlooking their dominion.

I must walk a little down the main road, the Caistor High Street. Walking along main roads is horrible but sometimes required. Quiet enough this morning though. There’s a bridleway over the road – a good place to stop and check the bearings. I could follow it north, towards Rothwell, the way looks promising, another deep fold and on the map at least, great divisions of woodland as though they are lined for battle. However – this time of year time and light are tight – I fling myself as fast as possible towards Thoresway and take another zig zagging path south until hitting Stainton Le Vale and a clear straight root to Orford and Binbrook.

South from Binbrook – the old RAF base is a matter for another day (and it is a strange matter ) – south along another ridge for a good way. One gets an idea of the makeup of this part of Lincolnshire – a series of plateaux cut with steep valleys. You can see why there are so many wartime airbases up here. Can you imagine the noise? Dozens of Merlin engines – the weight of high explosive. I stop at Isaac Plot Plantation and make a brew. The sky has cleared to a fast current of scattered low cloud – big, quick shadows over fields green with winter growth and ruby edged woods – above – a kite! A massive beast – you could mistake it for an eagle such is its scale. I climb a sawn log to get a better look and, in the process, rip my trousers. The kite rides a thermal across the fields – out of sight.

The breeze picks up and the shadows of clouds quicken. It’s cold – there’ll be a frost tonight.

North of Kelstern – a trig point, the war memorial, a cluster of trees. Small roads meet. As a boy, I knew a very sensible lady who told me she once saw a skeleton standing in the middle of this junction. There’s a strip of runway left, tufts through concrete panels. Later I find a photograph from 1944 – same spot more or less, Lancasters in summertime.

At a barn with red tarp slapping in the wind – a stoat rushes with a rat in his mouth. And crows circle.

I’m not sure what the time is – my phone is broken and I never wear a watch – the sun is dipping – half two maybe, perhaps three. To the south, a bank of cloud outlined in the whitest light rides the back of a green edge of hills.

Suddenly – the vision locks into place.

I flick open my little paintbox – the colours match. I paint quickly. Over the rusty woods and greenest fields, gulls flock and wheel and glitter in the lowing, brilliant sun – like water, birds in the air like the reflections on a river as those clouds ripple quickly east – and there on the slate grey line of the sea, shipping catches the sun and I look – looking from the northern bank of the Humber down to the turbines out in the water near Skegness. Two counties in one view – Yorkshire to Lincolnshire, and earlier, Lincolnshire to Nottinghamshire to Derbyshire, perhaps. Quickly, making marks for woods and the roll of hills – those glacial valleys folded with chalk and the indefinable colour of bare trees in early winter – branches in sunshine as bright capillaries – and beneath the green, plough marks and scrub match the patterns of my ancient herringbone coat. A wet road in purple, shining. It’s just like those paintings Hockney made near Bridlington. I stand and work for a long time.

Towards home, I pause in a big field and pick nodes of flint out of the slippery path. A couple appear – dressed for hiking – big packs, waterproofs, branded hats.

“Are you going far? “ she asks in a strong accent of Yorkshire.

Yes – as far as possible.

Overhead – a great phalanx of geese head east with the light of this winter sun under their wings.