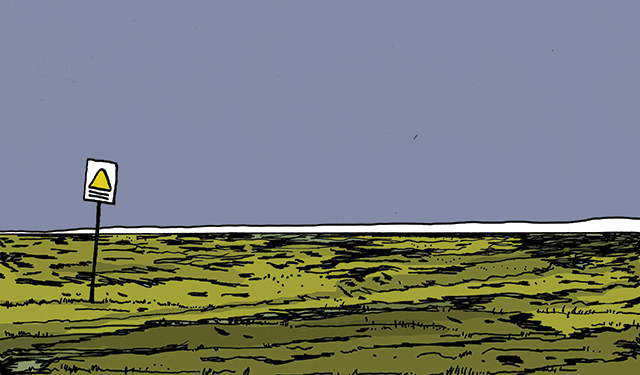 4th November – level murk over jaws of Humber, by Maxim Griffin.
Autumn turns – across the outmarsh – grey and brown – away – a few ripples of light cast through the thick sky. Time for bigger coats. We’ve been redirected to an auxillary car park in a field by the NATO observation tower. All vehicles £5. The farmer directs us in. He’s a happy sort of fellow, tells me his plans – a maze of maize in the summer, over there – I offer to be his minotaur for the season.

Donna Nook. The grey seals are in, hence the sudden increase in parking cost. These seals draw quite a crowd through November and December. Folks come from all over – National Geographic came a while back – there’s a minibus from Birmingham pulling up by the portaloos. There’s a burger van too and a stall selling hats and jam and vegetables – the faint air of meat and onions and stewed tea.

I climb up the dunes – the beach spreads north and south, curling into the mouth of the mighty river Humber – through the grey, Grimsby dock tower is just visible as are the forts at Haile and Bull sand – ahead – Spurn Lighthouse and the Yorkshire shores. Tankers wait on the tide change. I was out this way a month or two ago, walking in mirages near Saltfleet – Donna Nook is a few miles north from there. As winter arrives, so do the seal colonies. Hundreds of bulls and cows gather to breed and birth sweet-faced pups. It’s early in the season but already there are some very young ones visible, mewling in oily tufts. The sound carries – once one’s ears tune into it, there’s a great distant braying.

Donna Nook serves as a weapons testing range most of the year. Out on the waterline, some mile or two off – targets fashioned from scrim and scaffolding – makeshift tanks for attack helicopters to strafe. There are seal bulls everywhere – massive beasts that thud along the distance. They brawl among unexploded ordnance and scuzzy brown surf. A kind of cavernous growling – like a bear or a lion. Starlings cluster in the skids of afterbirth – a sign that warns of munitions and other marshal debris – a bored child grumbles.

The crowds come for the pups. Ten o’clock on a Sunday morning and there are several hundred people about – families, disinterested children, heavy birders with vast binoculars and the countenance of Bill Oddie – waxed coats, army trousers – all kept away from the seals by a pair of waist high fences – numerous signs warn not to touch, not to feed – they bite y’know. An angry woman smokes hard and complains bitterly into a telephone. Three yards from her is a mother and seal pup lolling in the sand.

Much can be made of the young seals, they are, let’s face it, incredibly beautiful. Huge, wet, doggish eyes peer up through the wire – the mothers are fascinating. A strange balance between elegant and bulbous. Fast and bulbous when they get moving too. One crests a lump at the foot of the dune and barrels through the grass to her crying child. The humans put these mothers on edge – I step back aways and do not reach for my telephone. It feels a little rude to stand and gawp – this is after all, a maternity unit of sorts.

The dullness of the day is not without grandeur – I move my eyes between the panzer mottle of seal skin that blends so handsomely with marram and mud to the churn of the North Sea. Occasional gull flocks wheel – a magpie rides the back of a sleeping bull – the horn of a freighter bellows miles away. Luminous targets flutter in an equal orange to the berries of sea buckthorns. I squeeze one – it stains my thumb.

Busier now – polysytrene cups of tea to the fore. I walk north a bit, away from people. Some fellow on the dunes making a fuss with huge lensed cameras and numerous, expensive looking sacks. I walk on – the landscape turning from coastal to estuary – weird rubbish in the tidal zones – a fridge, a whole tree, myriad plastic flotsam, bottles that remain, a dead gull.

A pillbox offers a good spot to make a brew. I dangle my legs over the loophole and watch the colony from afar. This was a busy spot in the war, two airbases, a POW camp, night fighters and gun emplacements – anti-U-boat sonic arrays manned briefly by a young Arthur C Clarke, more UFOs that can be healthy – matters for another time… I hear the heaving of seal on sand, and the honk of geese – a skein in full formation hexes the point at which the river becomes sea. A film crew has turned up – people mill about with interest, a boom mike, waving children, someone directs – close, the seal pup still wears an umbilical cord and suckles mother, whose eyes are open, wary.

A man informs his partner of seal facts, the fat content of seal milk in ratio to that of human breast milk. He reads loudly from a temporary information board, “What do you think of that? 75% fat, enough to kill a man!”

The seals look on incredulous. Don’t touch the humans dear.

Better perhaps to come back at a different hour, dawn light here is something else – back over the dunes as more people file in – outdoor gear, rucksacks, flasks – a tiny baby calls from a papoose, close to the chest of her large bearded father – above, a microlight from North Coates way, the pilot waving to the throng. Crows in a grey sky, the smell of onions, bare trees.

More traffic trundles in, directed by the smiling farmer – only just noon but the sun seems spent, a vague disc low through cloud. A hawk over black earth field. An angry woman on a telephone, smoking hard. Home then, it is a cold Sunday in November. Let’s have spag bol for lunch.