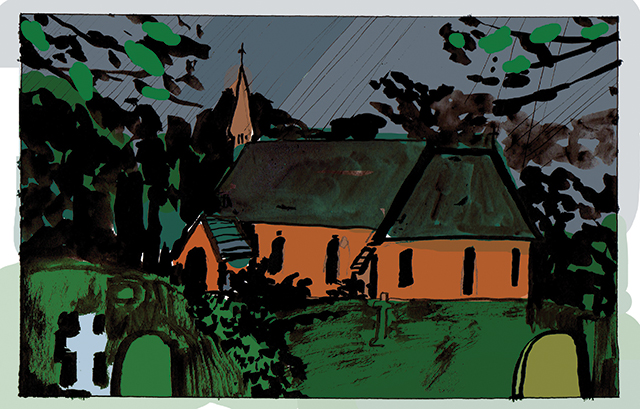 1st of October – Lincolnshire Day – all the rain is with me, by Maxim Griffin

Uphill. A stick and a raincoat. Water is pouring down the track – water is battering the hills – drizzle turns to a slate grey wall before I’ve even started. It doesn’t matter. I have a mission. One of my sons has had terrors in the night. He requires a talisman to keep the dark away.

They go by many names – adder stone, holey, serpent stone, Odin stone, chicken god – any stone with a natural hole through it is regarded to have powers against the supernatural – counter witchcraft, to lay ghosts, bring luck, cure evil dreams.

Walking less than a quarter of a mile and I am soaked. The path heads to Wold Newton on the Hawerby cum Beesby parish boundary – I used to live in a cottage at Beesby, might have a look in later. At the dogleg of the field margins stands an ash tree – pausing in its shelter I notice that among the roots are small piles of coins and flints. What is this? Something old at work – this is good – within a few moments I’ve pulled the first hag-stone out of the tumbling clay – I pull it up to the line of the hill and through the holed flint I frame the woods of Stocks Furlong.

Stocks Furlong is the highest point between here and Humber, a great roll of chalk, clay and flint crowned with an imposing wood – the kind of place that in other parts of the country might conceal the earthworks of some Iron Age fort. There’s a magnetism to it.

The rain advances from east to west – all the views are obscured by weather – no matter – I keep my eyes on the edge of the fields. By the time I’m at the wood I’ve three more hag-stones in my muddy pocket. There are signs. No right of way, trespassers will be prosecuted. Someone does not want folks poking about in the wood. What are they hiding? What’s he building in there? I need shelter so I scoot in three trees deep – dripped on by the canopy but out of the squall. Glasses wiped free of earth and rain, I inhale a sandwich and pull a Czech army rain cape out of my rucksack. It is not a good look but it will keep the worst of the weather out.

Around the southern face of the woods there used to be a permissive footpath that led down into the valley but there is no evidence of it. Downhill is a 4×4 – I double back – no need to make an enemy – an honest mistake is one thing, but the right of way is sketchy and I’m in plain view even with my Czech get up. To Wold Newton then.

I pull the cape off at a tower of bales. Two big horses beyond barbed wire at a rocky track. The water runs down around my feet – I remember it mentioned in Haunted East Anglia by J. Foreman that there is a bad barn nearby – will-o-th’-wisps and rum feelings – somewhere to seek another day. I head over a field with sheep and come up to the church of All Hallows – an odd building, one of those ones James Fowler rebuilt in the mid-19th century – bits of other, older buildings collaged together – fragments of Louth and Bardney Abbey.

The porch is open. The church door is locked – I sit on the bench – week old flowers in a green pot next to me. Check my phone – No Service.

I sit for half an hour or so – the minutiae of the notice board and the sound of rain drift through yews and Scots pine. A peaceful spell.

Back downhill to the road through the village – in the summer of ’89 I had a friend who lived here – Memphis Belle was being filmed up the road and we saw the three airworthy B-17s every day. Half of Grimsby was an extra in that film.

I beat south along the road. The rain eases up to only drizzle – past the farm and a whitewashed house with a large green pond but before the mysterious Scallows Hall, east into the woods known simply as The Valley.

The Valley is a relative of Welton Vale and Hubbard’s Hills – another scar from the last ice age – there are some heroic trees here. There are signs of life here. Look.

A wigwam of deadfall – fellow den builders – good – several more, and an attempt at a chair, a crude hearth – this is good, perhaps traces of some unexpected nomad group, perhaps the Scouts of Binbrook. There’s a bigger hearth further in, a folding campfire grill and a ring of stumps for squatting on. A sheet of corrugated iron shields a wood pile and the drip drip drip from above makes metal woodland music – an accidental Lincolnshire gamelan.

Deeper into the valley there’s a fallen tree halfway up the southern banks – the main limbs have been cut away and taken to season, the trunk remains. I climb up the crumbling scarp balancing my weight with my stick – nimble as a mountain goat. The tree collapsed under its own weight – as the roots were sucked out of the ground the clag and chalk came with it – the geology collapsed to surface – big too – twice as tall as a human. I poke about for fossils – a fossil in the roots would be good. None today, none yet.

Out of the woods and into the open – along the lull of Beesby valley where I see the house I lived in for a time – doglegging over the back of Bluebell wood I walk slow and careful, eyes to the ground spying for the right kind of stones to charm the nights of my son – I poke at everything, three, four, five hag-stones yield themselves to me over half a mile. Good enough to string together into a kind of heathen rosary. The rain returns in dark divisions. And I am ecstatic in the weight of another squall – mission accomplished.

Within the hour I’m back home, a coffee, a wash, a dry pair of trousers. I sit down to write this up and make the drawings. The postman knocks with a small package. A gift from the Kentish music group Hand of Stabs – a hag-stone from the Medway.