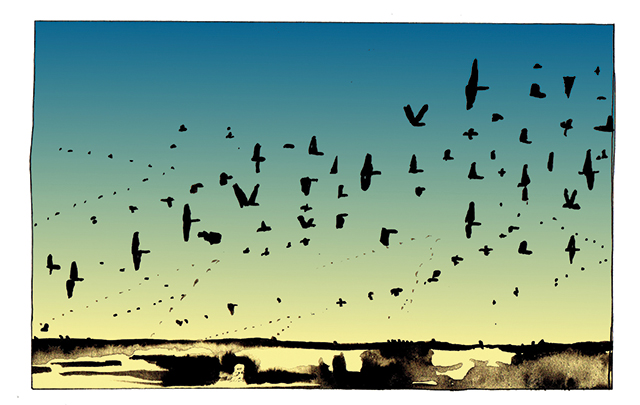 1st November 2019 – in all weathers and colours, by Maxim Griffin
Below Boston and to the east. It’s gone midday. Dark by five. Best move.

I’ve an appetite for uncertain landscapes – a requirement for mud and tides and quicksand. I want to walk under the shadow of 4,000 pink footed geese.

By the Ship Inn at Fosdyke Bridge a bridleway presents itself. Little boats moored up in the silt of the business end of the river Welland, a yard of caravans, telegraph poles that lean against decades of wind. Head on – due north for a couple of miles. Across the river, Frampton marshes – I can hear birds but not see them – a few waders picking gingerly at the intertidal zones, the familiar spiralling thrills of curlew voices.

The Welland bends north to meet the mouth of the Witham – with clear eyes one can see the open prison across the water. North Sea Camp. Jeffery Archer was there. You can walk right by it – there’s a bird hide nearby.

On – leaving the Welland behind – on and east on the bank – all about is the strangeness of the Wash. Riddles of creeks and salt marsh give way to the ebbing places. Have you ever seen Morecambe Bay at low tide? It’s an eerie sight to watch that tide come in. Remember the cockle pickers? The Wash is a very similar landscape, a very similar atmosphere. When the sea retreats only a fool would venture out there. Out there is the weirdness. This land tells lies. Distance and space are hard to gauge – the footing slips and sucks – takes boots, and jewels and lives. Remember the Broomway in Essex or Nine Lives Causeway to Eel Marsh House? Nothing good ever happened out in these uncertain territories. They say King John got across but lost it all in the process; mind you, he died a week later, of a surfeit of peaches and cider they say.

I’m looking for geese. Low out east a squadron of something – not geese, too small, too fast – starlings perhaps – it’s difficult to tell – I am learning the birds, but a combination of sea murk and sun does much to dazzle me – godwit?

There’s an active range ahead – RAF Holbeach – like Donna Nook, a hub for air to ground gunnery – no red flags up today – I can go onwards – out there – the ruins of old ships, run aground as targets. Once orange and white dazzle painted, now peeling and receding into fragile hulks of disappearing minerals. You can see the light pass right through them – cannon fire holes in iron and steel.

I hear geese and can hear the movement of wings – irregular, big, low.

There – back the way I came – from Frampton Marsh a great formation but it does not come close. Pink footed? Brent? Too far to see – they winter here from the arctic reaches. Then – ahead of my position and over the waters through a cobalt strike of rains off east – as many geese as possible – I try counting – they loom in, an uneven wedge calling and responding, overtaking, leading, dropping back – the sound is near free jazz – a big band of honks and hisses driven on feather and instinct – weight of their movement – below, a curl of knot and dunlin – all the birds are here – something flashes a way off on the other side of the Nene – a different pair of eyes, binoculars maybe. I should have brought my own.

How do these birds map this land? What do they know of the rivers and the particulars? How will it be when the landmarks change – you cannot keep the sea at bay forever.

Look – with a different kind of binoculars – 1943 – an American B-17 brought down by wildlife engine strike on a training sortie – 1941 – a Heinkel, a Junkers, night intruders explode in ack-ack salvos where the Witham, Welland and Nene enter the ocean – all hands lost – all out there, aluminium and bone fading in the depths of shifting sand.

Then – the fleets of Lancasters in formation like geese – skein to Hanover, Bremen and elsewhere and limp back, fewer – over a moonless November Wash.

Some things rarely change – an American F-15 snaps me back to the present. 100 million dollars of muscle jet – probably heading to my neck of the woods, to loop and strafe north of Saltfleet before the seal colony establishes its winter headquarters.

Onward – to something curious. An earthwork in the sea.

Outer Trial Bank was built in the late ’70s as part of an experimental government water resource scheme – the project was ditched – something to do with the unfeasibility of building a fresh water reservoir in the sea – Outer Trial Bank remains, a man-made island slightly out of reach. A perfect circle, it is not unhengelike – like a low Anglian Silbury. It is known locally as The Donut and could easily be considered a piece of accidental land art – a distant cousin to Spiral Jetty in the Great Salt Lake of Utah.

Outer Trial Bank marks the end of Lincolnshire – everything merges in the light – north west to Skegness, a black cloud beyond the bright frame of the Jubilee Odyssey now shut for the season.

East from here are other places. Norfolk. South folk – no hills from here to Gog and Magog past Cambridge. West – one flash of sunset – then gloaming.

One day I will get out to Outer Trial Bank, perhaps, camp for a night or two, declare myself king… I must head south – along the Nene – I heard a story from the 17th century about a werewolf roundabouts.

I set foot down below into fenland and the earth is spirit level and bible black.