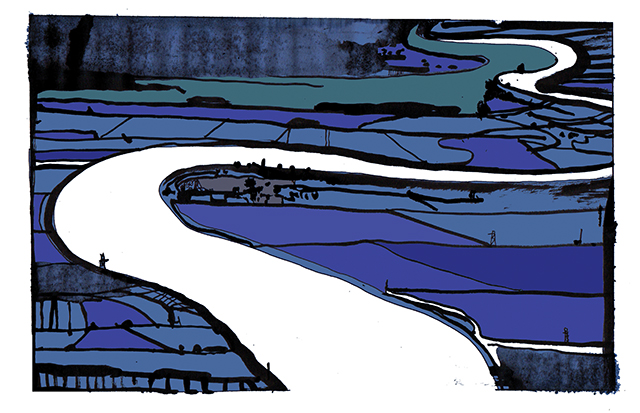 Somewhere on the Trent – north of Gainsborough, heading north, late in the day – three hours til sundown. The river on my left, my rucksack slung to the left – I’ve been nursing broken ribs for most of a month. I can’t turn left though. No left hand path until Scunthorpe and I do not intend to walk so far this day. I had not intended to walk at all. Ribs aside, everyone in our household has been laid low by the first lurgy of winter and the death of our old dog Henry (a black Lab cross, a good dog). Spirits are below sea level – cobwebs require blowing out – the fields over the other side of the Ravensfleet Road are full of crows and omens and shadows.

It’s a strange place this. Over the water – a plain called Heckdyke and one of the mighty avenues of pylons that grow near the Humber – a black wind whines through them – this side of the river, Jenny Hurn Drain – who was Jenny Hurn? I’ve a vision of Jenny Greenteeth lurking below the surface pulling at my bootlaces.

Christmas shimmers over the border with lights that look like they’ve been up for a while. Over the river there are twinkles on the houses – a pair of big windows that can be seen through – a vast television, the news probably – Johnson’s face, briefly, aglow, gooseflesh. A couple of swans idle on the current. The sky is on the bruise now – two hours til sundown.

I’d been given a record. And the Moon Shone Bright – The Broadsides of Grimsby – Collected Lincolnshire Ballads. A handsome cover – an aerial shot of the Trent in blue filter, stark enough to be almost abstract. I can’t tell you what it sounds like – I don’t have an LP player at present. The great Lincolnshire folklorist Ethel H Rudkin had arranged the recording – perhaps in a kind of Alan Lomax role – y’know, Library of Congress stuff. Rudkin (known to her friends as Peter) lived around here – probably within the image on the record cover – there’s not a great deal of biographical information available on her, save for a rather splendid obituary I dug up. Seems like she lived quite a life – I’ll dig deeper – characters like Rudkin are cultural heroes.

Rudkin wrote a seminal paper on the subject of Shucks – ghost dogs, hell hounds and the like – you’ll find canine spectres in most cultures and they crop up time and time again in the counties facing the North Sea – plenty of encounters from Durham to Hookland and down to the Essex marshes – they seem to turn up just before something bad happens, banshee like. Big too – bigger than a calf – Lincolnshire has a fair few – Hairy Jack, the barghest of Willoughton, Old Toll, the wizard’s dog of Northorpe, the albino shuck of Little Cawthorpe without a name.

Antiquarian and folklorist CL Nolan wrote in 1901: ‘He takes the form of a huge black dog, and prowls along dark lanes and lonesome field footpaths, where, although his howling makes the hearer’s blood run cold, his footfalls make no sound. You may know him at once, should you see him, by his fiery eye; he has but one, and that, like the Cyclops’, is in the middle of his head. But such an encounter might bring you the worst of luck: it is even said that to meet him is to be warned that your death will occur before the end of the year. So you will do well to shut your eyes if you hear him howling; shut them even if you are uncertain whether it is the dog fiend or the voice of the wind you hear.’

It’s cold on the river. No cover to cook. There are woods off to the east – paths heading through too – good, I haven’t got the energy to climb fences and while the meanders of the Trent look pretty enough, everything is bleak, bunkered down today. The pewter sun can’t cast a shadow. Everything looks better on a full stomach though, so I head to the woods. An hour of day left, and I’m not being picked up until late – check the batteries in my headtorch – full beam.

The big fields hold a lot of water – an oily film over a slick clay skin – a jackdaw lands with a plop. A ground mist developing – just a trace – temperature dropping – oh, my hat is missing – it was there in my pocket.

As I approach the cover of the woods I try to work out what colour they are – a blue black purple in this light, save the single birch tree on my way that sticks out of the forest margin like a bony fist. I tug some of the loose bark away – papery stuff, good for lighting fires and stuff it in my coat – I make a quick drawing – a white tree in the darkening.

Out of the breeze and away from the path, I set up a makeshift kitchen – onions, garlic, spicy sausage, tomatoes in a tiny pan – a quarter stick of yesterday’s bread to mop up. My tiny stove – blue flame. A quick red stew in the darkening wood – I hunker down into hot food and forget my ribs.

Quiet and dim – just the wind through limbs, the hum of tarmac nearby. Better trudge on – dark enough for torches now – a road cuts the wood. Brake lights a hundred metres up – turning then gone – must be a car park.

I cross – another car as I hit the next path – radio on – ‘Last Christmas’ zooms by – headlights in the swirl.
I check my phone – no signal – two hours til pick up. The path curls normal toward Laughton. Towards a pub.
Torch off – let my eyes adjust – over the fields, the fairy lights of my destination.
A voice – calling and awaiting – calling again – far off – then near.
I turn.
A big black dog.
Blinks once – steam and slobber.
“Be off – get gone.”
This year has been weird enough – the dog bolts.
Time for a pint.
I tell my wife about it later. She says I should have stroked the nice dog.
She’s right, of course.
Onward into another year.