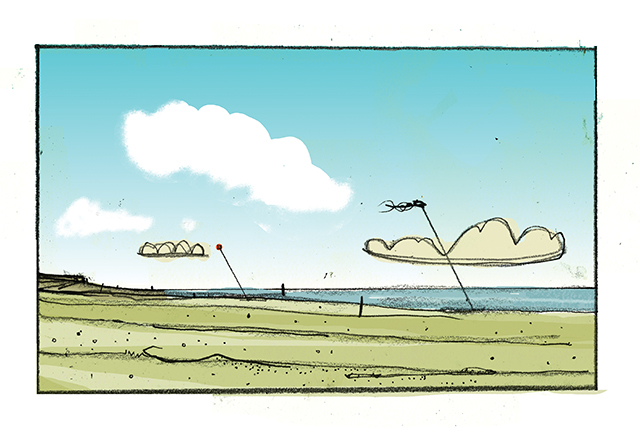 A rare Sunday with nothing on the calendar. Cold and blue. A bit of a breeze. My third son wants to fly the kite he got for Christmas. Boots on lads. Rucksack stuffed. Stove, crumpets, butter, a towel just in case. We pile across the marshes, four boys, dog, my wife and I. Dylan, ’66, Manchester playing very loud.

Rather than head to our usual haunts, we aim for Sutton on Sea. I want to look at seaside buildings and see salt burned concrete. Just outside Mablethorpe we turn down a back road by the turbine farm. My father loathed this road – he hated feeling the wind buffer his van. He hated the potholes and glare of the low winter sun. We had to come this way every week, delivering headstones to churchyards along the coast. I rather like it. Isolated bungalows – pigs – black earth with gulls on and the steady swinging sound of gigantic blades turning – telegraph poles that crackle. A sign that reads ADULTS ONLY CAMPING – another – THIS LAND IS NOT FOR SALE.

We pull into Sutton. The lettering has fallen from the telephone exchange and in the topmost window of a nursing home there is a life-size plastic skeleton.

The wind is stronger and colder. Good. Good for kites.

The six of us head to the promenade – the usual issues hold us up – a fiddly zip, a stone in a shoe, the inevitable toilet requirement. My youngest son rides my shoulders and is filled with joy. Another sign – BOWLING GREEN ONLY – the colonnade has been boarded up.

I love this kind of seafront very much. The chalets are battered but sturdy – bright paint – Cadmium red hue – Hunters green – cobalt – Iron oxide – wood at the edges like bog bone, old, past the better days but still standing. A temporary fence surrounds a permanent fence. Steel railings with no paint with hundreds of fading ribbons. We inspect – messages from the living to the dead fluttering toward the North Sea.

The sea – always the sea – the North Sea – that great sky over old Doggerland – it compels me.

The boys are set loose. It is quiet out – Stay where I can see you – I can see from Humber to the Wash.

The beach is high as the tide is low – light, fine and blond sand first, no litter – then the coarser stuff, the shell smash – occasional flints. The wreck of the Acorn is barely exposed today – that might be fun for another day, to set the boys to an excavation… Then you hit the recent sea bed, flat and packed and water glazed so the sky reflects off it perfectly mirrored.

Already a son is tangled in kite line.

My wife and dog stride splendidly towards the sea with the little one not far behind – it must seem so vast to him. He runs from the rolling brown waves. Towards Mablethorpe a figure all in white throws a yellow ball for a white dog. South to Anderby someone is fishing – I cannot see the rod but I can read the movements.

The tangle has escalated. Three boys are now negotiating 200 metres of white line with their feet and voices. I perform surgery with a penknife. We are back in business. Keep the line tight – not too much – okay, now go – no, you go – let go – a giant fish of many colours rides the wind above us – then nosedives into the sand like a bullet – again – tight – okay – like this – better.

Right lads, I’m off for a swim.

Nothing fancy – kit off – a minute or two in surf – I used to swim in the sea a lot – we had a club of sorts – The Friends of the North Sea Free Swimmers Association. We had a swim and a good picnic after. Always when the weather was worst. Does you good, a bit of exposure to the elements.

I’m down to not much and a seal pops up out of the water twenty paces away. Nothing else for it – I turn – the kite is still up – get in the sea.

Brown foam and debris – around my bare feet – parts of crab and shell on newly deposited flakes of shell that shimmer like gold.

Sure it is cold – but not unbearable. I wade deep – deep breaths – plunge – up – the kite still flies. A few strokes will do – I tumble about in the brown waves a bit and try to get a seal’s-eye view on things. One of my sons runs to the shoreline with the giddy dog and a towel – the giddy dog gets in the sea.

Sand is whipping in and I perform a Mr Bean style dressing – the North Sea gets an eyeful.

The kite against the bright sky – its flickering tail, its shadow like a wraith. My youngest son shows me some important rocks – back to the relative shelter of the promenade and we quickly prepare crumpets over my tiny camp stove – hot butter and sticky sandy fingers – an elderly gentleman on a mobility scooter trundles past with a terrier in his lap.

Far away across the sea a large ship heads north – I look it up on my phone – a tracking application – the Lowlands Courage under the flag of Singapore. Shore leave in Goole tonight lads.

My sons climb the sea wall and leap back into the softer sand – no need to rush back – the children are happy and it is cold and bright – we unfurl the kite again. My wife writes things down – ammunition for her poetry.

The kite flails and collides again with the ground – another tangle – another surgery – the dog barks for his ball and I launch it with a lime green plastic launcher that does the same job as an Aboriginal spear chucker.

Two figures in black cross the beach – one supporting the other. A bunch of flowers and a wooden box in hand.

They pause before the intertidal zone and the ashes become part of the landscape.