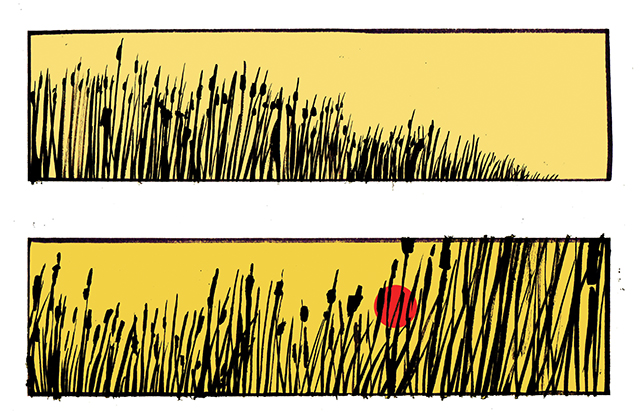 Pamphlets find me. A right kind of information; walking leaflets, maps, programmes, birdwatchers’ lists photocopied in the library and available in the church – 10p donation. I’m a sucker for old graphics; things I can just remember from childhood.

Poorly printed, good; homemade, even better. I’ve one from the council, circa 1983, about the prospect of atomic war over Lincolnshire, rubber-stamped with the smirking imp.

I was given a souvenir chapbook for my birthday entitled ‘Bolingbroke Festival, 4-7 August, 1966’. A glossy publication, full of dry essays, timetables and the like (barbecue, bonfire and fireworks, 8.15pm).

I’ve tried to find that moment; looked for photographs, nothing has come up yet. I’ll peel the layers of the onion on foot inside.

The Castle was exhumed from three centuries of neglect back in the early 1960s. I’ve an aerial photograph in my hand – 1964. The shape is there, but the stonework is largely covered in turf; the shadow of a digger in late afternoon sunlight.

In the photograph there are no leaves on the trees – November perhaps – the photograph credited to Kenneth St Joseph, a pioneer in (above) his field.

Now. The foundations are visible. Mucky, green sandstone, soaking up dampness since they were set back in the 1230s.

The East tower is gone completely; the breach makes for a good point of entry.

An act of ordinary tourism. Perhaps I am becoming my parents – flask, guidebook, sandwiches. So it goes. I have a memory of picnicking here as a child, then as a teen, and later with my own sons.

I climb up into the walls of the South East tower – faint earthwork traces of wooden service buildings across what was the courtyard. It’s slippery, soft, taller that it looks from the gate.

If there were other hands perhaps I would hold them – boot nudges old mortar, sand and lime, maybe bulls’ blood, maybe original, and in one place set in, tiny fragments of seashell.

The stone is rough; not the best, but the best of what was available to hand.

The founder, Ranulf de Blundeville, built this one and three other castles elsewhere that match it, all identical – probably the same set of masons, the same team of builders, same plans.

Maybe the castles came as a package – castles as new-build property development – there was a lot of that.

Gingerly stepping, the thickness of the wall to the South tower, the kitchen I think, a deep drop within – door space and steps down.

I park myself looking out of the reeds and flick through the souvenir programme – another earthwork – the Rout Yard, whose use in history is disputed.

On that weekend in August 1966, Batemans supplied bar and refreshments there in a big top and a young troupe of actors performed Henry IV, parts one and two.

I’ve looked them all up, every one – most have done alright – still working, a couple of faces you’d know from Sunday telly. One appears most days on social media in the form of a popular gif; he’s still at the Shakespeare too. Another one is a regular in The Archers. Funny how these things turn out.

The girls from Boston High School will sing ‘Sumer is icumen in’ at the end of the performance with the Bishop of Birmingham (who was bishop in Singapore when it fell in 1941).

Now – South West tower. The gritstone crumbles easily, masses of thick cut names gouged into the rocks: BOBBY, AMANDA, AARON, KATH 76, KAREN, A. HAWKE. I can’t place those names in the present, but this is evidence that they were present in the past. There are older letters too, but untraceable under moss and slime.

The reed bed curls from the King’s Tower to the Receiver’s Tower; afternoon toward evening. I check the programme; barbecue, bonfire and fireworks, 8.15pm. Imagine that – August 1966, a Lincolnshire evening, sausages and wood smoke – possibly a traction engine.

‘Sunny Afternoon’ by The Kinks has just been number one in the charts – it’ll be ‘Yellow Submarine’ the next week. The local dignitaries at the refreshment tent admire the chine buffet despite not having a taste for it, perhaps some prize vegetables – a man who grows giant onions and leeks.

Bunting. An imagined past, but close. I’ve looked but can’t find any records of the event, no cine-film, photographs or other ephemera. For all I know the programme I have is the last evidence of that evening outside of memories.

In the churchyard is a headstone in pale Scottish granite with a rose cut onto it.

I did that, made that stone, nearly dropped it in the workshop. Slippery, wet, granite; caught it and saved the stone, but broke the tip of my finger. Flattened it, crushed the bone; never healed properly – always hurts before it rains. My left radius hurts too but that is a different wound.

Evening sky: jackdaws across the Rout Yard. Someone comes to walk a dog around the Castle – a happy, barking spaniel. I jump off the wall and get to reed level; the stalks diffuse and ripple the last of the sunlight.

I check the map on the back of the programme – nicely illustrated – the designer is a name from my past – huh.

I walk where it is clearly drawn that a tug-of-war shall occur, where there is fancy dress and archery and where there are fireworks – no traces.

Look – where the bonfire should be.

I pick the spot as the map suggests and dig with the blade of a French penknife – three inches down, the earth is burned and black.